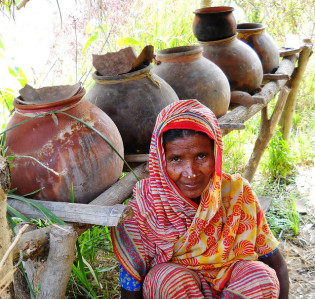 By Sabina Zaccaro
Some 842 million people still suffer from chronic hunger, according to the State of Food Insecurity in the World (SOFI 2013), published Tuesday by the three Rome-based U.N. food agencies. As high as this number seems, it should still be considered progress, since it is is down from 868 million last year.

By Sabina Zaccaro
No one would expect a Pope elected by an extremely conservative conclave to implement revolutionary reforms within the Catholic Church. Still, many see in the newly elected Pope Francis some signs of change.

By Sabina Zaccaro
New data from the United Nations reveals that there has been progress in reducing the number of hungry people worldwide. But an estimate that nearly 870 million people, one in eight, suffered from chronic undernourishment over the last two years is “unacceptable”, experts say.

By Sabina Zaccaro
As the world searches desperately for ways to boost food production by at least 70 percent by 2050 to feed an increasingly hungry planet, many are looking to Africa as the place where a large part of this potential can be realised, mainly for its huge portion of arable land.

By Sabina Zaccaro
While governments make a last desperate attempt to agree on a plan of action for next week's Rio+20 summit on sustainable development – including plans on the transition to a green economy and a set of sustainable development goals – the real economy is already turning green, according to Italy’s minister of environment, Corrado Clini.

By Sabina Zaccaro
The upcoming Rio+20 Conference on Sustainable Development will not succeed if the crises of hunger and malnutrition are not effectively addressed. The issues are so inextricably linked with sustainable development that they have to be part of the agenda, according to a report released Wednesday by the United Nations Food and Agricultural Organisation (FAO) for the upcoming Earth Summit that will take place in Rio de Janeiro from Jun. 20-22.

By Sabina Zaccaro
A diverse blend of coffee is going to pervade the city of Milan in 2015. World producers will come together to show, exchange and market their coffee in a global alliance without geographical-based membership.

By Sabina Zaccaro
Basic income security and access to social services can improve food production and consumption in the developing world, which can be boosted by South-South cooperation.

By Sabina Zaccaro
South-South cooperation can play a key role in boosting the economies of developing countries, but it is not going to replace North-South cooperation, says Nassir Abdulaziz Al-Nasser, president of the 66th session of the U.N. General Assembly.

By Sabina Zaccaro
Of the 17 ministers nominated Wednesday by Italy's premier-designate Mario Monti, not one is a politician.

By Sabina Zaccaro
Civil society organisations and global farmers' networks are gathered in Rome this week to ask governments to stop the "disastrous practice of land grabbing", ahead of next week's Committee on World Food Security.

By Sabina Zaccaro
The track record of the newly elected Brazilian chief of FAO is a promise in itself for civil society.

By Sabina Zaccaro
The influx of migrants arriving from Libya and other African countries has created an unprecedented humanitarian crisis in southern Italy.

ITALY: Berlusconi Gets ‘Automatic Justice’, for a Start

By Sabina Zaccaro
The trial of Italian Prime Minister Silvio Berlusconi on charges of underage prostitution has just taken a turn that some commentators are calling an appropriate twist of fate: the trial, due to begin on April 6, will be adjudicated by a panel of female judges.

By Sabina Zaccaro
While a handful of young sex workers have been under the spotlight in the weeks following a high-profile sex scandal involving Italian Prime Minister Silvio Berlusconi, tens of thousands remain invisible victims of human trafficking.

By Sabina Zaccaro
The demonstration by an estimated million women across Italy Sunday points to a continuing denial of fair opportunities for women at work.
Next Page »
ADVERTISEMENT ADVERTISEMENT