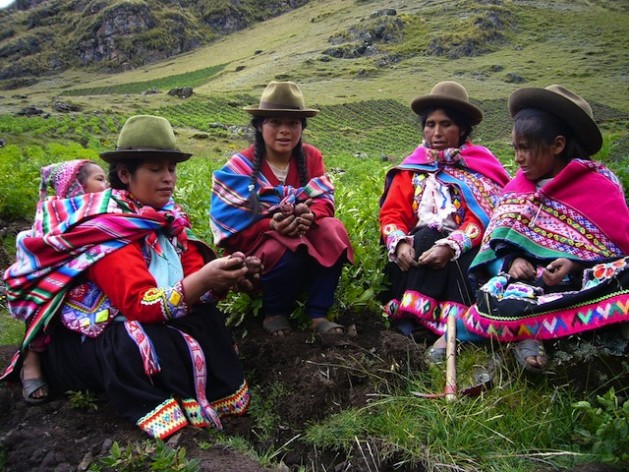 ROME, Feb 24 2012 (IPS) - As the links between food security and climate change become increasingly inextricable, the necessity for sustainable agriculture is now a universal concern.

Smallholder farmers in the global South – who suffer most from changes in climate patterns and the degradation of natural resources, since they live and work in the most vulnerable landscapes – are in urgent need of sustainable agricultural technologies, a reality that was recognised at the annual meeting of the International Fund for Agricultural Development (IFAD), which drew to a close in Rome on Thursday.

Despite ongoing economic and financial crises, developed and developing countries alike – represented by hundreds of development leaders and heads of state gathered in Rome for the 35th session of the Governing Council – committed 1.5 billion dollars to finance agriculture and rural development projects throughout the developing world.

During the two-day event, representatives from IFAD’s 167 member states addressed the connection between overcoming poverty and food insecurity, and discussed how to ensure food security to a growing population while simultaneously protecting the environment.

In December 2011, member states gave a boost to sustainable agriculture with 1.5 billion dollars in new contributions to IFAD.

Now, the U.N. agency says it is scaling up its efforts even further to better link climate-smart technologies and sustainable agriculture in more than 40 countries.

“To help implement IFAD’s environmental policy and climate change strategy, we have developed a groundbreaking initiative called the Adaptation for Smallholder Agriculture Programme, or ASAP, which will help channel (funds) into climate-smart, sustainable investments in poor, smallholder communities,” IFAD’s president Kanayo Nwanze announced in his opening statement at the conference.

Representatives of smallholders, family farmers, pastoralists and fishers from all over the world who gathered here ahead of the meeting called on leaders to jointly address the global challenges of food insecurity and climate change, and asked IFAD to place the needs of smallholders on the international agenda.

“We have the imperative to feed more mouths so we need to intensify our food production systems but this has got to be done in a sustainable way.”

Philip Kiriro from the Kenyan branch of the Eastern Africa Farmers Federation told IPS that the major request from farmers to the international community is that family and small-scale agriculture is “taken seriously.”

“As far as we are concerned, it is the way forward. Farmers provide 80 percent of food in our own country and we believe that they can only do better if the government supports them to organise themselves, to add value to products and act collectively and access profitable markets."

“We’ve already seen changes in pests, in our crops and livestock and we’re having problems in adapting – when seasons change it is very hard for farmers to carry out their operations, especially in Africa where we depend on the rains.”

Kiriro said farmers in his organisations are currently embracing conservation agriculture, and asking researchers to raise seeds and crops that can actually adapt to less water and develop with minimum rain. “We need to be able to prepare ourselves for the changing situation,” he said.

Kiriro believes it is time for African governments to review the Maputo Declaration that requires governments to put ten percent of their annual budgets into agriculture.

“A lot of governments in Africa have not been able to meet that target, which is eight years old now. We should look at a (new) target of 20 percent towards agriculture.”

The private sector can play a role as well, Kiriro said. “We farmers would not be able to completely operate without the private sector. They have a role to play, especially in terms of scaling up research and we’re already seeing that in our country.”

According to Sibanda, farmers and agricultural systems must adapt in order to mitigate the destabilising impacts of climate change.

She added that, though the agricultural sector is responsible for a huge percentage of greenhouse gas emissions, it also has the potential to retain some of those gases in the soil.

Though science has adapted many new techniques, there is no “one science fits all”; rather, technologies need to fit local needs and conditions in a kind of “package”, Sibanda said.

“There is no point in making seed available when (farmers) cannot afford fertilisers.We need to have a systematic approach,” she said, echoing the view of numerous farmers’ networks that economic investments and the transfer of knowledge to farmers need to be combined in order to affect change on the ground.

“Then there is the key role of farmers themselves,” Sibanda said. “They must have the assets for farming but these have been depleted in most cases by recurring droughts and floods. We have not built enough mechanisms to make sure that we absorb the risk and empower the farmers.”

According to Sibanda, while the link between agriculture and food security is clear, there is too little talk about the farmer herself.

“We need to put people first, and those people are farmers, particularly women farmers.”

She stressed that investments must be targeted towards empower the people who form the nexus of the entire food production system.

“Without putting the people who do the farming at the centre of that dialogue there is no ‘agriculture’ to talk about,” she said.

“Since its mandate is to support small-scale and landless farmers, we have demanded that IFAD support agroecology as the model agricultural method to feed the people and to save the planet,” Henry Saragih chairman of the Indonesian Peasant Union (known by the acronym SPI) and coordinator of the global farmers’ network La Via Campesina, told IPS.

Saragih also believes that utilising farmers’ knowledge of sustainable technologies and innovations is crucial in order to empower and strengthen small family farmers and their markets.

These new grants will support a number of initiatives including breaking down gender barriers so women farmers can increase productivity; controlling contamination that affects 25 percent of world food crops; and creating an innovative system to monitor the effects of agricultural productivity on the population and environment.

In a discussion with delegates this week, Rwandan President Paul Kagame emphasised smallholder farmers’ key role in producing more food and overcoming environmental constraints in his country, where agricultural gross domestic product (GDP) has grown at an average of 8 per cent annually, ensuring food security and higher incomes for farmers.

Kagame challenged other African nations to do more to help the growth of their agricultural sector.

Listing the ingredients for “good agricultural policies” in Africa, Sibanda said that strong countries are “those who have committed to developing an investment framework; those who have met their 10 percent target of the national budget for agriculture (as laid out in the 2003 Maputo Declaration on Agriculture and Food Security); those who have allowed their agricultural sector to grow at a minimum of six percent per year; and those who have done infrastructure development and knowledge management, (supplying) farmers with the public services they need.”

With the next round of climate change talks scheduled for June at Rio+20, the United Nations Conference on Sustainable Development in Brazil, all delegates agreed on the critical importance of smallholder agriculture for climate solutions.

Rio+20 marks twenty years since the inauguration of the historical conference in the same city that first launched the multilateral agenda for sustainable development. For the first time in two decades, agriculture has emerged as a critical component in the climate change issue.

“As we go to Rio, let’s make sure that everybody appreciates that there (can be no) sustainable development without (sustainable) agriculture,” Sibanda said, adding that, though people have been “scared” of climate change for years, there is now ample evidence of the worst that is yet to come.

“The time for sustainable development talk is now,” she said.

“Whether you’re in a developed country or in a developing country you’re going to be impacted. The fact that food security is now on the global agenda means that we will all have to see how best can we make it happen despite the challenges we face. We’re calling for more investments in agriculture because food is a sovereign right of people,” she concluded.