ROME, Jun 27 2011 (IPS) - The track record of the newly elected Brazilian chief of FAO is a promise in itself for civil society. 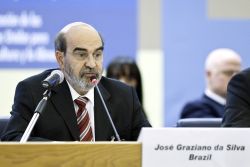 Representatives from the U.N. Food and Agricultural Organisation’s 191 member countries convened on Sunday for a secret ballot vote that designed Brazilian Josè Graziano da Silva as the new director general elect of the Rome-based agency.

The new chief succeeds Senegalese Jacques Diouf, who was first elected in 1993. The new director-general takes over in January 2012 and will remain in charge until July 2015. Following a recently revised rule, he is only eligible for one additional four-year term, while Diouf has been elected to three consecutive six-year terms.

Economist Jose Graziano da Silva, who was FAO’s regional representative for Latin America and the Caribbean, had served as food security minister under former Brazilian president Luiz Inacio Lula da Silva. In that position, he played a key role in the “Zero Hunger” government initiative that brought about a significant decrease in malnutrition in Brazil.

Working closely with civil society, and recognising the central role of women in agriculture, the programme contributed to lifting an estimated 24 million people out of extreme poverty, and to reducing malnutrition by 25 percent in the country, according to official figures.

Graziano’s past success gives hope to civil society organisations, who largely expect an era of consultation and inclusion.

“In the Diouf era the common thinking was that transferring technical knowledge in agriculture was enough to fight hunger,” de Ponte said. “But hunger is largely determined by political choices related to the food market, and hunger grows where you have unfair access to production.”

According to de Ponte, FAO should definitely go beyond the prominently technical role it has had so far, and participate in the debate on economic, trade and financial policies that determine prices.

Of course this cannot be done without consensus by the member states. “The new FAO chief will have to get members’ agreement on the central role of farmers in the fight against hunger in developing countries,” said Francesco Petrelli, president of aid agency Oxfam Italy.

In fact the election showed a clear division between donor and developing countries.

“Divisions became clear in the election process,” Graziano admitted. “But countries of the North, which are the most important donors, are not against me; after the election they all committed to supporting the organisation.”

“We have to work on a minimum consensus so this organisation is not paralysed by these divisions,” he said.

In his first speech to the assembly, Graziano said the election was not a North-South clash, but an exercise in democracy. He thanked Brazilian president Dilma Rousseff and her predecessor Lula for supporting his candidature, as well as the block of Latin American, African and non-aligned countries that voted for him. Europe supported his main rival, Moratinos.

He will certainly not miss support from civil society organisations, as a result of his own inclusive efforts made in Brazil.

“The consultative organ of the Brazilian presidency on nutrition and food security is an example of democracy and inclusion of civil society, in respect of everybody’s roles,” Antonio Onorati from the International Planning Committee (IPC), a global network of NGOs and civil society groups involved in agricultural issues, told IPS.

Consultative meetings with civil society have been stuck over the last three years at the FAO, Onorati said. “We have all known Graziano for many years in his previous positions, and we are confident that a serious cooperation will start again within FAO,” he said.

In their 2011-2020 Agricultural Outlook, FAO and the Organisation for Economic Cooperation and Development (OECD) forecast that real prices for cereals could grow on average by 20 per cent over the coming decade, compared to 2001-2010. Farm output is expected to grow 1.7 per cent annually over the next decade, down from the 2.6 per cent growth rate of the past 10 years.

Agriculture ministers from the G20 major industrialised and emerging nations agreed on an action plan last week in Paris to curb prices. In his first meeting with journalists on Monday, Graziano said it is impossible to predict how long high prices will last, but expressed the hope that the G20 action plan would help, if implemented.

He also stressed the need for a stable financial system as financial markets had ‘contaminated commodity markets’. The FAO will play a greater role in helping developing countries cope with food price volatility, he said, which “is even worse than high prices because of the uncertainty it causes for consumers and producers.”

Explaining priorities ahead, Graziano said FAO will give priority to Africa and play a central role in water resources management. He also pledged to quickly deliver the organisation’s long awaited cost-effective reform.