Jun 7 2012 (IPS) - While governments make a last desperate attempt to agree on a plan of action for next week’s Rio+20 summit on sustainable development – including plans on the transition to a green economy and a set of sustainable development goals – the real economy is already turning green, according to Italy’s minister of environment, Corrado Clini. 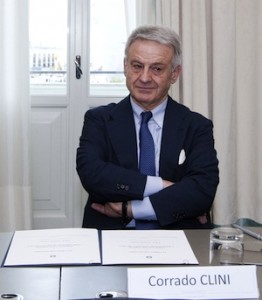 It is extremely hard for governments with vastly different interests and priorities to settle on a common approach to sustainable development, which is why negotiations on the outcome document have been progressing very slowly, Clini told IPS.

The most recent meeting of the Preparatory Committee to finalise the plan of action for next week’s conference failed to reach an agreement. The next, and last, three-day session of the Committee will take place Jun. 13-15.

But while politicians are struggling to move towards a new, environment-friendly development model and agree on a common agenda, national investments in renewable energies and energy efficiency are already in place and growing fast, he said.

Clini said that one of the more realistic expectations for Rio +20 is that it will at least “recognise and reflect this global trend that is already (underway).”

Q: How do you explain the discrepancy between political action and economic progress?

A: Governments will come to a weak agreement, but civil society and private companies are progressing rapidly towards more sustainable standards. The quality of market products – like light bulbs, cars, boilers and now even materials in the building industry – are (moving) towards common standards that are more respectful of the environment. This is true also for emerging economies, where (environmental) standards are higher.

The great expectation after the first Rio conference back in 1992 was that the economy would incorporate sustainability. Over the last twenty years we have seen that this was not accomplished from a political point of view, while technologies made a lot of progress. Technology and politics are two parallel areas progressing at an asynchronous pace.

Q: Do you see any possibility of a convergence between these two areas?

A: There are some interesting combinations. These occur when politics “absorb” progress that is already happening. The European Union’s policy on more efficient lighting systems is an example of absorbing an already consolidated evolution of technology. That phenomenon is also happening in China, where the government is making the most of existing technologies.

So you have the combination of what is already mature in the market with national policies that make progress possible. That should be our goal, and that is what we are already trying to do with biofuels on a global level. It is a complex, but interesting process.

Q: The Italian coalition Global Call to Action Against Poverty (GCAP), which encompasses over 70 civil society organisations, is asking world leaders to equate the green economy with an equal distribution of resources. Is that possible?

A: That is the ambitious goal of so-called ‘inclusive green growth’. The European Union is committed to this comprehensive approach that, many years ago, was called the ‘new world order’.

The answer cannot, of course, come from the Rio conference. Rio +20 will provide us with an updated list of issues, not with the solution to these issues. The EU has its proposals, but not all member countries necessarily share those views.

Q: What are your expectations for next week’s conference?

A: Political outcomes of Rio +20 (such as the weak outcome document) are quite predictable. But there is hope for some other aspects.

The Rio conference can be important for Europe, which needs to build new global partnerships with emerging countries, like China, as it moves towards a low carbon economy. Brazil, with its fossil resources, can also be a key ally in efforts to promote (economic) growth that protects natural resources.

This week the EU environment commissioner (Janez Potočnik) launched the European Resource Efficiency Platform to provide advice on policy measures to (nudge) the European economy towards a more sustainable growth path. The primary task of the platform will be to determine how to achieve the goals set out in the EU Commission’s Roadmap to a resource-efficient Europe, including the issue of decoupling resource use and its impacts from economic growth.

Resource efficiency is a key issue for a growth that is sustainable and inclusive. I think that Rio+20 could give the EU the courage it needs to continue on this path.