Women have to assume the key role of ensuring family livelihoods in the midst of chaos and destruction, and are particularly active in the peace movements at the grassroots level and cultivating peace within their communities. 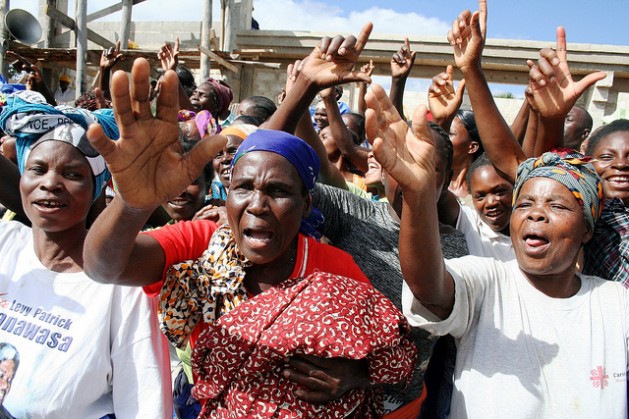 UNITED NATIONS, Feb 23 2012 (IPS) - When the U.N. Commission on the Status of Women (CSW) held its inaugural meeting in London back in 1946, the U.S. delegate, Eleanor Roosevelt, read an open letter to “the women of the world” calling on governments to encourage women everywhere to participate in national and international affairs.

The letter also urged women who are conscious of their opportunities “to come forward and share in the work of peace and reconstruction as they did in war and resistance”.

But 66 years later, the worldwide struggle for gender equality and gender empowerment continues unabated – even as women find themselves discriminated against, and victims of violence, both at home and on the battlefield.

As India’s Permanent Representative to the United Nations Ambassador Hardeep Singh Puri told the Security Council Thursday, close to 90 percent of current casualties in wars and situations of armed conflict are civilians, with the majority being women and children.

“Obviously, women bear a disproportionately large share of the burden of conflict, but have a marginal say in matters of war and peace,” he said, pointing out the irony.

This is perhaps a function of the gender imbalance in our societies, reflected in positions of power and influence, he added.

Despite this, Puri argued, women should not be viewed solely as victims of war.

They also have to assume the key role of ensuring family livelihoods in the midst of chaos and destruction, and are particularly active in the peace movements at the grassroots level and cultivating peace within their communities.

“Therefore, the absence of women at the peace negotiating table is unconscionable,” declared Puri, as he implicitly criticised the fact that peace negotiators are overwhelmingly male.

Yasmeen Hassan, global director at the New York-based Equality Now, told IPS economic downturns bring with them rising fundamentalisms and a clinging to practices and beliefs that pose a challenge to gender equality.

Similarly, she pointed out, war and lack of security lead to a curtailment of women’s rights.

The developing world has seen a lot more instability – economic, political, social – that has often been exacerbated by conflicts, both internal and cross border, that pose the biggest barriers to gender equality.

A 10-day meeting of the 45-member CSW, beginning next Monday, will focus on another battle front: the empowerment of rural women and their role in poverty and hunger eradication and sustainable development.

According to the newly-created U.N. Women, rural women constitute one-fourth of the world’s population of seven billion people. Still, only five percent of agricultural extension services are provided for women farmers, and in rural sub-Saharan Africa, women hold less than 10 percent of the credit available to smallholder agriculture.

“If rural women had equal access to productive resources, agricultural yields could reduce the number of chronically hungry people by between 100 and 150 million,” says U.N. Women.

Asked about the key achievements on gender empowerment in the last five to 10 years, Hassan told IPS, “Everyone agrees that it is an issue that has to be put on the agenda – women’s empowerment has come to be seen as essential for development and, more importantly in current times, for building peace.”

She said the shackles of culture and religion, though still binding women much more harshly than men, have come to be seen – at least internationally – as not inevitable and in fact breakable.

Gigi Francisco, the Philippines-based general coordinator of Development Alternatives with Women for a New Era (DAWN), told IPS that amidst the backdrop of uncertain times for economies worldwide and re-commitments made by the international community to ending poverty and achieving sustainable development, there is a more deliberate focus on ordinary women’s roles in production and consumption across the economic south.

By relieving women’s practical burdens linked to their gender roles, it is assumed that women and their families will become more efficient in accessing and distributing resources that would eventually redound to some degree of empowerment, she said.

At the same time, Francisco pointed out, when women become more efficient in performing their roles, the rest of the society and the entire economy benefit.

Focusing on the issues and concerns of grassroots women is the right thing to do. “However, what is fundamentally wrong with this approach is that without a women’s rights perspective the focus on efficiency confers entitlements to poor women solely on the basis of their labour,” she added.

As well, the approach does not lead to any transformation of the existing gender division of labour that positions women in a subordinated way within families and societies, she added. And being less poor does not mean that the gender gap had become less unequal.

Asked about gender progress, Francisco said the rise in the number of women entering official positions of power and authority at local, national, regional and global levels is a major achievement in one key aspect of gender equality.

This is undoubtedly a clear follow through on obligations set in the Convention on the Elimination of All Forms of Discrimination Against Women (CEDAW) and the 1995 Beijing Platform for Action (BPFA) adopted at the Fourth World Conference on Women in China.

While institutional arrangements and mechanisms for gender equality have provided the framework in progressively realising gender balance in political reforms, changes could not have taken place without the actions by women’s rights advocates and movements that pushed gender equality issues to the realm of public deliberations and resistances.

“In celebrating women who are in positions of power, we must remember that firstly, the situation for women leaders across and within countries considerably vary,” Francisco said.

“Secondly, that gains, even the celebrated ones, may be transient and seriously threatened by a host of neo-conservative reactions that emerge from simultaneous upheavals and uncertainties, and thirdly, powerful women will need to be assessed not in terms of how long they remain as poster girls for gender equality but in terms of their concrete contributions to ensuring that the rights and well-being of ordinary women are secured and promoted.

“And that the processes of governance at all levels remain accountable to women’s rights organisations and movements,” she said.

Related to this, she said, is a big challenge that UN Women now has to face: how it will work out its mechanisms and processes of partnership with and accountability to the women’s movements in a transparent and consultative way.