While the move, made by executive order, was hailed by immigration advocates as a small but positive first step, many others pointed to the political motivations in play – an issue that President Obama implicitly acknowledged on Friday. 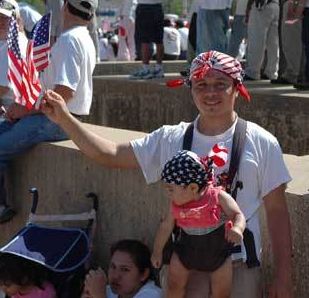 Undocumented immigrants who come to the U.S. as children and are deemed to pose no security risk will no longer be under threat of deportation. Credit: Stephen C. Webster/CC By 2.0

“And I believe that, eventually, enough Republicans in Congress will come around to that view as well.”

Reversing previous policy, undocumented immigrants who come to the United States as children and are deemed to pose no security risk will no longer be under threat of deportation. Instead, the administration ordered that the government begin to make available work permits for those who qualify.

A few other prerequisites also apply: The candidates must have come to the U.S. before they turned 16, must be in school or have graduated from high school (or have been honourably discharged from the U.S. military), and have a relatively clean criminal record.

The changes are to take effect immediately, largely skirting immigration legislation known as the DREAM Act. That bill would offer a route to citizenship for certain young immigrants, but has languished in Congress for years.

Following Friday’s announcement, the National Immigration Law Center here in Washington called the day “momentous … a hard-won victory”. The non-partisan Migration Policy Institute said that the policy reversal could have a direct impact on 1.4 million youths, while cautioning that implementation would be tricky with a programme of this size.

At Lafayette Park outside of the White House, a crowd of jubilant supporters cheered the news, holding up signs that read “Keep the DREAM alive” and “You have my vote now.”

“This is a matter of human rights,” Sebastian Roa, a student at the University of Maryland at the rally, told IPS. “I was undocumented for 13 years, and I always had to wonder what would happen to me.”

“It’s a Hispanic issue but it’s also an overarching issue for many races,” he continued.

Another at the rally, Deepak Bhargava, a community organiser, called the news a “big victory”, but cautioned that it was “not the final step”.

“The biggest challenge is to get people to vote in November,” he said. “Alienating Latinos now, is a recipe to becoming a minority party in the future.”

Indeed, despite the accolades, it is hard to see the timing of the issue outside of its political context.

The move comes as the 2012 presidential race heats up, with immigration receiving vastly increased attention from both of the frontrunners. Mitt Romney, the Republican candidate to oppose Obama, has in the past stated that he would veto the DREAM Act if he were to become president.

Romney is also fighting the president for the Latino vote. According to the Washington Post, Romney told supporters in April, “We have to get Hispanic voters to vote for our party” or they would lose the election.

President Obama, while keen to take credit for Friday’s announcement, has suffered severe criticism over the past three and a half years of his presidency for failing to push through a significant immigration overhaul, despite repeated promises.

When Obama took on health-care reform as a signature issue shortly after becoming president, many suggested that immigration would be next on the agenda.

As the health-care issue led to massive resentment from Republicans, however, the resulting ratcheted-up polarisation in Washington took away much of President Obama’s motivation – and political capital – to tackle another contentious issue so quickly.

Since then, the administration has been unable to deliver for those calling for immigration reform.

Meanwhile, the strength of the Latino vote has been growing. This is based in part on demographics, with an estimated 50,000 Latinos every month turning 18, the legal age to vote in the United States.

Some experts have suggested that whoever wins the presidency in November will need around 40 percent of the country’s 14 million Latinos to do so. A recent analysis put out by the Brooking Institution suggested that the broader minority vote would be even more important for an Obama victory this year than last time around.

In addition, however, reports suggest a higher political consciousness among Latino, particularly youths – spurred in particular by the country’s nasty immigration debate in recent years.

This week, Jeb Bush, the popular former governor of Florida and brother of former president George W. Bush, made political waves when he suggested that the Republican Party needed to change its tone on immigration.

On Friday, another Florida Republican, Senator Marco Rubio, thought to be a frontrunner to become Mitt Romney’s vice-presidential candidate, criticised Obama’s move for its unilateral legislation.

“Today’s announcement will be welcome news for many of these kids desperate for an answer, but it is a short-term answer to a long-term problem,” Rubio said. “And by once again ignoring the Constitution and going around Congress, this short-term policy will make it harder to find a balanced and responsible long-term one.”

Another Republican member of Congress, Steve King, went even further, saying that he plans to sue the Obama administration over the new policy.

King charged President Obama with “planning to usurp the constitutional authority of the United States Congress and grant amnesty by edict to one million illegal aliens”.