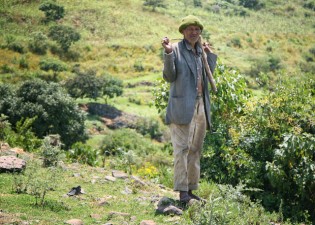 By Ed McKenna
Ethiopia may be one of the fastest-growing, non-oil producing economies in Africa in recent years, but corruption in this Horn of Africa nation is a deterrent to foreign investors looking for stable long-term partnerships in developing countries.

By Ed McKenna
Ethiopia’s long-term hydropower strategy is proving to be both a source of economic sustenance and contention. In becoming Africa’s leading power exporter through the construction of a series of dams across the country, Ethiopia could threaten the lives of millions who depend on the Nile River’s waters.

By Ed McKenna
Africa’s smallholder farmers, who contribute 80 percent of food and agricultural production in sub-Saharan Africa and much of the world’s food supply, are being encouraged by big business, governments and NGOs to become less subsistence based and more entrepreneurial by tailoring production to market forces.

By Ed McKenna
The world received contradictory signals about Ethiopia’s human rights record when in the same week it was elected to the United Nations Human Rights Council, a major German charity closed its Ethiopian office in protest against a restrictive political environment.

By Ed McKenna
The death of Ethiopia's leader of 21 years has raised fears of instability in one of Africa's fastest-growing non-oil producing nations, which could potentially slow investment activity.
ADVERTISEMENT ADVERTISEMENT