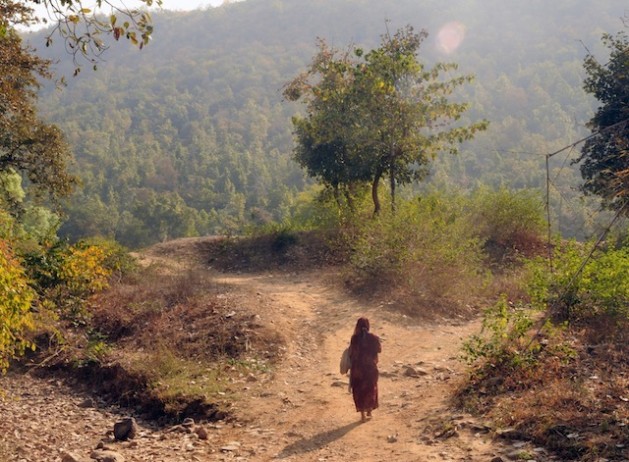 NEW DELHI, Feb 22 2013 (IPS) - Over a decade ago, the Dongria Kondh tribe – tucked away in the Niyamgiri hills, a mountain range in the eastern Indian state of Orissa – found itself under attack.

For centuries the tribe had lived peacefully in the hills, worshipping the sacred ‘mountain of law’ and protecting the forests surrounding it. But when the London-based Vedanta Resources mining conglomerate discovered a rich deposit of bauxite atop the same mountain, the community found their ancient land suddenly up for grabs.

According to Ashish Kothari from the conservation NGO Kalpavriksh, linear projects outlined as crucial for economic development often lead to a host of highly negative environmental consequences.

“Roads, railway lines and transmission lines through forests cause fragmentation and risk killing animals (dozens of elephants have been killed attempting to cross railways),” he told IPS.

“They also divide villages or clusters of villages, with serious impacts on social and economic relations. Linear projects through waterways can impact breeding of species by blocking their movements.”

In 2006 the company inaugurated a factory at the foot of the mountain to convert the exceptionally high-quality bauxite into aluminium. Almost immediately, the tribal population began to feel the impacts of pollution in the air and water.

A crucial step along the way to victory was the amendment of the 2006 flagship Scheduled Tribes and other Traditional Forest Dwellers (Recognition of Forest Rights) Act, making it mandatory for developers to first obtain the consent of gram sabhas (or village councils) before commencing work on projects that would affect forest dwelling communities.

Today, the fruits of that hard-won struggle – which secured some degree of protection for the rights and environment of endangered tribal communities in India – are once again under threat.

Earlier this month the ministry of environment and forests (MoEF) retracted the clause in the 2006 Forest Rights Act (FRA) that gave tribal groups the power to reject major infrastructure projects that endanger their land and livelihoods.

The ruling, made public on Feb. 5, stated that “linear” projects – meaning those involving the construction of roads and canals, and the laying of pipelines, optical fibres and transmission lines — will all be exempt from the need to acquire consent of village communities affected by the clearance, diversion and pollution of their forest land.

The government thus gave itself – and its many private partners — the green light to divert forests or displace tribal communities at will.

The ruling also effectively renders powerless the guideline contained within the FRA that “no member of a forest dwelling Scheduled Tribe or other traditional forest dweller shall be evicted or removed from forest land under his occupation till the recognition and verification procedure is completed.”

Dr. Swati Shresth from the Global Forest Coalition told IPS the MoEF’s ruling is “a continuation of land grabbing and a violation of the rights of traditional forest dwellers in the name of development, economy and national good”.

The decision to exempt linear projects is the first step towards diluting the FRA, according to Ashish Kothari from Kalpavriksh, one of India’s oldest development and conservation NGOs.

“Over the last few years the government has hardly implemented the FRA, and now that communities are asserting their rights by using it to resist projects they consider damaging to their environment and livelihoods, the government is desperate to find ways to bypass them,” Kothari told IPS.

The recent controversial decision has sparked an outcry resulting in letters of protest to the Prime Minister’s Office (PMO) signed by a coalition of international rights organisations including Oxfam and Rights and Resources, as well as a letter of protest signed by a large group of Indian lawyers. 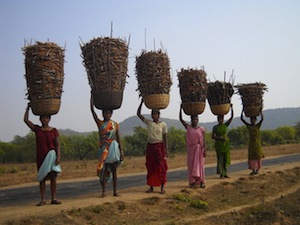 For over seven years, India’s village councils have leveraged provisions in the FRA to block attempts by the South Korean Pohang Steel Company (POSCO) to forcibly acquire their land.

In early February there were attempts to evict farmers from their land in the Jagatsinghpur district of Orissa, in order to make way for a giant, 12-billion-dollar steel plant with a capacity of four million tonnes.

Various Indian and international organisations – including South Korean NGOs – have registered their disgust at the violent attempts to forcefully acquire the land.

According to a statement released on Feb. 3 by the All India Forum of Forest Movements (AIFFM), “Around 4,000 families who will be affected by the project do not want their homes and livelihood sources to be ceded for construction of the integrated steel plant.”

Thanks to the new ruling, these communities no longer have a legal leg to stand on in defense of their land.

In response to concerns that the recent decision could diminish the state’s capacity to safeguard tribal rights, Tribal Affairs Minister Kishore Chandra Deo assured IPS that the government “will always remain committed to strengthening the gram sabhas of India”.

“A Dangerous and Twisted Precedent”

On Feb. 15, 2013, the Ministry of Environment and Forests (MoEF) re-confirmed in an affidavit to the Supreme Court its position that mining by the British mining company Vedanta in the Niyamgiri mountain would violate the forest rights of the local Dongria communities.

It stated that the Forest Rights Act (FRA) should be upheld to protect or manage the community forest reserve as well as other traditional and customary rights of the tribal community in India.

But in what will be a landmark ruling, the MoEF proposes to modify how the FRA is implemented by mandating that consent is required only from Primitive Tribes and limited only to their rights of tenure and the religious aspects of their culture - as in the case of the Niyamgiri mountain – while all other forest rights can be "extinguished using the eminent domain of the state", states the affidavit.

The original text of the FRA called for consent from forest communities for any diversions in their area - not just sacred places but also for land necessary to maintain their cultural integrity over their habitation, subsistence, and food supply.

Ville-Veikko Hirvelä, a specialist in international agreements at Friends of the Earth-Finland, told IPS, “The FRA is at risk of being (weakened) if the Supreme Court ruling follows the inaccurate MoEF affidavit's suggestion.

“That would set a very dangerous and twisted precedent for further implementation of the FRA”, which could be diluted by limiting forest rights and consent of communities to those areas that are home to Primitive Tribes or places of worship.

In fact, last year, the Tribal Affairs Ministry wrote, “The consent of the gram sabha, with at least a 50 percent quorum…is the bare minimum that is required to comply with the Act before any forest area can be diverted, or destroyed”.

That even this “bare minimum” requirement has now been revoked does not bode well for tribal rights.

“By withdrawing this major provision, the government can pretend to hold ‘consultations’ in the form of public hearings but negate the core principle of the FRA – the right of communities to determine what happens to their environment,” Shresth told IPS.

According to Sanjay Basu Mallick from the AIFFM, “This (decision is supposedly) about the county’s flagging GDP and creating access for mining industries in the name of economic development.

“But in human terms this is an undemocratic step towards total neglect of the development and welfare of forest communities,” he told IPS.

Growth in Asia’s third-largest economy slowed to its weakest in nearly a decade to 6.2 percent in the fiscal year ending in March 2012, announced the International Monetary Fund in a report released early February.

The international lending organisation blamed a lack of investment in infrastructure and delays in land clearance for industrial projects as major reasons for the drop in GDP.

Prime Minister Manmohan Singh’s government is taking steps towards boosting the economy, including a raft of pro-market reforms announced in 2012. Despite these reforms to restore growth, the IMF believes that “more needs to be done”.

Last November, a leaked report from the Prime Minister’s Office recommended “diluting” tribal rights, likely in response to pressure from mining conglomerates and related industries to expedite clearance on major projects. According to the National Highways Authority of India, a total of 101 infrastructure projects, including 32 road projects, have been stalled due to clearance delays.

“The PMO has been lobbying the MoEF to amend the 2009 order due to increasing pressure from the private sector on him to speed up clearance for large mining operations to commence,” Basu Mallick told IPS.

The MoEF finally buckled last December, when it announced that existing coal mining projects could bypass the process of a public hearing, as stipulated in the FRA, and receive a one-time capacity expansion of up to 25 percent.

That move now finds echo in the recent reversal of the FRA provision for tribal consent, experts say.

“The broad context to this is that in the blind pursuit of economic growth, processes such as local community consent are seen as impediments rather than essential aspects of a genuine democracy,” Kothari noted.