BHUBANESWAR, India, Jun 24 2011 (IPS) - Fourteen-year-old Satikanta Sahu loves going to school, but these days, he would rather spend his time manning the barricade and facing down policemen in the sandy coastal village of Govindpur in India’s eastern state of Orissa. 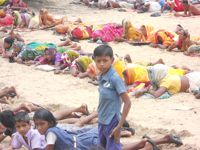 Villagers hug the ground to stop construction of the steel plant. Credit: IPS.

While his mother and their neighbours lie on the ground hugging the sands to form a round-the-clock human barricade, Sahu runs errands, bringing them drinking water and occasionally shouting slogans.

His slogans rebuke the Orissa government for plotting to wipe out their village to give way to a 12- billion-dollar steel plant. The plant, to be built and run by South Korea’s Pohang Steel Company (POSCO), will have a capacity of four million tonnes and is touted to be the largest Foreign Direct Investment (FDI) in India, Asia’s third largest economy.

The Orissa government says the plant needs a total of 3,719 acres, of which only some 150 acres are private land, the rest being forest and government land. But it is the 150 acres that are highly contentious, because they are home to 613 families whom the plant will displace.

These families are concentrated in Govindpur and the neighbouring village of Dhinkia, where they make a living growing betel leaves.

At the forefront of the protest are women and children, Sahu among them. “I love going to school. But I have been here for many days now, because this is our livelihood,” he says. “We want POSCO to go back. We will not allow the designs of Naveen Patnaik (Orissa’s chief minister) to succeed.”

As India tries to industrialise and attract foreign investment, it faces resistance from villagers and farmers reluctant to part with land on which they are rooted. According to a study last year by leading business chamber ASSOCHAM, delays in land acquisition are threatening investments worth 100 billion dollars, while at least 22 major steel projects worth 82 billion dollars are stalled because of protesting farmers and activists.

As the protest of more than 2,000 people against POSCO continues, the Orissa government has deployed over 800 police to the site.

The villagers, under the umbrella of POSCO Pratirodh Sangram Samiti (PPSS, which means Group to Resist POSCO) have formed a three-tier barricade at the entry to the village and keep a round-the- clock vigil.

The Orissa government has called the acquisition move a peaceful process. Protesters and activists say, however, that the government is coercing them into giving in by deploying a huge number of police officers to the area.

“Of the total 3,719 acres needed for the project, 2,958 acres is forest land for which we have got required clearance from the federal government’s environment ministry,” Orissa Industry Minister Raghunath Mohanty told IPS.

“About 608 acres are revenue land (government land). We need to acquire only 152 acres of private land where about 613 families will be displaced,” informs Mohanty.

While the government decided to temporarily halt land acquisition in the face of protests, the villagers say they will fight to their last breath and keep continuous vigil. From Jun. 8 onwards, over 400 students have joined the protest meetings, along with more than 2,000 women and elderly members. Now, the activists are planning to hold classes on the frontlines, so that students can keep protesting and not miss their studies.

“The government calls it a peaceful land acquisition programme, while the truth is that meetings are on in the administration and a blue print is being prepared to enter Govindpur forcefully,” says PPSS leader Prashant Paikray.

The activists fear the government is planning a repeat of Kalinganagar, another area in Orissa’s Jajpur district. There, in January 2006, tribal people protested the construction of a steel plant by India’s iconic Tata Group and were fired upon by police, resulting in the death of 12 people.

“Why is the government and the state upset over the so-called biggest FDI, when we for generations to come could remain happy and prosperous with our vibrant economy of pan (betel), mina (fish) and dhan (paddy) without any such project which promises only to destroy everything around us?” asks Abhay Sahoo, one of the leaders of the protest movement.

“This is one area in the country where the Forest Rights Act (FRA) 2006 has been grossly violated and various government appointed committees even corroborated that,” says Sahoo.

Earlier this year, India’s Union Environment Minister Jairam Ramesh gave clearance to the POSCO project on certain conditions. Yet a panel set up by the ministry itself suggested last October that the project violated coastal regulations and forest rights laws.

The four-member panel, headed by India’s former environment secretary Meena Gupta, probed the issue and differed in their views. But a majority of three panel members recommended the revocation of the environmental clearance given to POSCO in 2007.

The majority of the panel said POSCO-India Pvt. Ltd has not been able to address all the issues relating to Coastal Regulatory Zone notifications, and identified a number of serious lapses and violations, including suppression of facts.

Later, in a press statement, POSCO said it “never violated any law or procedure for obtaining any governmental clearance whatsoever required for the Project.”

“After five long years of MOU (Memorandum of Understanding), we have not been able to commence any operation, owing to our commitment to obtain all necessary statutory clearances before commencing any operation,” POSCO said.

While POSCO seems to have overcome the environmental clearance hurdle despite the views of the panel, for now, only the human barricades and steely resolve of the villagers stand in POSCO’s way.