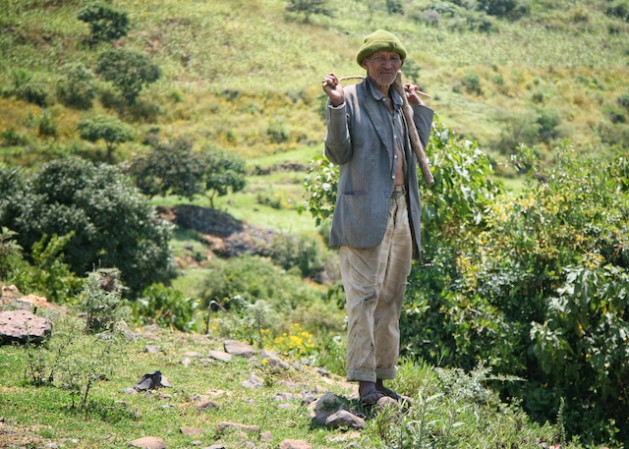 There are unconfirmed reports of the Ogaden’s predominantly pastoralist population in southeastern Ethiopia being forcefully removed from land close to oil deposits. Credit: Rudolph Atallah/IPS

ADDIS ABABA, Feb 23 2014 (IPS) - New allegations of scorched earth evictions of the Ogaden people have raised concerns that a lack of benefit sharing could escalate instability in the region and reinforce separatist tensions as foreign energy companies prepare to extract oil and gas from troubled southeastern Ethiopia.

“The resources in this region will make Ethiopia rich but will keep us impoverished. A settlement is all we can hope for to protect our claim to some of the economic advantages of our natural resources,” Ogaden National Liberation Front (ONLF) founder Abdirahman Mahdi told IPS.

The demise of Ethiopian dictator Mengistu Haile Mariam triggered a two-decade conflict between the government of Ethiopia and the ONLF, which began in 1994. The ONLF has been fighting for self-determination of the eight to 10 million Somali ethnic population living in the Ogaden basin within the Somali National Regional State (SNRS).

The government’s heavy paramilitary response to the insurgency has created “a humanitarian crisis throughout the Ogaden [basin] where half of the population live through famine,” said Mahdi.

Reports of forced evictions and human rights abuses in the vicinity of oil and gas fields is creating a new wave of grievances against the government in local communities.

“The army came to our community and burnt our homes and our crops. Our situation is getting worse as the military want many villages removed because of the search for gas.

“Many people in this area have been arrested. We don’t know where they are or if they are alive. Our situation is very bad,” one Ogaden man, who asked to remain anonymous, told IPS.

Ethiopia has been Africa’s fastest-growing economy in recent years and could soon be an oil-producing economy. However, a government embargo on the Ogaden has severely isolated the region’s predominantly pastoralist population from Ethiopia’s development gains. Any prospect of consultation over resource extraction at this stage look slim, says Ogaden expert Professor Tobias Hagmann from the Roskilde University in Denmark.

"Our situation is getting worse as the military want many villages removed because of the search for gas. Many people in this area have been arrested. We don’t know where they are or if they are alive." -- Ogaden villager

“It is very unlikely that the local population will be consulted about local projects. They are not allowed to voice political dissent. How can they be allowed to participate in local decision-making related to development plans,” he told IPS.

Government spokesperson Shimeles Kemal told IPS that oil and gas riches “will contribute to the development of the SNRS including the Ogaden region.”

The Ethiopian government has been criticised by rights organisations for preventing NGOs from providing humanitarian aid to one of the poorest regions of Ethiopia and creating an exodus of thousands of refugees.

Amnesty International’s researcher on Ethiopia  Claire Beston told IPS that the Ethiopian government’s clampdown on the Ogaden Somali population “has severely restricted access to and within the region, including that of humanitarian agencies, and has also placed major restrictions on information coming out of the region about the true state of the humanitarian and human rights situation there.”

In December 2013 the Ogaden European Diaspora Association sent a letter to the European Union requesting that aid to Ethiopia be withheld as long as human rights abuses continue against the Ogaden.  “We are living under political and economic embargo. We demand that NGOs move freely as the humanitarian situation is critical,” Mahdi said.

Chinese oil company, GCL Poly Petroleum Investment, signed a deal with Ethiopia in November 2013 to develop gas reserves at Calub and Hilala in the Ogaden region.  A month later, the ONLF accused government militia, the Liyu police, of burning swathes of pasture belonging to communities close to Calub and Hilala gas fields.

A military clampdown in the region has made verifying such reports impossible. However, Human Rights Watch (HRW) reported in 2012 that the Liyu police had been responsible for extra-judicial killings as a form of collective punishment.

“The Liyu police had summarily executed 10 men during a three-day rampage on a series of villages. These attacks, as previous abuses that get carried out by the Ethiopian government as part of its counter-insurgency campaign, take place in a context of complete impunity,” HRW researcher Laetitia Bader told IPS.

Much needed dialogue seems to be the only way to reduce feelings of disaffection in the major Ogaden clan, the Darod, which accounts for close to half of the Somali population in Ethiopia and constitutes the backbone of the ONLF.

However, faltering peace talks between the ONLF and the Ethiopian government broke down in Kenya in September 2012 and the resumption of talks could be further delayed since the abduction of two ONLF negotiators in January by Ethiopian security in Nairobi.

“The ONLF has a valid claim about the lack of accountability of international oil companies operating in the Ogaden. Further, the major clan family in the region is very much frustrated by continuous harassment and an absence of political and civic rights,” said Hagmann.