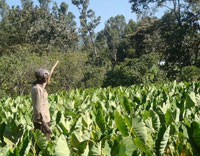 “It was common to experience chronic food shortages due to drought or crop disease. My children were even too weak to go to school,” Datta told IPS. Datta and a number of other farmers in this Horn of Africa nation are experiencing improving food and livelihood security since the introduction of hybrid seed here.

Ethiopia currently prohibits the use of GM crops. “The old seeds gave us a small crop. But the new seeds consistently provide us with a much better harvest every year … Since our increased yield they have more energy to attend and get an education,” said Datta who produces tuber crops. In 2010, the FAO initially gave him 100 kgs of improved taro seeds from which he was able to harvest 800 kgs.

The Ethiopian government is trying to transform the country’s agricultural sector through the Ethiopian Agricultural Transformation Agency (ATA). ATA believes “not all seeds are created equal” and has been investing in improved, higher-quality, higher-yielding seeds as a strategy to raise productivity on many Ethiopian smallholder farms.

He added that the organisation was also providing training to local farmers. “Improved seeds and improved knowledge,” he said. Knowledge sharing between farmers plays a major role in community food security.

Wondimagegne says that the initiative’s targeted farmers have shared their new seeds, which has increased knowledge transfer exponentially and created “a multiplication effect”. “There is a good cultural practice of farmers sharing with friends and relatives. We have observed that farmers share the knowledge and the planting material without any imposition.”