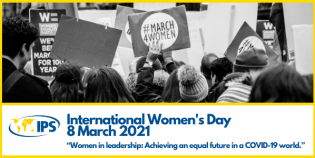 “Women in leadership: Achieving an equal future in a COVID-19 world.”

On this occasion, IPS Inter Press Service is pleased to bring to it’s readers, opinions, views and perspectives of women leaders on the Covid19 crisis, the centrality of women’s contributions and the disproportionate burdens that women carry.

By Thalif Deen
As the deadly coronavirus spread across the five boroughs, New York city (NYC) was a on a locked down mode with the closure of public schools, the shutting down of sporting events, restrictions on Broadway shows and limiting the capacity at bars and restaurants.

By Thalif Deen
Faced with a potential pandemic of the deadly coronavirus, New York city officials took a series of preventive measures to stall the spread of the disease as it was spinning out of control in China.

By Thalif Deen
The streets of New York city were the center of the fourth annual Global Women’s March when tens of thousands of women, along with men, joined hands to defend and advance the cause of women’s rights worldwide.

By Thalif Deen
A rash of anti-Semitic attacks in New York and New Jersey has prompted the formation of a new unit, within the Police Department’s (NYPD) intelligence bureau, to investigate terror threats from far-right and neo-Nazi organizations.

By Thalif Deen
The protest was described as a revolt of the commuters, as demonstrators crowded in the cavernous Grand Central Station in a show of strength. The demands included free transportation and safer subway.

By Thalif Deen
When the UN General Assembly begins in mid- September every year, chances are more than 150 world leaders gather under one roof triggering security nightmares and turning the neighborhood into a veritable war zone, including road closures, deployment of metal detectors, concrete barriers to prevent unauthorized traffic and baggage and pat-down screenings.

Nigerian Returnees Learn the Ropes of Business Development at Home

By International Organization for Migration
“Before I travelled to Libya, I was into phone sales and repairs and palm oil production, but I left my business to migrate due to challenges like power outages,” said Onyekachi as she stood in a room full of fellow returnees. “With this training, my dream will come true because I have been grouped into an agriculture-based business.”

IOM and Humanitarian Actors Respond to Needs in Tripoli

By International Organization for Migration
IOM, the UN Migration Agency, has responded to the urgent humanitarian needs of hundreds of displaced Libyans and migrants affected by violence, following armed clashes in the Libyan capital.

By International Organization for Migration
Following the New York Declaration for Refugees and Migrants in 2016, United Nations Member States, for the first time in their history, committed to develop, negotiate and adopt a Global Compact for Safe, Orderly and Regular Migration (GCM).

Cursed or Blessed? Nigerian Victims Of Trafficking Can Finally Break The Oath

By International Organization for Migration
“When an acquaintance told me there might be work for me in Austria, I jumped at the opportunity. She told me how good Austria was so I figured I would just get there, find work and settle in. They told me the journey was easy so I decided to give it a go.”

By International Organization for Migration
IOM, the UN Migration Agency, reports that 67,122 migrants and refugees entered Europe by sea in 2018 through 26 August, with 27,994 to Spain, the leading destination this year. This compares with 123,205 (172,362 for the entire year) arrivals across the region through the same period last year, and 272,612 at this point in 2016.

Global refugee resettlement: What do the statistics tell us?

By International Organization for Migration
Resettlement has long been an important mechanism for refugee protection, and one that promotes international solidarity and durable solutions. In recent years and against a background of large-scale global displacement, the potential of resettlement to provide solutions for the worsening global refugee situation has been debated.

By International Organization for Migration
One year into a crisis that has seen over 700,000 refugees escape violence in Myanmar by fleeing into Bangladesh, the Rohingya once more stand on the verge of another disaster if more funding for the humanitarian response cannot be secured.

By International Organization for Migration
The UN High Commissioner for Refugees Filippo Grandi and the Director General of the United Nations Migration Agency, IOM, William Lacy Swing appealed for greater support from the international community to the countries and communities in the region receiving a growing number of refugees and migrants from Venezuela. With an estimated 2.3 million Venezuelans living abroad, more than 1.6 million have left the country since 2015, 90 per cent of them to countries within South America.

By Kelli Rogers
Concrete replaces hand-dug mud steps zigzagging down steep hillsides. Sturdy bridges stretch over marshes, and a main road carves a bumpy path through once inaccessible zones. The mega-camp that sprawls across 6,000 acres of Bangladesh’s Ukhia region has changed greatly in the year since it became home to 700,000 additional Rohingya refugees fleeing violence and persecution in Myanmar’s Rakhine state.

By Amnesty International
Responding to the news that human rights defender Tep Vanny has been released from prison following a royal pardon after more than 700 days in detention, Minar Pimple, Amnesty International’s Senior Director of Global Operations, said: “After more than two years of being unjustly detained for her peaceful activism, the news that Tep Vanny is once again reunited with her family is a cause for great celebration.

By International Organization for Migration
A major environmental project to provide around 250,000 families with liquid petroleum gas (LPG) stoves and gas cylinders has been launched by UN agencies and the government in Cox’s Bazar, Bangladesh, to help prevent further deforestation linked to the Rohingya refugee crisis.

By Thalif Deen
A rare closed-door meeting between the United States and North Korea was described as a major breakthrough—the first time in nearly two decades.

By Thalif Deen
When Hollywood movie mogul Harvey Weinstein arrived for his arraignment on charges of sexual abuse, there were hordes of photographers and reporters waiting for him outside the New York Supreme Court.
Next Page »
ADVERTISEMENT ADVERTISEMENT