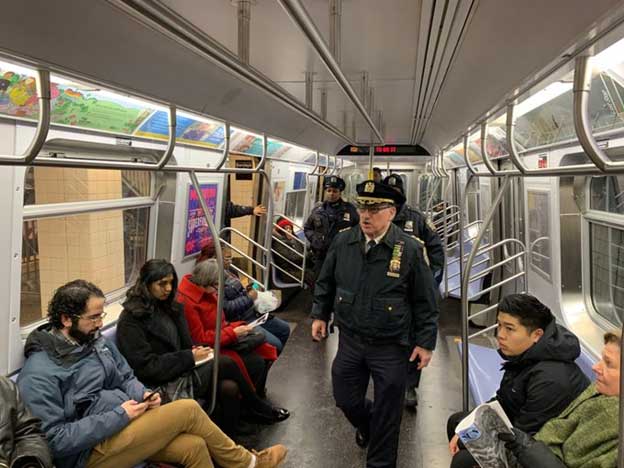 NEW YORK, Nov 15 2019 (IPS) - The protest was described as a revolt of the commuters, as demonstrators crowded in the cavernous Grand Central Station in a show of strength. The demands included free transportation and safer subway.

A Twitter video appealed to commuters to skip fares, damage turnstiles and engage in a mass sabotage of the Metropolitan Transportation Authority (MTA).

NYPD Chief of Department Terrence Monahan said on twitter: “This morning, a group of individuals vandalized subway stations. We believe the same individuals will attempt to disrupt the evening commute by causing disorder, endangering commuters – and even attempting to physically assault our officers. IT WILL NOT BE TOLERATED.”

“While the NYPD will always protect people’s right to protest, we will not accept illegal behavior that threatens the safety of others. Those who break the law will be arrested,” he warned said in a subsequent video message.

The demands of the protesters were summed up as follows: No cops, no fares, full access, full service.

The NYPD arrested 13 people and gave out 11 summonses, while the MTA police made three arrests and eight summonses.

Meanwhile, three masked members of the protest group were seen in a Twitter video encouraging people to skip fares, damage turnstiles and engage in a mass sabotage of the MTA, as followers were directed to a demonstration at Grand Central station.

After marching out of Grand Central, the protesters, numbering over a hundred, dispersed, and were later seen in the streets of Brooklyn.

Those actions divert valuable time, money and resources away from investments in transit services that get New Yorkers to their jobs, schools, doctors and other places they need to go.

He warned that “the MTA has zero-tolerance for any actions that threaten the safety of the public and our employees, and impede service for millions of customers. We are monitoring conditions as we cooperate with the NYPD and MTA PD to maintain service while ensuring everyone’s safety,”