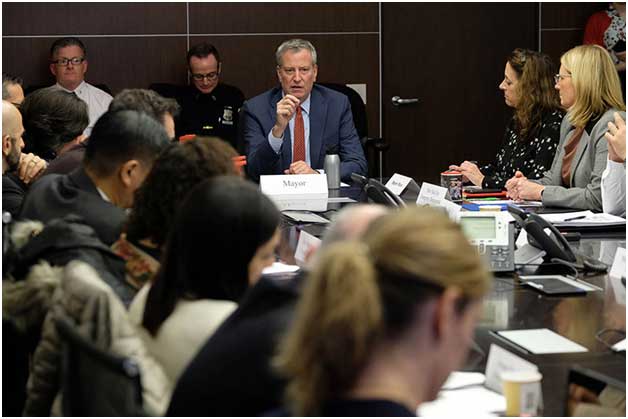 NEW YORK, Feb 2 2020 (IPS) - Faced with a potential pandemic of the deadly coronavirus, New York city officials took a series of preventive measures to stall the spread of the disease as it was spinning out of control in China.

Mayor Bill de Blasio told news reporters at the Bellevue Hospital Center in Manhattan: “With the best emergency response teams in the nation, New York City stands ready to respond to any potential cases of the coronavirus.”

“We will remain vigilant and ensure New Yorkers have the facts they need to stay safe”, he said at a briefing on February 1.

With the New York City Health Commissioner Oxiris Barbot by his side, de Blasio said: “We take the threat of this illness very seriously.”

And “robust measures” will be continued to ensure the virus has not — and does not — spread, said Barbot.

Barbot said the virus is only spread through “droplets,” such as from a cough or sneeze.

The mayor said he was also trying to obtain permission for the city to conduct its own coronavirus testing.

At present, only the Centers for Disease Control and Prevention (CDC) in Atlanta has that lab capability, and test samples must be sent there for testing.

“There is still a lot that we do not know,” de Blasio said. “What we do know causes us a tremendous amount of concern. We will use all measures at our disposal to protect New Yorkers.”

The briefing followed the first case of corona virus in a city with the population of over 8.3 million people, and one of the most populous in the US.

A woman hospitalized in Bellevue Hospital Center might have been infected by the virus, according hospital authorities.

A second patient was tracked down on February 2 at the Flushing Hospital Medical Center in Queens.

As of Monday, there were eight suspected cases of the coronavirus in the US and over 17,000 worldwide, mostly in China, where the disease originated in Wuhan with a population of 11 million people.

The City remained on a 24-hour alert, particularly the Kennedy International, La Guardia and the Newark Liberty international airports—all of which come under the supervision of the Port Authority of New York and New Jersey.

Meanwhile the CDC recommended that New Yorkers avoid non-essential travel to Wuhan. For travel deemed essential, the Health Department has shared the following CDC recommendations with healthcare providers regarding travelers to Wuhan:

• Avoid contact with sick people
• Avoid animals (alive or dead), animal markets, and products that come from animals (such as uncooked meat);
• Wash hands often with soap and water for at least 20 seconds.
• Use an alcohol-based hand sanitizer if soap and water are not available.
• Older travelers and those with underlying health issues may be at risk for more severe disease and should discuss travel to Wuhan with their healthcare provider.