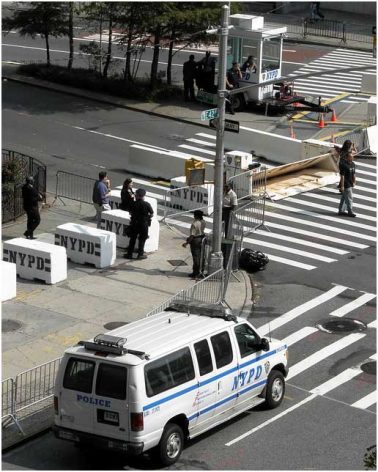 UNITED NATIONS, Sep 30 2019 (IPS) - When the UN General Assembly begins in mid- September every year, chances are more than 150 world leaders gather under one roof triggering security nightmares and turning the neighborhood into a veritable war zone, including road closures, deployment of metal detectors, concrete barriers to prevent unauthorized traffic and baggage and pat-down screenings.

And this year was no exception—both in terms of security and the number of world political leaders in town.

The only thing missing, one exasperated UN official joked, was a drawbridge at the entrance to the UN building secured by a moat full of crocodiles: something similar to what US President Donald Trump proposed building at the Southern border to prevent illegal immigrants finding their way into the United States.

For nearly 10 days, UN security was reinforced by US law enforcement agencies, including the New York Police Department (NYPD), the Federal Bureau of Investigation (FBI) and the US Secret Service (assigned to all visiting heads of state and heads of government.)

The security every year has been so tight—and so professional, as it was this year– that there were no incidents causing alarm.

Thousands of NYPD vehicles were part of the approximately 200 escort convoys during the weeklong General Assembly sessions which concluded last week.

Police Commissioner James P. O’Neill said “just as the men and women of the NYPD work tirelessly to keep New Yorkers safe each and every day, UN Member states represented in the 74th session of the UN General Assembly are welcomed to New York City knowing that the NYPD is committed to ensuring their safety”. 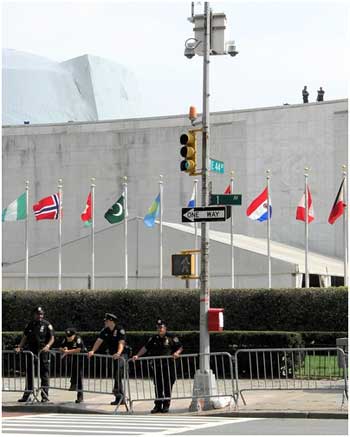 Patrick Freaney, Assistant Special Agent in Charge of the US Secret Service New York Field Office said: “When the Secret Service executes the security for an event as all-encompassing as the United Nations General Assembly, it requires the partnership of all law enforcement and public safety officials involved.”

And this year, there was a record number of world leaders addressing the 74th session of the General Assembly.

But the complaints by inconvenienced neighbors never ceased. The Wall Street Journal quoted a resident who had an answer to the annual pandemonium in the UN neighborhood: “Why can’t they take this to Governors Island. Put them on a little boat and send them back and forth”

In its 2016 United Nations Impact Report, the Mayor’s Office for International Affairs, in collaboration with the New York City Economic Development Corporation, outlined the economic costs and benefits to New York City, based on data from 2014, due to the presence of the permanent headquarters of the United Nations and UN Community.

The study presented the significant economic benefits from hosting the UN and UN Community in New York City and showcases how New York City supports this global community in its diverse metropolis.

About 16,000 people representing the UN community went to work every day in the city. Their household spending, as well as operating expenditures, helped to create increased economic opportunities for all New Yorkers by sustaining local jobs and supporting local business.

Among its findings, the UN Economic Impact Report 2016 shows that:

• The UN generates $3.69 billion in total economic output to City of New York’s economy.
• The 15, 890 individuals directly employed by the UN Community took home household earnings of approximately $1.64 billion. These household earnings and the operating expenses of the UN Community help to create and sustain 7,940 jobs for New Yorkers.
o The UN issued over 30,000 accreditations for visitors attending meetings and conferences. These visitors, on average, stayed in New York City for 14 days and received an average daily expense allowance of $258. This spend supported an additional estimated 1,210 jobs in NYC.
• New York City incurs costs supporting the UN Community, estimated to be approximately $54 million, including costs for security and education costs for staff members enrolling their children in public schools. However, even after taking account of these costs, the UN Community contributed approximately $56 million in net fiscal benefits to the City.

New York City Mayor Bill de Blasio said “With one out of three New Yorkers foreign-born, and over 200 languages spoken in our homes and on our streets, we are honored to host the United Nations Headquarters and the largest diplomatic corps in the world, who play an important role in serving New York’s vibrant and diverse communities.”