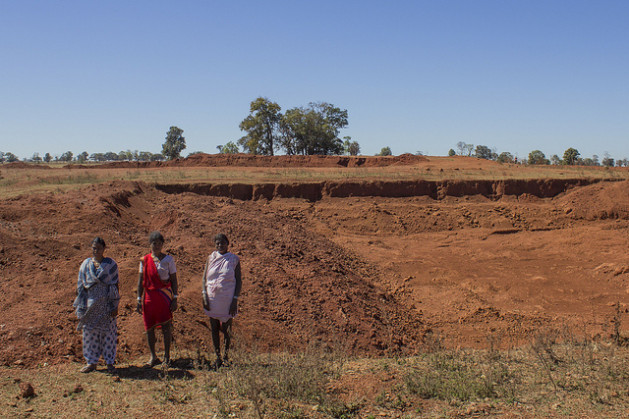 Three Adivasi women stand next to Kawardah mine in Chhattisgarh where Vedanta Aluminium Ltd is expected to receive bauxite supplies from the Bharat Aluminium Company. Credit: Nella Turkki/IPS

NEW DELHI, Oct 23 2013 (IPS) - A nationwide enquiry into illegal mining in India was aborted before it completed its investigation into the failings of the country’s mining industry. The study had prompted the government to ban mining in two states and arrest high-ranking politicians.

The government’s Oct. 16 decision to terminate the enquiry is a worrying indicator of its commitment to ending corruption and malpractice in the mining sector, says Vijay Pratap, convener of the think tank South Asian Dialogues on Ecological Democracy.

“Our government has been overwhelmed by the corporate power of mining companies. The government had to stop this enquiry because too many uncomfortable truths were being revealed about the nexus between politics and companies,” he told IPS.

The commission, headed by Justice M B Shah, was appointed in November 2010 to investigate illegal iron ore and manganese mining practices and track the financial records of transactions in the mining industry between 2006 and 2010.

Two earlier reports by the Shah Commission on illegal mining across the country led to a ban on the country’s largest iron ore mines in the states of Karnataka and Goa.

The government’s decision to end the enquiry will halt detailed hearings in three of the states listed in the commission’s terms of reference – Chhattisgarh, Maharashtra and Madhya Pradesh.

UV Singh, a member of the Shah Commission, told IPS that the government gave no justification for its decision to end the investigation before it could conclude its study.

“There is no reason. The investigation was incomplete. Major details were missing from our study, while in three states we were unable to commence any enquiry. Justice Shah is not satisfied with this outcome,” he told IPS.

According to the report on Goa’s iron ore mining sector, 90 mines had been operational without the requisite permission from the National Board for Wildlife. In September 2010 the government declared a temporary ban on all mining activity in Goa, which is still in place, and revoked all mining licences in response to a report by the commission. The small western state of Goa accounts for more than half of India’s iron ore exports.

The commission’s latest report described the state’s failings to regulate the industry as “a deliberate omission that resulted in illegal mining and a huge loss to the exchequer.”

The commission has estimated that illegal mining in Goa has cost the state financial losses of up to six billion dollars.

High-ranking government officials flagged by the commission for their involvement in bogus mining practices include Goa’s former director of mines and geology, Arvind Lolienkar, who was suspended for his alleged involvement in illegal mining.

M E Shivalinga Murthy, former director of Karnataka’s mines and geology department, was also charged, in May 2012, for illegally issuing transferred mining permits to the Associated Mining Company (AMC). A subsequent investigation found six other officials from his department guilty of collusion.

AMC is owned by former Karnataka tourism minister Janardhana Reddy, who has been imprisoned for using fake permits.

The enquiry’s findings set a precedent for the Supreme Court to ban mining in Karnataka from July 2011 to April 2013. The ban was lifted as the investigation in the state had concluded and there was strong pressure to allow mining industry activity to resume.

“Our system and its governing elite are controlled by large corporations who use bribery and intimidation to get what they want,” Pratap told IPS.

India’s iron ore exports have been in constant decline since 2009-2010, when exports stood at 117 million tonnes. In 2010-2011 exports had slumped to 61 million tonnes. According to the Federation of Indian Mineral Industries, the ban on mining in Goa and Karnataka has cost the country 10 billion dollars.

The closure of the commission will prevent further evidence being compiled on illegal mining and will also perpetuate “the illegal violation of resource rights and forest and environmental laws by mining companies in the tribal dominated mineral rich and forested districts of the state,” Madhu Sarin, honorary fellow at the Rights and Resources Initiative, a global coalition that works to encourage forest tenure and policy reforms, told IPS.

She told IPS that access to resources such as land and clean water will continue to be threatened by encroachment from illegal mining companies.

“Adivasis who live in areas with mining operations are the poorest by all measures, including access to electricity and drinking water,” Agarwal said.

“Their farm and forest land is taken by illegal means with particularly blatant violations of PESA (Panchayat Extension to Scheduled Areas Act) and the Forest Rights Act…then due to mining activities their ground water dries up and whatever remaining land of theirs gets destroyed by surface water effluents from the mines.”

Adivasis had their land rights curtailed earlier this year when the government overturned a key provision of the Forest Rights Act legislation to allow major linear infrastructure projects such as road building in forest habitat without consent from the affected community as previously mandated in the FRA.

In response to the decision to terminate the Shah Commission, Sanjay Basu Mallick from the All India Forum of Forest Movements told IPS: “Adivasis can no longer rely on legal process to protect their rights. Their only weapons are courage and non-violent protest.”