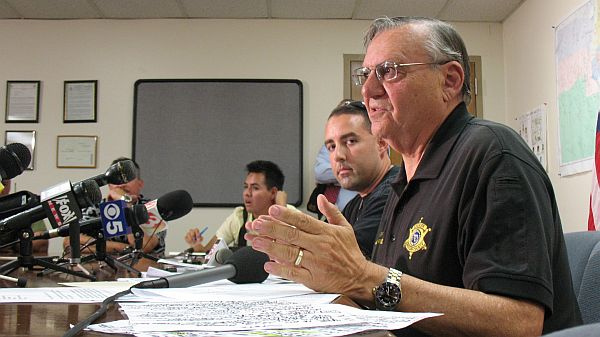 Maricopa County, Arizona Sheriff Joe Arpaio used chain gangs and a "tent city" in his crusade against undocumented immigrants in the state. He has been sued more than 2,000 times and is now is overseen by a federal monitor. Credit:Valeria Fernandez/IPS

WASHINGTON, Oct 29 2013 (IPS) - Saul Merlos is an undocumented migrant from El Salvador. About two years ago, he was living and working in the southern U.S. city of New Orleans.

“One day, our employers told us we were going to get paid, but instead they sent immigration,” he told IPS. “I was a witness to the raid, where they got 55 of us.”

"People are disappearing on their way to drop their children off to school." -- Jennifer Rosenbaum of the New Orleans Workers’ Center for Racial Justice

Merlos said the raid was violent. “I was a witness that there was a pregnant woman with her daughter, but they didn’t care,” he said. “They yelled at her, and at all of us, that this was their country and asked us what we were doing in their country. They hit some of us, and didn’t even allow me to use the restroom.”

Speaking to IPS on the sidelines of a hearing at the Inter-American Commission on Human Rights (IACHR) Monday, Merlos added that the immigration officers did not read the workers their rights or inform them of what to expect from the detention process.

As momentum builds for U.S. immigration reform after months of political deadlock, a group of NGOs and immigration lawyers are warning that the U.S. system is currently leading to widespread violations of immigrants’ human rights.

The accusations come as the IACHR, the region’s pre-eminent rights forum, began an investigation into the issue on Monday. At that hearing, held at the 35-member Organisation of American States (OAS) headquarters in Washington, advocates questioned the rights standards used by U.S. Immigration and Customs Enforcement officers (ICE).

According to the witnesses, ICE officers may have violated immigrants’ basic human rights by indefinitely separating them from their U.S. citizen children, in addition to having detained them without appropriate constitutional protections.

At Monday’s hearing, multiple advocacy groups alleged that ICE detention practices have failed to account for the human rights of parties involved when officers use what is known as their prosecutorial discretion. This refers to a federal agency’s authority, in immigration cases, to decide whether to begin removal proceedings against undocumented migrants.

Saul Merlos has been in the United States for 18 years, and has a 13-year old daughter who is a U.S. citizen. A favourable exercise of prosecutorial discretion would avoid him being deported Dec. 17, 2013.

“All we want is for the U.S. government to stop this because they are separating our families,” Merlos said.

The place of human rights in immigration proceedings has emerged as a key point of discussion in recent months in situations in which the children are U.S. citizens but at least one of the parents is deported because of their illegal status. Most of the time, this means that families are separated for indefinite amounts of time.

“We need to realise the serious concerns raised by the way people are being arrested and the way the U.S. government is pursuing these prosecutions.” Jennifer Rosenbaum, the legal director at the New Orleans Workers’ Center for Racial Justice (NOWCRJ), an advocacy group, told IPS.

NOWCRJ and several other groups are calling on U.S. ICE officers to consider rights norms when detaining illegal immigrants or considering initiating removal proceedings against them. According to data presented before the IACHR this week, U.S. immigration agencies have largely failed to use their prosecutorial discretion, choosing instead to deport thousands of illegal immigrants with no regard to their family ties.

Yet others raise separate concerns about the possible implications of more lenient behaviour on the part of ICE.

“We should remember that the government isn’t actually separating families, as the parent is choosing to leave his or her child behind,” Jon Feere, a legal policy analyst at the Centre for Immigration Studies (CIS), a non-profit organisation here, told IPS.

“Moreover, it probably shouldn’t be standard U.S. policy that people can’t be deported if they have children, because there’s the question of where exactly you’re going to draw the line. If the parent has engaged in criminal activity such as identity theft, or has broken serious laws, are we saying that the American victim is not going to receive any restitution just because that immigrant has a child?”

Rights advocates, on the other hand, suggest that in the majority of related cases, immigrants are stopped and detained unconstitutionally in the first place.

“In New Orleans and other communities across the country, people are disappearing on their way to drop their children off to school,” NOWCRJ’s Rosenbaum said. “Their apprehensions involve the inappropriate use of force and no due process protections. What is even more worrying is that most of them are the victims of outright racial profiling.”

In 2012, as many as 150,000 U.S. citizen children saw at least one of their parents get deported, according to information presented Monday at the IACHR.

The U.S. delegation to the OAS was not able to respond to the panel’s allegations.

“Unfortunately, the federal government shutdown prevented us from properly preparing for today’s hearings, as officers were not able to collect any evidence and witnesses,” Lawrence J. Gumbiner, the deputy U.S. permanent representative at the U.S. mission to the OAS said. Gumbiner later declined to comment further on the human rights implications of the allegations.

The hearing comes at a critical time, as Congress recently resumed its work on a proposal that would massively overhaul the United States’ sprawling immigration system. As the House of Representatives looks more closely at the comprehensive Border Security, Economic Opportunity, and Immigration Modernisation Act approved by the Senate last June, President Obama urged all in Washington to come together and fix the country’s “broken immigration system”.

House Republicans oppose comprehensive immigration reform, which they worry would force them to accept some provisions that they dislike, particularly a contentious “path to citizenship” for the estimated 11 million illegal immigrants currently living in the United States. Instead, House conservatives have broken apart the many issues in play in the reform push and started passing piecemeal legislation.

“One of the major concerns is that yet another comprehensive immigration bill will only bring more illegal immigration in the country,” CIS’s Feere told IPS. “Right now, many Americans simply do not trust the president to actually go through with the bill’s enforcement provisions.”