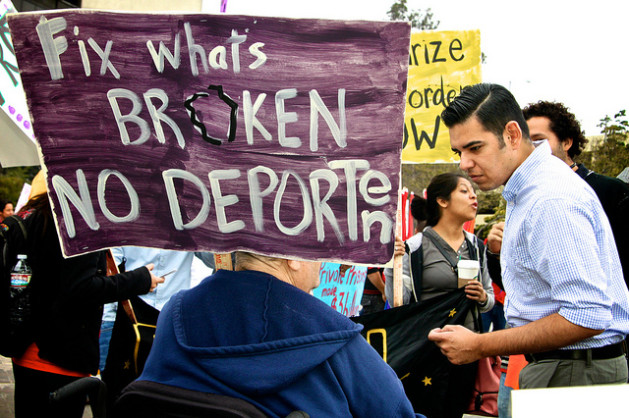 WASHINGTON, Apr 18 2013 (IPS) - A long-awaited legislative proposal to reform the United States’ immigration system is sparking frustration on both the left and right here, but is widely being seen as a centrist compromise bill that will now energise all sides as debate in Congress begins Friday.

The massive overhaul plan, released Wednesday by a bipartisan group of eight senators, offers nearly 900 pages of changes. If it passes what is sure to be contentious negotiations over the coming months, any final legislation would be the first major immigration reforms in the United States since the 1980s.

“A change like this would set up a comparison between a scientist and a sister, and that’s a big concern.” -- Center for Community Change's Kica Matos

Yet nestled among the new proposal is a fundamental realignment of U.S. visa policy away from a longstanding priority on family reunification and towards, instead, a model that more closely fulfils the needs of business.

Indeed, the proposal would stop offering siblings or adult children of U.S. citizens the chance to apply for family visas, though it does ease travel to the United States by other relatives. For decades, Washington has made available some 65,000 family-related visas every year, an ideological cornerstone of its immigration programme.

Under the proposed changes, on the other hand, visas for agricultural workers and high-skilled workers would be greatly increased, a key concession to the business community.

“This draft clearly damages the family-based immigration system and the longstanding principle of family unity,” Kica Matos, the director of Immigrant Rights and Racial Justice at the Center for Community Change, a Washington advocacy group, told IPS.

“A change like this would set up a comparison between a scientist and a sister, and that’s a big concern.”

In addition to immigration rights proponents, the AFL-CIO, one of the country’s largest unions and a kingmaker in the current debate, has come out strongly against the family visa changes.

In addition, the diversity visa programme – historically one of the most popular ways of emigrating to the United States, offering around 55,000 visas through an annual lottery system – is being replaced with twice as many “merit-based” visas. Eventually, this programme is aimed at rising to around 250,000 visas per year.

Some analysts suggest that such changes could have a significant effect on the demographic impact of the U.S. immigration system, perhaps greatly increasing the number of Asian immigrants into the country to the detriment of others.

“The diversity visa was historically of particular importance for people of colour, especially those from Africa,” Matos says.

“The switch away from family visas and the elimination of the diversity visa is a step in the wrong direction, introducing a far more mercantile approach. Doing so leaves these important decisions up to big corporations, rather than preserving longstanding U.S. commitments to immigration and keeping intact family unity.”

Matos is quick to note, however, that the new proposal still constitutes a “historic step towards humane policy reform”, including reforms that advocates have been emphasising for nearly two decades.

Despite widely differing approaches, the United States’ immigration system has long been seen by all sides as “broken”, due in part to its complexity, cost and contradictory aims.

Yet particularly following the recent national elections, in which the growing Hispanic community largely turned against Republicans, a broad coalition of business, labour, law enforcement and religious communities is viewing 2013 as the year that comprehensive reforms could be possible.

And they’re almost unanimous in stating that the current bill is a strong starting point.

“On the whole, we think this is a good bill, and does a really good job of including all core elements you need for a reform bill like this,” Mark Falzone, the deputy director of the National Immigration Forum, an advocacy group, told IPS.

“People on the right and left are going to be critical of certain aspects of this proposal, but that’s the nature of compromise. We haven’t had meaningful immigration reform in this country in recent memory, but this time is clearly different, with both Democrats and Republics pushing hard.”

Still, one of the most contentious issues remains the presence in the United States of around 11 million undocumented immigrants. These migrants tend to be seen as critical labour by the business community, as lawbreakers by conservatives, and as victims of an inhumane system by liberals.

Thus, the centrepiece of the new bill includes a highly controversial route to citizenship for the undocumented. The plan would normalise their status after they pay fees and taxes, and pass a criminal background check and other requirements, and allow them to progress towards citizenship.

This has been a baseline demand by liberals, but the proposition is already leading to the most explosive responses from conservatives worried about “rewarding” lawbreakers. (In fact, Mexican migration into the United States has almost completely stopped in recent years, due to both demographic and economic changes in Mexico.)

At the same time, the new legislation would continue to step up security along the U.S.-Mexico border, presumably increasing fencing and personnel while potentially adding unmanned surveillance drones to the mix.

“We have included a lengthy path to citizenship … contingent on doing everything possible to make the borders secure,” Senator John McCain, one of the architects of the new bill and a Republican who in the past has faced stiff resistance for deal-making on immigration, told reporters Thursday.

“Republicans have got to compete for the Hispanic vote. Passage of this legislation wouldn’t gain a single vote from the Hispanic community but it would put us on a level where we could compete in the battle of ideas. Right now, we’re not competitive.”

Still, the new proposal would not make the citizenship programme effective immediately. Rather, as McCain notes, it would be conditional on the creation of a Department of Homeland Security (DHS) strategy to achieve a specified border security “effectiveness” rate.

If DHS were to be unable to do so within six months, the bill would require the creation of a commission led by border states.

Yet even if that strategy were to be deemed acceptable, those hoping to get “provisional” status en route to citizenship would end up waiting years to decades. Under the new proposal, the minimum wait time would be 13 years, which some immigration advocates are saying is unjustly long.

Further, a proposed cut-off date for eligibility for the “provisional” status is currently December 2011, barring those who arrived thereafter. Yet this would leave a few hundred thousand people who automatically wouldn’t qualify – putting them permanently in the position that the new legislation is trying to ameliorate once and for all.