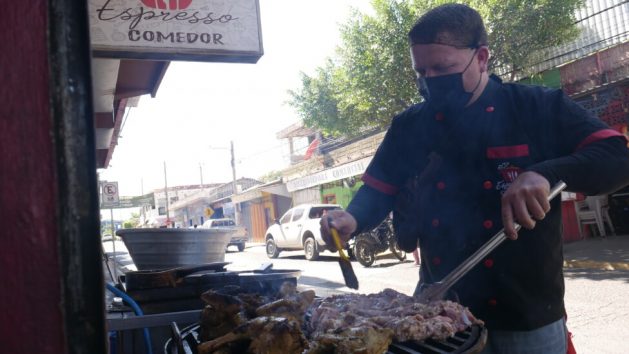 Oscar Sosa cooks roast chicken and pork on an artisanal grill set up outside his small restaurant, Comedor Espresso, in the eastern Salvadoran city of San Francisco Gotera. Like many of the returnees, especially from the United States, he set up his own business, given the unemployment he found on his return to El Salvador. More than 10,000 people were deported to this Central American country between January and August 2022. CREDIT: Edgardo Ayala/IPS

SAN FRANCISCO GOTERA, El Salvador, Jan 10 2023 (IPS) - While grilling several portions of chicken and pork, Salvadoran cook Oscar Sosa said he was proud that through his own efforts he had managed to set up a small food business after he was deported back to El Salvador from the United States.

This has allowed him to generate an income in a country where unemployment affects 6.3 percent of the economically active population.

“Little by little we grew and now we also have catering services for events,” Sosa told IPS, as he turned the chicken and pork over with tongs on a small circular grill.

The grill is located outside the premises, so that the smoke won’t bother the customers eating inside.

It’s not easy, he said, to return home and to not be able to find a job. That is why he decided to start his own business, Comedor Espresso, in the center of San Francisco Gotera, a city in the department of Morazán in eastern El Salvador.

“You come back wanting to work and there aren’t any opportunities. The first thing they see in you is your age; when you’re over 35, they don’t hire you.” -- Patricia López

Sosa’s, although very small, was clean and tidy, and even had air conditioning, when IPS visited it on Dec. 19.

Skills and capacity abound, but opportunities are scarce

Sosa, 35, is one of thousands of people deported from the United States every year.

He left in 2005 and was sent back in 2014. He worked for eight years as a cook at a Mexican restaurant in the city of Pensacola, in the southeastern state of Florida.

A total of 10,399 people were deported to this country between January and August 2022, which represents an increase of 221 percent compared to the same period in 2021, according to figures from the International Organization for Migration.

The flow of undocumented Salvadoran migrants, especially to the United States, intensified in the 1980s, due to the 1980-1992 civil war in El Salvador that left some 75,000 dead and around 8,000 forcibly disappeared.

At the end of the war, people continued to leave, for economic reasons and also because of the high levels of violent crime in the country.

Despite the problem of unemployment, Sosa was not discouraged when he returned to his country.

Obviously, not all deportees have the support, especially financial, needed to set up their own business.

The stigma of deportation weighs heavily on them: there is a widespread perception that if they were deported it is because they were involved in some type of crime in the United States.

A government survey, conducted between November 2020 and June 2021, found that 50 percent of the deportees manage to open a business, 18 percent live off their savings, their partner’s income or support from their family, and 16 percent have part-time or full-time jobs.

In addition, seven percent live on remittances sent home to them, two percent receive income from property rentals, dividends or bank interests, and seven percent checked “other” or did not answer.

Apart from some government initiatives and non-governmental organizations that provide training and funds for start-ups, returnees have faced the specter of unemployment for decades.

Many return empty-handed and owe debts to the people smugglers who they hired to get into the United States as undocumented migrants.

In the case of Sosa, his brothers supported him to set up Comedor Espresso.

He also received a small grant of 700 dollars to purchase kitchen equipment.

The initiative, launched in 2019, aims to generate opportunities for returnees in four municipalities in eastern El Salvador, including San Francisco Gotera.

This region was chosen because most of the deportees reside here, according to Carlos Díaz, coordinator of the program on behalf of the San Francisco Gotera mayor’s office.

But the demand for support and resources exceeds supply.

“There was a database of approximately 350 returnees in Gotera, but there was only money for 55,” Díaz told IPS.

More than 200 people benefited in the four municipalities. 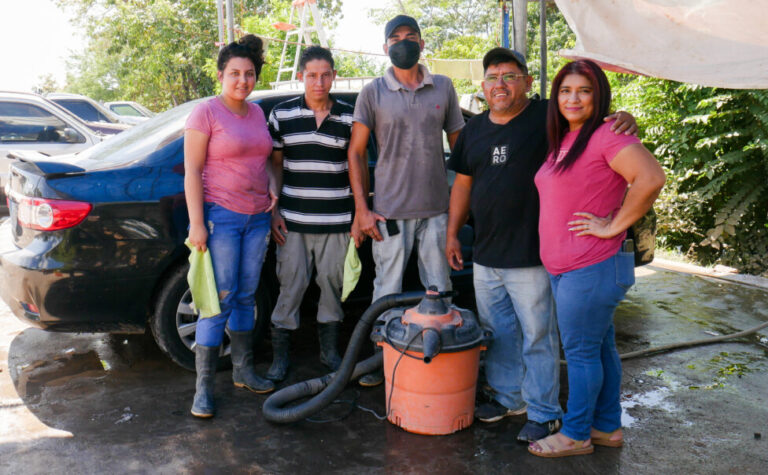 David Aguilar and Patricia López (right) set up their own business, El Tuco King Carwash, after they decided to return to El Salvador. Their business is located in the eastern part of the country, a region where more than 50 percent of returnees live. CREDIT: Edgardo Ayala/IPS

Hope despite a tough situation

Out of necessity, David Aguilar and Patricia López, 52 and 42, respectively, also set up their own business, in their case a car wash, after deciding to return to El Salvador. It’s called Tuco King Carwash.

Like Sosa, they are from San Francisco Gotera. Aguilar left the country in November 2005 and López three months later, in February 2006.

They made the risky journey to try to give their young daughter – six months old at the time, and today 17 years old – a better future.

One leg of the trip was by sea, on the Pacific Ocean off the coast of Mexico.

“I spent 12 hours at sea, in a boat carrying about 20 people, who were all undocumented like me,” Aguilar said.

He added: “The only thing they gave us as lifesavers were a few plastic containers, in case the boat capsized.”

It was in Houston, in the state of Texas, that Aguilar found work in a car paint shop. The experience has been useful to him back in El Salvador, because in addition to washing cars, he offers paint jobs and other related services.

Aguilar and López were not deported; they decided to return because her father died in 2011. They came back in 2012, without having seen many of their dreams come true.

“You come back wanting to work and there aren’t any opportunities. The first thing they see in you is your age; when you’re over 35, they don’t hire you,” López said.

Before embarking on the trip to the United States, she had finished her degree as a primary school teacher, in 2005. But she never worked as a teacher because she left the following year.

“When I returned I applied to various teaching positions, but no one ever hired me,” she said.

Today, their carwash business, set up in 2014, is doing well, albeit with difficulties, because the couple have found that there is too much competition.

But they do not lose hope that they will succeed. 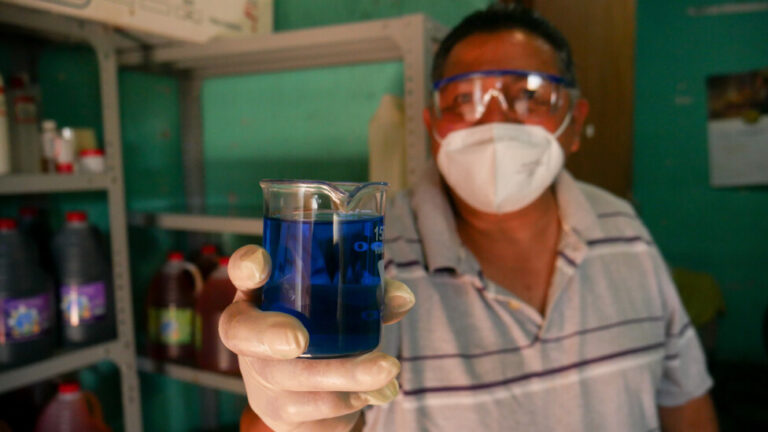 Former Salvadoran guerrilla David Henríquez, deported from the United States in 2019, shows the quality of the disinfectant he has just produced in his small artisanal workshop in San Salvador. With no chance of finding formal employment after deportation, he worked hard to set up his disinfectant business to generate an income. CREDIT: Edgardo Ayala/IPS

David Henríquez, a 62-year-old former guerrilla fighter, was deported in 2019.

During the civil war, Henríquez was a combatant of the then insurgent Farabundo Martí National Liberation Front (FMLN), but when peace came he decided to emigrate to the United States in 2003 as an undocumented immigrant.

With no hope of finding a formal sector job here, he began to make cleaning products, a skill he learned in the United States.

In the 12 years that he lived there, he worked for two years at the Sherwin Williams plant, a global manufacturer of paints and other chemicals.

“It was there that I began to discover the world of chemical compositions and aromas,” Henríquez told IPS during a visit to his small workshop in the Belén neighborhood of San Salvador, the capital.

Henríquez was producing a 14-gallon (53-liter) batch of blue disinfectant with the scent of baby powder. He also makes disinfectant smelling like cinnamon and lavender, among others. His business is called El Dave de los aromas.

His production process is still artisanal, although he would know how to produce disinfectant with high-tech machinery, if he had it, he said, “as I did at Sherwin Williams.”

He used a baby bottle to measure out the 3.5 ounces (104 milliliters) of nonylphenol, the main chemical component, used to produce 14 gallons.

Henríquez dissolved other chemicals in powder, to get the color and the aroma, and the product was ready.

“The important thing is to have discipline, work hard, to shine with your own effort,” he said.