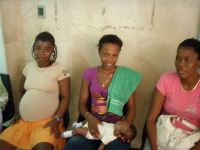 One of three public maternity hospitals in the capital, with 270 beds, 300 attending physicians and 100 residents, it is the best-equipped in the country and the birthplace of over 12 percent of all babies born in the Dominican Republic. It receives referrals of mothers at risk from all regional hospitals.

The Department of Public Health reports that of the 36,606 babies born in the country during the first half of this year, 16 percent were born to Haitian mothers. The catastrophic earthquake that devastated Haiti’s infrastructure in January has not only driven expectant mothers across the border, but doctors say many of those births are riskier due to trauma and a lack of prenatal care.

Charlyn Misdave, holding her baby of a month old, speaks only Kreyole, like many of the Haitian women who come here. This presents a grave problem for the doctors at the hospital.

“I lost everything,” she told IPS. “That is why I came here after the earthquake. My baby is a month old. I paid 500 pesos ($13) for the delivery. I can bring him in for check- ups but they do not give me any medicine or any supplies for him.”

The Dominican Republic usually spends the equivalent of $10 million a year on health services for Haitians here, the bulk of it on maternity care. This year, the department estimates that the health services delivered to Haitians will be closer to $27 million.

Dressed in a crisp white coat, Dr. Veronica de la Rosa, assistant director of the hospital, told IPS, “We ask for a token payment of 700 pesos ($19) for a normal delivery and 1,000 pesos ($27) for a caesarian birth. If it is a normal delivery, a woman stays here a day or less. But if there are complications, it can be five days or more.”

“Since the earthquake, we have more mothers who are staying longer since they are coming with pathologies,” she said. “This is using up a larger portion of our budget since we generally have to use our social services budget for these patients as they come with nothing.”

Just under a third of the hospital’s beds are occupied by Haitian mothers, she said.

“With these patients, we are also managing cases with a much higher degree of risk. Here [in the Dominican Republic] we have prenatal care and some control over the poorest sectors of our population. We do not have this control over foreigners as they come over here directly,” De la Rosa explained.

Of every six patients in intensive care, four of them are Haitian, she said.

“From 32 to 37 percent of our births here are delivered by Caesarian,” De la Rosa added. “This depends on the number of patients who are HIV-positive. For these women, caesarians are used to prevent the vertical transmission of the virus [to the infant] during birth.”

While many of the Haitian mothers are long-time residents of the Dominican Republic, others cross the border specifically to give birth and are referred here from regional hospitals in the border areas of Elias Pina, Bani and Barahona. Cases from the northern border region are referred to hospitals in Santiago.

“We can tell the difference between Haitians who live here in the country and those who come directly over the border as residents usually have an address and a better command of Spanish. Also they usually come with a family member,” De la Rosa said.

Upstairs, in the recovery rooms of 20 beds each, Haitian and Dominican mothers lie in neighbouring beds with their newborns. Some have intravenous drips attached to their arms. Teams of residents sweep through each ward, filling out charts and instructing medical students.

The only difference between the mothers is the colour of the birth registration document that is sent to the Dominican government. Several years ago, the Dominican Republic introduced a separate birth registry for children of foreigners and for those who are considered to be here “in transit”, which includes the majority of Haitians.

Dr. De La Rosa explained the process. “All births are registered with the Junta Electoral of the Dominican government. Foreigners who give birth here are registered in a special book, called the Libra Rosada. The mothers are given a copy of these papers, but it is up to them to go there and register their babies with their own governments to get their proper papers.”

“This book is for all foreigners, not just Haitians, but it is true that about 98 percent of the foreigners who give birth here are Haitians,” she noted.

Citizenship rights, particularly for Haitian migrants, have been the subject of ongoing international controversy. The new constitution approved a year ago maintained the wording barring automatic citizenship for those born here of parents of foreign diplomats or “in transit”, and added the words “or those who are in this country illegally”.

However, it did extend citizenship to those born here who do not have the rights of citizenship in any other nation, clearing up a matter of statelessness for many grandchildren of Haitians. Under the Haitian constitution, one may only claim citizenship if one’s parents are born in Haiti.

The Dominican Republic is no longer giving direct assistance to Haiti, but Deputy Rafaela Albuquerque, a former Speaker of the Chamber of Deputies, says that public health expenditures have become a form of de facto aid to the stricken neighbour.

“We do not actually have a budget line for helping Haiti. There was discretionary spending for the disaster which President Leonel Fernandez requested and the Congress approved,” she said. “Our president speaks of Haiti in all his international encounters, particularly in front of the U.N. He recently spoke there of the rains and how the people are living in tents and are suffering greatly.”

“Our general budget has a line item for public health which is distributed among all the public hospitals. This budget was not designed to aid any other country,” she said. “It is a form of humanitarian aid that the Dominican Republic helps Haiti in this way. The Dominican Republic has never asked for reimbursement for this money.”