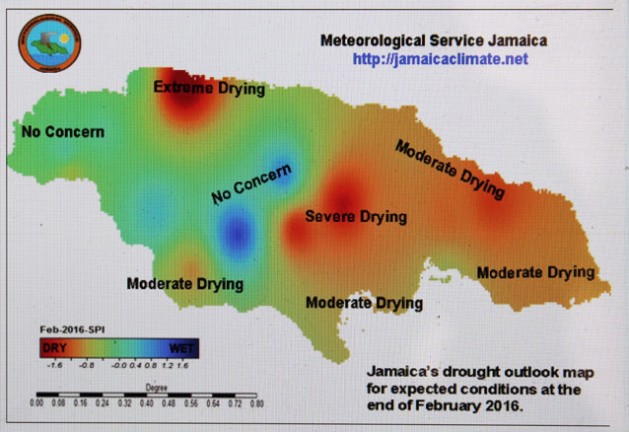 KINGSTON, Jamaica, Jan 13 2016 (IPS) - On a very dry November 2013, Jamaica’s Meteorological Service made its first official drought forecast when the newly developed Climate Predictability Tool (CPT) was used to predict a high probability of below average rainfall in the coming three months.

By February, the agency had officially declared a drought in the eastern and central parishes of the island based on the forecasts. July’s predictions indicated that drought conditions would continue until at least September.

Said to be the island’s worst in 30 years, the 2014 drought saw Jamaica’s eastern parishes averaging rainfall of between 2 and 12 per cent, well below normal levels. Agricultural data for the period shows that production fell by more than 30 per cent over 2013 and estimates are that losses due to crop failures and wild fires amounted to one billion dollars.

Jamaica’s agricultural sector accounts for roughly seven per cent of the island’s gross domestic product (GDP) and employs about 20 per cent of its workforce.

The Met Service’s, Glenroy Brown told IPS, “The CPT was the main tool used by our Minister (of Water, Land, Environment & Climate Change) Robert Pickersgill throughout 2015 to advise the nation on the status of drought across the island .”

It was also used but the National Water Commission (NWC) to guide its implementation of island-wide water restrictions.

A technician with Jamaica’s Met Service, Brown designed and implemented the tool in collaboration with Simon Mason, a climate scientist from Columbia University’s International Research Institute (IRI) for Climate and Society with funding from the United States Agency for International Development (USAID).

The innovation was one of the first steps in building resilience under Jamaica’s national climate policy. It provides drought-monitoring forecasts that allows farmers to plan their planting around dry periods and has been “tailored for producing seasonal climate forecasts from a general circulation model (GCM), or for producing forecasts using fields of sea-surface temperatures,” Brown said.

The tool combines a number of applications including Google Earth and localised GIS maps, to generate one to five day forecasts that are country and location specific. The information is broken down and further simplified by way of colour-coded information and text messages for the not so tech-savvy user.

The tool designed by Brown and Mason also incorporated IRI’s own CPT (designed by Mason) that was already being used by Caribbean countries with small meteorological services and limited resources, to produce their own up-to-date seasonal climate forecasts. The new tool combined data on recent rainfall and rainfall predictions to provide a forecast that focused specifically on drought.

“It was important for us to design a system that addressed Jamaica’s needs upfront, but that would also be suitable for the rest of the region,” Mason noted.

The scientists explained, “Because impact of a drought is based on the duration of the rainfall” and not only the amount of rainfall, looking forward is not enough to predict droughts because of factors related to accumulation and intensification.

“What we’re doing is essentially putting a standard three-month rainfall forecast in context with recent rainfall measurements,” Mason, told USAID’s publication Frontlines last May. He noted that if below-normal rainfall activity was recorded during an unusually dry period, indications were there was a “fairly serious drought” ahead.

Sheldon Scott from Jamaica’s Rural Agricultural Development Authority (RADA) told IPS that farmers who used the SMS information were able to avoid the worse effects of the drought.

“The impacts were visible in relation to farmers who used the information and others who didn’t, because those who did were able to manage the mitigating factors more effectively,” he said.

During the period, more than 500 farmers received text alerts and about 700,000 bulletins were sent to agricultural extension officers.

Among the farmers who signed up for text messaging service, Melonie Risden told Frontlines, “The information we received from the Met office gave us drought forecasts in terms of probabilities. We still decided to plant because we were fortunate to have access to the river and could fill up water drums ahead of time in anticipation of the drought.”

Risden lost the corn she planted on the 13-acre property in Crooked River, Clarendon, one of the parishes hardest hit by the drought with only two per cent of normal rainfall, but was able to save much of the peas, beans and hot peppers.

Six months after Jamaica’s Met Service made its ground-breaking forecast, the CIMH presented the first region-wide drought outlook at the Caribbean Regional Climate Outlook Forum in Kingston. Now 23 other Caribbean and Central American countries are using the tool to encourage climate change resilience and inform decision-making.

“Regionally the tool is now a standard fixture across several countries within the region, including the Dominican Republic, Cuba and Haiti. This regional effort is coordinated by the CIMH,” Brown said.

Back in Jamaica, the tool is being hailed “a game-changer” in the climate fight by Jeffery Spooner head of the Met Service, who described the CPT as “an extremely important tool in Climate Change forecasting and specifically for the agricultural – including fisheries- and water sectors for rainfall projection .”

The CPT is now also used to provide regular monthly bulletins that are published by the Meteorological Service on their web site www.jamaicaclimate.net. RADA has also continued to use the CPT in its extension service, to enhance the ability of farmers’ and other agricultural interests to improve water harvesting, planting and other activities.

Since most of the island’s small farms depend on rainfall, more farmers – including those with large holdings – are using the information to better manage water use and guide their activities, Scott said.

Local and intentional scientists have linked the extreme atmospheric conditions related to the droughts affecting Jamaica and the region to the persistent high-pressure systems that has prevented the formation of tropical cyclones to global warming and climate change.

Across the agricultural sector, Jamaica continues to feel the impacts of drought and the challenges are expected to increase with the climate change. In a 2013 agricultural sector support analysis, the Inter-American Development Bank estimated, low impact on extreme climate events on Jamaica’s agriculture sector by 2025 could reach 3.4 per cent of “baseline GDP” annually.

In fact, the Intergovernmental Panel on Climate Change Synthesis Report (AR5) pointed to tools like the CPT to mitigate the impacts of climate change. Its importance to Jamaica’s and the region’s food security and water sector cannot be overlooked.

In addition to adaptation for the water sector, the CPT is being modified to provide early warning indicators for wind speeds and coral bleaching among among other applications, said the report.

And as showers of blessings cooled the land and brought much relief in the closing months of the year, CPT shows the drought could well be over.