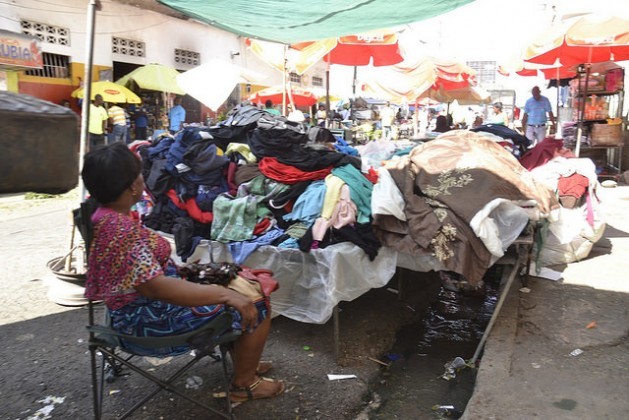 Leaks in city water pipes, like this one in the Pequeño Haití (Little Haiti) market in Santo Domingo, aggravated the water shortages during the lengthy drought in the Dominican Republic. Credit: Dionny Matos/IPS

But the most severe December-April dry season in the last 20 years helped convince the authorities to listen to the local scientific community in this Caribbean nation that shares the island of Hispaniola with Haiti.

“The National Meteorology Office (ONAMET) actually benefited because the authorities and key sectors like agriculture and water paid more attention to us,” said Juana Sille, an expert on drought, which was a major problem in the Caribbean and Central America in 2015.

The cause was the El Niño-Southern Oscillation (ENSO), a cyclical climate phenomenon that affects weather patterns around the world. Forecasts indicate that its effects will be felt until early spring 2016, and devastating impacts have already been seen in South American countries like Bolivia, Colombia and Peru.

As a result of this record El Niño and its extreme climatic events, the international humanitarian organisation Oxfam predicted in October that at least 10 million of the world’s poorest people would go hungry in 2015 and 2016 due to failing crops.

“The most severe droughts reported in the Dominican Republic are associated with the ENSO phenomenon,” Sille told IPS, based on ONAMET’s studies.

But the meteorologist said that unlike in past years, “there is now awareness among decision-makers about climate change and the tendency towards reduced rainfall.” 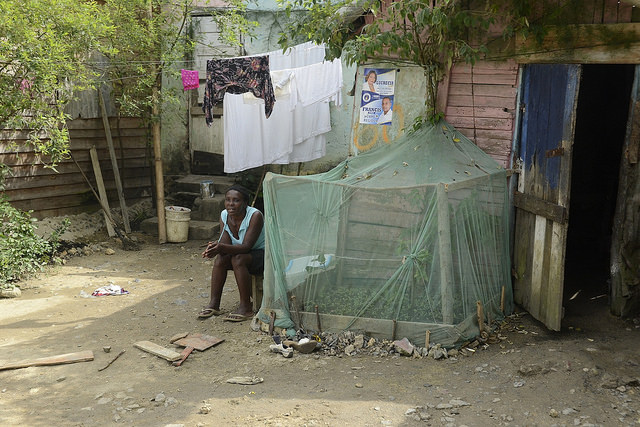 The gardens and fruit trees kept by many women in their yards to help feed their families, like this one in the rural settlement of Mata Mamón, were hit hard by drought in the Dominican Republic in 2015. Credit: Dionny Matos/IPS

“The authorities are learning to follow the early warning system and to implement prevention and adaptation plans,” she stated.

Sille pointed out that, in an unusual move, a government minister asked ONAMET in 2015 to carry out a study to assess the causes and likely duration of the drought that has been plaguing the country since 2014.

One quarter of the world’s population faces economic water shortage (when a population cannot afford to make use of an adequate water source).

Effects of drought in the Caribbean

• In Cuba, 45 percent of the national territory suffered rainfall shortages, in the most severe dry season in 115 years.
• In Jamaica, people found to be wasting water can be fined or even put into jail for up to 30 days.
• Barbados, Dominica and the Virgin Islands adopted water rationing measures in the residential sector.
• St. Lucia declared a national emergency after several months of water shortages.
• Puerto Rico suffered serious shortages due to poor maintenance of reservoirs.
• Antigua and Barbuda depended on wells and desalination plants to alleviate water shortages.
• In Central America, more than 3.5 million people have been affected by drought.

This is true mainly in the developing South, where the local scientific communities have a hard time raising awareness regarding the management of drought, whose impacts are less obvious than the damage caused by hurricanes and earthquakes.

Experts in the Dominican Republic and other developing countries call for the creation of risk management plans to ward off the consequences of water scarcity crises.

“We have a National Plan Against Desertification and Drought, but some institutions apply it while others don’t,” lamented the meteorologist. “This drought demonstrated the urgent need for everyone to implement the programme, which we have been working on for a long time.”

The Dominican Republic’s 10 reservoirs, located in six of the country’s 31 provinces, are insufficient, according to experts. Another one will be created when the Monte Grande dam is completed in the southern province of Barahona.

Along with rivers and other sources, the reservoirs must meet the demands of the country’s 9.3 million people and the local economy, where tourism plays a key role.

Water from the reservoirs is used first for household consumption, then irrigation of crops in the reservoir’s area of influence and the generation of electric power. But every sector was affected by water scarcity in 2015.

“The dry season was really bad. The worst of all, because it killed the crops,” Luisa Echeverry, a 48-year-old homemaker, told IPS. Her backyard garden in the rural settlement of Mata Mamón, in the municipality of Santo Domingo Norte, to the north of the capital, helps feed her family.

But her garden, where she grows beans and corn, as well as peppers and other vegetables, to complement the diet of her three children, was hit hard by the scant rainfall.

“When things were toughest, we would try to manage using our water tank, which we sometimes even used to provide our neighbours with water,” said Echeverry.

“Our concern was for the crops, in our houses we always had water,” said Ocrida de la Rosa, another woman from this rural town of small farmers in the province of Santo Domingo, where many women keep gardens and fruit trees to help feed their families.

All but two of the country’s reservoirs were operating at minimum capacity, which meant the authorities had to give priority to residential users over agriculture and power generation.

Yields went down, and many crops were lost, especially in rice paddies, which require huge quantities of water. Production in the rice-growing region in the northwest of the country fell 80 percent due to the scarce rainfall and the reduced flow in the Yaque del Norte River.

And the Dominican Agribusiness Council reported a 25 to 30 percent drop in dairy production due to the drought, while hundreds of heads of beef cattle died in the south of the country.

Production in the hydropower dams fell 60 percent, in a country where hydroelectricity accounts for 13 percent of the renewable energy supply.

The daily water supply in Greater Santo Domingo went down by 25 percent, and thousands of people in hundreds of neighbourhoods, and in the interior of the country, suffered water rationing measures. Some neighbourhoods depended on tanker trucks for water.

And in the face of rationing measures, residents of Greater Santo Domingo protested the wasteful use of water in less essential activities, as well as the many unrepaired leaks in the residential sector.

The authorities closed down local car wash businesses, which abound in the city, and people could be fined or even arrested for wasting water to wash cars, clean sidewalks and water gardens.