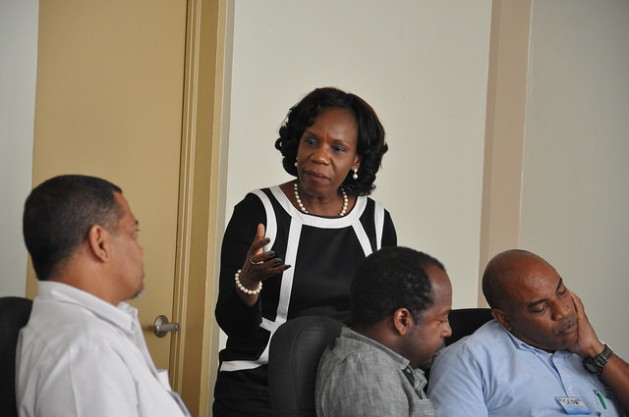 "All governments must work together within the region and lessons learnt in one country can be translated to other countries." -- Dr. Paulette Bynoe

“We have been making progress…making professionals and other important stakeholders aware of the issue. That is the first step,” she told IPS.

“So in other sectors we can also look at coordination whether we talk about agriculture or tourism. It’s important that we think outside of the box and we stop having turfs and really work together,” she added.

Earlier this month, Bynoe facilitated a three-day workshop on Hydro-Climatic Disasters in Integrated Water Resource Management (IWRM) in St. Lucia. The workshop was held as part of the Organisation of Eastern Caribbean States-Reducing the Risks to Human and Natural Assets Resulting from Climate Change (OECS-RRACC) project.

Participants were exposed to the key principles of IWRM and Disaster Risk Reduction (DRR); the implications of climate change and variability for water resources management; policy legislation and institutional requirements needed at the community level to facilitate DRR in IWRM; the economics of disasters; and emergency response issues.

Rupert Lay, a water resources specialist with the RRACC Project, said the training is consistent with the overall goals of the climate change demonstration project in GIS technology currently being implemented by the OECS Secretariat.

“What we need to do now in the region and even further afield is to directly correlate the effects, the financial impacts of these adverse weather conditions as it relates to water resources,” he told IPS.

“We need to make that link strongly so that all of us can appreciate the extent to which and the importance of building resilience and adapting to these stresses.”

On Jul. 9, the St. Lucia Water and Sewage Company (WASCO) placed the entire island under a water emergency schedule as the drought worsened. The government has described the current situation as a “water crisis”.

The crisis, initially declared for the north of the island, has expanded to the entire country.

Managing director of WASCO Vincent Hippolyte said that there had not been sufficient rainfall to meet the demands of consumers. At the most recent assessment, the dam’s water level was at 322 feet, while normal overflow levels are 333 feet.

“Despite the rains and the greenery, drought conditions exist because the rivers are not moving. They do not have the volume of water that will enable WASCO to extract sufficient water to meet demand,” he said.

“We are in the early stages in the drought situation. It is not as severe as the later stages, but we are still in drought conditions.”

The government said that experts predicted the drought would persist through the month of August.

Bynoe said what’s happening in St. Lucia and elsewhere in the Caribbean is consistent with the projections of the Inter-Governmental Panel on Climate Change (IPCC) and the Climate Modeling Group from the University of the West Indies.

She said both bodies had given possible future scenarios of climate change as it relates to the Small Island Developing States, and how climate change and climate variability could affect water resources.

“I think generally the issue is that in the region there is a high likelihood that we can have a shortage of water so we can experience droughts; and perhaps at the same time when we do have precipitation it can be very intense,” Bynoe, who is also Director of the School of Earth and Environmental Sciences at the University of Guyana, said.

She noted that the models are saying there can either be too little water or too much water, either of which could create serious problems for the Caribbean.

“With too much water now you can have run off, sedimentation, water pollution and water contamination which means in countries where we depend on surface water the treatment of water become critical and this will then bring cost implications because water treatment is very costly,” Bynoe explained.

“But also, if you are going to treat water you have to use a lot of energy and energy is one of the sectors that contribute to greenhouse gasses. So you can see where the impact of climate change is affecting water but with water treatment you can also contribute to climate change.”

For St. Lucia and its neighbours, Bynoe said lack of financial resources tops the list of challenges when it comes to disaster mitigation and adapting new measures in reference to hydro-climatic disasters.

She used her home country Guyana, which suffers from a high level of migration, as one example of how sustainable development could be negatively affected by capital flight.

“But you also need human capital because first of all governments must work together within the region and lessons learnt in one country can be translated to other countries so that we can replicate the good experiences so that we don’t fall prey to the same sort of issues,” Bynoe said.

“But also social capital within the country in which we try to ensure that all stakeholders are involved, a very democratic process because it’s not only about policymakers; every person, every household must play a role to the whole issue of adaptation, it starts with the man or woman in the mirror,” she added.

In October 2010, Hurricane Tomas passed very near St. Lucia killing 14 people and leaving millions of dollars in monetary losses. The island was one of three Eastern Caribbean countries on which a slow-moving, low-level trough on Dec 24, 2013 dumped hundreds of millimetres of rain, killing 13 people.