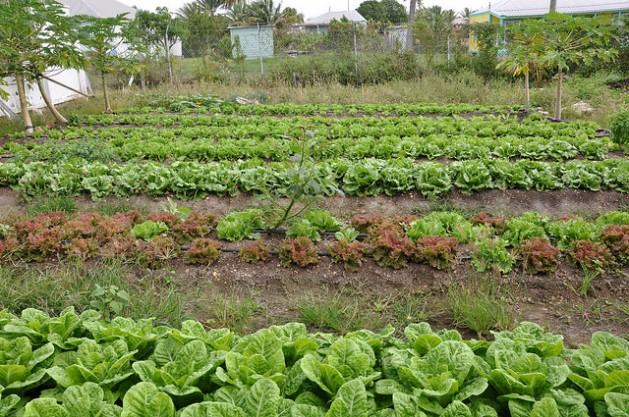 Caribbean scientists are developing drought-tolerant varieties of crops which are then distributed to farmers in countries most severely affected by climate change. Credit: Desmond Brown/IPS

But scientists are fighting back, developing drought-tolerant varieties which are then distributed to farmers in those countries most severely affected.

“We are mainly affected by issues of drought and…CARDI has been looking at methods of sustainable management of production using drought tolerant varieties. We are working with certain commodities and doing applied research aimed at producing them in the dry season,” Dr. Gregory Robin, CARDI representative and technical coordinator for the Organisation of Eastern Caribbean States (OECS), told IPS.

“We’re starting first with the crops that are more significantly affected by drought. We take, for example, dasheen, which is a crop that requires a lot of moisture and I’m working with that crop in St. Vincent and St. Lucia,” he said.

“Validation will serve Jamaica, Grenada, Dominican Republic – all the islands that produce dasheen. Sometimes it’s not cost-effective to do activities in all the islands so some of the sweet potato work done here can be used in St. Kitts, Barbados and islands with similar agro-ecological zones and rainfall patterns,” he added.

The Trinidad-based CARDI (Caribbean Agricultural Research and Development Institute), which has worked to strengthen the agricultural sector of member countries of the Caribbean Community (CARICOM) for more than 30 years, is at the forefront of the research.

“CARDI has a body of professionals around the region so if we have any issues of climate change and drought, CARDI is a body of scientists that is available to all the islands of the CARICOM region,” Robin said.

Another crop being given special attention is sweet potato. Robin explained that for the Caribbean region, sweet potato is very important as a food security staple and foreign exchange earner.

Noting that irrigation is key to productivity, the CARDI official explained that, “I have been working here for the past seven years and it’s the first time I’ve seen it so dry and it’s highlighting the point that we need to look at our rainwater harvesting systems.”

Climate change has also forced Guyana, considered the bread-basket of the Caribbean, to develop new varieties.

“We have also been growing different varieties of crops that are resistant to salt water because one of the impacts of climate change is that the salt water will creep more into the inland areas and so we are looking at salt-resistant rice for example; looking at crops that are much more resilient to dry weather and that can withstand periods of flooding,” Agriculture Minister Dr. Leslie Ramsammy told IPS.

“I remember when I started in agriculture probably 20 years ago farmers used to irrigate using a drum and a bucket,” Bradbury Browne told IPS.

“For example if I want to apply 3,000 gallons of water to an acre of sweet potato I can programme [the irrigation system] so that I don’t have to be there physically to be turning on a hose or a pipe and there would be no issue of flooding if I am called away on an emergency,” said Browne, who now serves as a field technician at CARDI.

Meanwhile, longtime legislator in Antigua and Barbuda Baldwin Spencer noted that more frequent and extreme droughts are expected to become a feature of Caribbean weather.

And he said the impact of such drought conditions will increase heat stress, particularly for the more vulnerable, such as the elderly.

“Despite the decline in the production and export of major agricultural commodities from the OECS, agriculture remains an important sector in the economic and social development of the region from the stand-point of food security, rural stability and the provision of input to other productive sectors,” said Spencer, who served as prime minister of Antigua and Barbuda from March 2004 until Jun. 12 this year.

“These benefits are at risk from climatic events and this risk only increases as the climate continues to change,” he said.

The World Bank said food security is consistently seen as one of the key challenges for the coming decades and by the year 2050, the world will need to produce enough food to feed more than 2.0 billion additional people, compared to the current 7.2 billion.

It said most of the population growth will be concentrated in developing countries, adding pressure to their development needs.

The World Bank added that to meet future food demand, agricultural production will need to increase by 50-70 percent, according to different estimates. And this will happen as the impacts of climate change are projected to intensify overall, particularly hitting the poorest and most vulnerable countries.