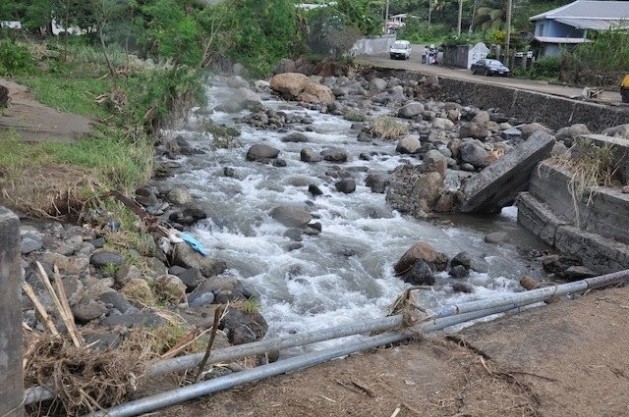 KINGSTOWN, St. Vincent, Jun 15 2014 (IPS) - A freak storm, followed by heavy floods in December 2013, will go down in history as the most destructive natural disaster to have hit the Caribbean island nation of St. Vincent and the Grenadines, with reported total damages and losses of at least 103 million dollars.

Six months later, the country, which is a member of the Organisation of Eastern Caribbean States (OECS), is still in the recovery phase of this crisis, but Tourism Minister Cecil McKee said several lessons have been learned, making the country better prepared for future catastrophic weather events.

“Although Caribbean nations have contributed little to the release of the greenhouse gases that drive climate change, they will pay a heavy price for global inaction in reducing emissions." -- Hela Cheikhrouhou, executive director of the Green Climate Fund
“We have been dealing with our river defences and our coastal defences,” McKee told IPS, adding that the government is not only repairing damaged homes but also “relocating a number of persons whose homes are situated on river banks in areas that are obviously going to put them at risk should we have a reoccurrence of such events.”

A slow-moving, low-level trough on Dec. 24 dumped hundreds of millimetres of rain on the Caribbean island states of St. Vincent and the Grenadines, St. Lucia and Dominica, killing at least 13 people.

Scientists have called the floods the worst disaster in living memory for the small countries, caused by higher-than-average rainfall of 15 inches, which overwhelmed the water systems’ ability to facilitate smooth run-off.

For Mckee, the Christmas disaster was a reminder that “climate change is going to be here with us for some time.”

“If we look at the events of Christmas Eve 2013, I think we can all agree that climate change is affecting not only St. Vincent and the Grenadines but the entire Caribbean in a significant way,” he asserted.

But simply understanding the problem is not enough – many of the island nations in the Caribbean are in dire need of financial resources to assist with mitigation and adaptation.

Flooding is commonplace in the Caribbean, with Guyana, one of the most flood-prone countries in the region, recently benefitting from a multi-million-dollar credit scheme to guard against flooding. 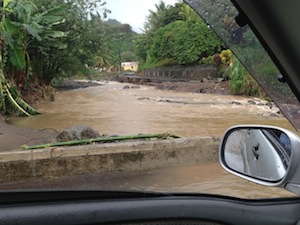 A statement from the World Bank said more than 300,000 people from the flood prone region of East Demerara will benefit from reduced flooding and climate risks as a result of an 11-million-dollar loan from the International Development Association (IDA).

Extreme rainfall in 2005 resulted in flooding and damages estimated at nearly 60 percent of the country’s gross domestic product (GDP), or 465 million dollars at the time.

The impact on poverty was evident and many subsistence farmers, small business operators and vendors were affected.

Sophie Sirtaine, the World Bank’s country director for the Caribbean, said the funds would assist in providing opportunities for all Guyanese by reducing vulnerability to climate change.

“To boost competitiveness, it is essential to address the vulnerability to climate risks and ensure that the skills learnt in the classroom lay the foundation for future work-place success,” she told IPS.

The IDA credit to the Government of Guyana has a final maturity of 25 years, with a five-year grace period.

During its annual board of governors meeting held in Guyana last month, Caribbean Development Bank (CDB) President Dr. Warren Smith said the Caribbean was becoming more aware of the severe threat posed by climate change on a daily basis.

“Seven Caribbean countries…are among the top 10 countries, which, relative to their GDP, suffered the highest average economic losses from climate-related disasters during the period 1993-2012.

“It is estimated that annual losses could be between five and 30 percent of GDP within the next few decades,” he added.

According to Smith, despite the region’s high vulnerability and exposure to climate change, Caribbean countries have failed to access or mobilise international climate finance at levels commensurate with their needs.

Caribbean countries are hoping that the South Korea-based Green Climate Fund (GCF) would prove to be much more beneficial than other global initiatives established to deal with the impact of climate change.

GCF Executive Director Hela Cheikhrouhou, who delivered the 15th annual William Demas Memorial lecture during the CDB meeting, said that the concern expressed by Small Island Developing States all over the world finds a strong echo in the Caribbean, where the devastating effects of hurricanes have been witnessed by many.

“Although Caribbean nations have contributed little to the release of the greenhouse gases that drive climate change, they will pay a heavy price for global inaction in reducing emissions,” Cheikhrouhou warned.

The GCF came into being at the 16th session of the Conference of the Parties (COP) to the United Nations Framework Convention on Climate Change (UFCCC) held in Cancun, Mexico.

Its purpose is to make a significant contribution to global efforts to limit warming to two degrees Celsius by providing financial support to developing countries to help limit or reduce their greenhouse gas emissions, and to adapt to the unavoidable impacts of climate change.

There are hopes that the fund could top 100 billion dollars per annum by 2020.

“Our vision is to devise new paradigms for climate finance, maximise the impact of public finance in a creative way, and attract new sources of public and private finance to catalyse investment in adaptation and mitigation projects in the developing world,” Cheikhrouhou said.

Selwin Hart, climate change finance advisor with the CDB, said the GCF provides an important opportunity for regional countries to not only adapt to climate change but also to mitigate its effects.

McKee said the region is also putting measures in place to mobilise financial support in events similar to what affected the three OECS countries in December 2013.

“Countries are being asked to place monies in regional holding systems that would allow the region to respond more [efficiently] and I think that we are looking more and more to the international bodies and the more developed countries”, which are largely responsible for climate change, for assistance, he told IPS.