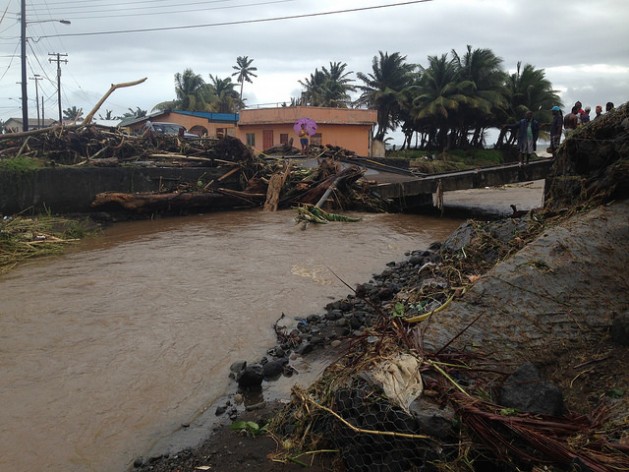 CASTRIES, St. Lucia, Jan 7 2014 (IPS) - Guyanese President Donald Ramotar says the death and destruction caused by intense rainfall in three Caribbean Community (CARICOM) countries over the Christmas holidays is a sign that the region has no time to lose in fortifying its resiliance to climate change.

A slow-moving, low-level trough on Dec. 24 dumped hundreds of millimetres of rain on St. Vincent and the Grenadines, St. Lucia and Dominica, killing at least 13 people. Following the deadly floods and landslides, the Guyanese government approved financial support of 100,000 dollars each for St. Lucia and St. Vincent and 75,000 to Dominica.

“The damage unleashed by the trough [on]…that dreadful night has been extensive and severe." -- Prime Minister Dr. Kenny Anthony

“The scientific evidence is showing that for our region, which is one of the most vulnerable, these weather events will become more frequent as the impacts of global climate change intensify,” Ramotar told IPS.

“Recognising our own vulnerabilities here in Guyana, efforts will intensify in 2014 to improve and expand infrastructure, in particular our sea and river defence and drainage and irrigation systems; enhance our forecasting capabilities and response mechanisms, and build climate resilience in the social and productive sectors of our economy,” he said.

The Guyanese president said these steps will be taken within the framework of the country’s Low Carbon Development Strategy (LCDS).

The LCDS, a brainchild of former president Bharrat Jagdeo, sets out a vision to forge a new low-carbon economy in Guyana over the coming decade. It has received acclaim globally, and is now in the implementation stage.

Ramotar said the time for urgent action is now, citing “millions of dollars in damage and loss of life” resulting from extreme weather events.

In St. Lucia – one of three Organisation of Eastern Caribbean States (OECS) countries that felt the most severe impact of the Dec. 24 floods – Prime Minister Dr. Kenny Anthony said that while the full economic cost of the storm has not yet been determined, it is clear that reconstruction will run into several hundred million dollars.

“The damage unleashed by the trough [on]…that dreadful night has been extensive and severe,” he told IPS.

Anthony told IPS that 90 percent of all ponds have suffered “varying degrees of siltation” and shrimp, fish and livestock have been lost.

“Our infrastructure, some of which was already compromised by Hurricane Thomas [in 2010] has taken a further battering,” he said.

“These extreme weather events are quite traumatic for us, both on our psyche and on our national purse…but this is what climate change is bringing to us and this is what we have to unfortunately look forward to,” he told IPS.

At the same time, Fletcher said citizens and commercial enterprises must do a better job of solid waste management, since the indiscriminate disposal of garbage clogs waterways and causes serious problems.

“Some people treat the rivers as garbage disposal sites. This is something that we have to pay close attention to,” he told IPS.

The Caribbean Disaster Emergency Management Agency (CDEMA) said it continues to be in contact with the affected countries and is coordinating the response and recovery support. CDEMA is assisting the three impacted states in developing proposals to access the Caribbean Development Bank (CDB) Emergency Response Grant facility and the Emergency Recovery Loan facility.

The government of Barbados is making available a coast guard vessel to assist in transporting emergency supplies to St. Lucia and St. Vincent and the Grenadines. The “Trident” is capable of transporting more than four tonnes of cargo at one time.

In Dominica, where 65 households were affected by flooding, disaster officials estimate that 1.13 million dollars is required for immediate clean-up.

Prime Minister Anthony said the government of St. Kitts and Nevis has dispatched via the Eastern Caribbean Central Bank 1.36 million dollars as a donation to assist St. Lucia with its recovery efforts.

Britain is also providing 1.36 million dollars for vital emergency humanitarian support to St. Vincent and the Grenadines and St. Lucia.

British Minister of State for International Development Alan Duncan is visiting the region, and is meeting with the prime ministers of the two affected countries to discuss the humanitarian situation and reconstruction needs.

The newest report by the Intergovernmental Panel on Climate Change (IPCC) said the ability of tourism-dependent Caribbean destinations like Barbados, Belize, Jamaica and the Bahamas, among others, to provide not only for their residents, but for the many thousands of visitors demanding water, energy, and other natural resources, is in jeopardy.

“As severe storms, drought, hurricanes, and other climate challenges rise to the forefront of issues being addressed by CARICOM countries, emerging data sheds new light on the future challenges in store for the islands and coastal nations throughout the region,” the report noted.