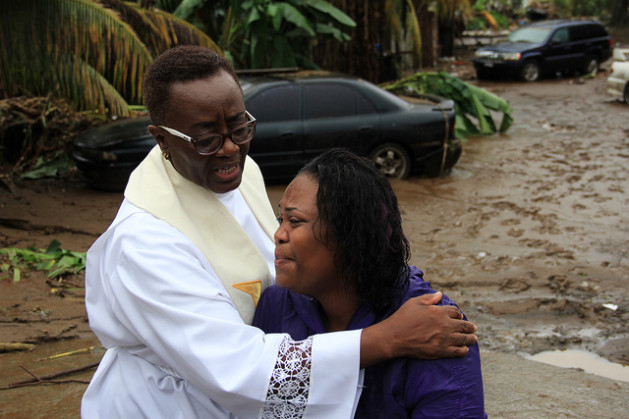 A cleric prays with Colleen James in Cane Grove, St. Vincent hours before it was confirmed that James' sister had died in the floodwaters. Her two-year-old daughter is still missing. Credit: Desmond Brown/IPS

KINGSTOWN, St. Vincent, Dec 26 2013 (IPS) - Colleen James arrived in St. Vincent and the Grenadines from Canada two days before Christmas hoping to enjoy the holiday season with her family. Now she’s getting ready to bury her two-year-old daughter and 18-year-old sister.

“I never do nothing wrong. I always do good,” a dazed James told IPS as she looked out across the flood damage occasioned by a slow-moving low-level trough that brought torrential rains, death and destruction not only to St. Vincent and the Grenadines but St. Lucia and Dominica.

"We looked across and saw people floating down a river." -- Curt Clifton

In St. Lucia, five people were killed, including Calvin Stanley Louis, a police officer who died after a wall fell on him as he tried to assist people who had become stranded by the floods.

Trinidad’s Prime Minister Kamla Persad Bissessar has requested that the Office of Disaster Preparedness and Management (ODPM) mobilise food and emergency supplies to be sent to St Lucia.

No requests have come from the other affected islands as yet.

St. Vincent and the Grenadines Prime Minister Dr. Ralph Gonsalves, who has cut short his holiday in London, is due here on Thursday. 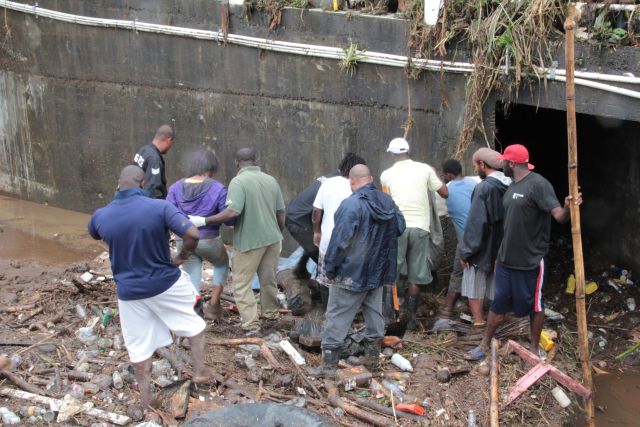 Curt Clifton told IPS he was visiting a friend in the Cane Grove community on the outskirts of the capital, Kingstown, when they “looked across by the neighbour and saw people floating down a river” and rushed to their aid. They managed to rescue James and one of her daughters.

The floods have caused widespread damage in all three islands. Roads, bridges and in some cases, houses, have been swept away and the telecommunications companies, as well as public utilities, are urging patience as they assess the situation.

“We have seen quite an extent of damage, particularly from the gutters coming down, bringing a lot of debris on the road,” Montgomery Daniel, minister of housing, informal human settlements, lands and surveys, told IPS.

“It is going to take some time for us to clean it up. We are going to need the assistance of heavy-duty equipment,” he said.

Sixty-two people were left homeless in the wake of the flooding.

Health officials have also urged residents to be wary of diseases associated with the floods as in many cases pipeborne water has been disrupted.

Dominica’s Environment Minister Kenneth Darroux, a surgeon by profession, is hoping that the island’s plea to the World Bank for financial assistance will help the island better prepare in the long-term for the devastating effects of climate change.

Darroux is spearheading efforts by the Dominica government to secure 100 million euro from the World Bank to fund the country’s Strategic Programme for Climate Resilience (SPCR).

“Discussions are at an advanced stage,” Darroux, who now serves as minister of environment, natural resources, physical planning and fisheries, told IPS. The funds will be part loan and part grant.

Darroux noted that “the traditional climate change and environmental issues were not really producing the results that the government wanted,” adding that climate change should be viewed as a development issue rather than just isolated changes in the climate.

Dominica has so far received 21 million dollars from the climate investment fund, 12 million of which is grant financing and nine million is “highly concessionary financing”, Darroux said.

The country also expects a further 17 million dollars from the Pilot Programme for Climate Resilience (PPCR) and the Disaster Vulnerability Reduction Project (DVRP), which is a regional project being undertaken by the World Bank which is running simultaneously with the PPCR.

“This investment package will seek to begin addressing the deficiency that was identified in the SPCR,” Darroux told IPS.

“I am confident that the implementation of this project will show the world that the people of Dominica stand ready to play out part in the climate change fight.”

The PPCR is a collaborative effort between Dominica, Haiti, Grenada, Jamaica, St. Lucia and St. Vincent and the Grenadines.

Each island has a national programme and the Caribbean Community Climate Change Centre (5Cs) serves as a focal point for the regional tracking of activities.

The issue of climate finance is a major one for Caribbean countries and several decisions taken at the 19th session of the Conference of the Parties to the United Nations Framework Convention on Climate Change (COP 19) in Warsaw, Poland, this past November are of particular relevance to the region.

The Adaptation Fund Board (AFB) reached its target of mobilising 100 million dollars to fund six projects. These include a project in Belize, which had been submitted by PACT, one of only two National Implementing Entities (NIE) in the Caribbean accredited to the Adaptation Fund.

The other NIE is in Jamaica, which has also received funding for its project.

The Green Climate Fund (GCF) was also operationalized at COP 19. Developed countries have been asked to channel a significant portion of their 100-billion-dollars-per-annum pledge for climate change through the GCF.

The Board of the GCF has been tasked with ensuring that there is an equitable balance of funding for both adaptation and mitigation. All developing countries are eligible for funding from the GCF.