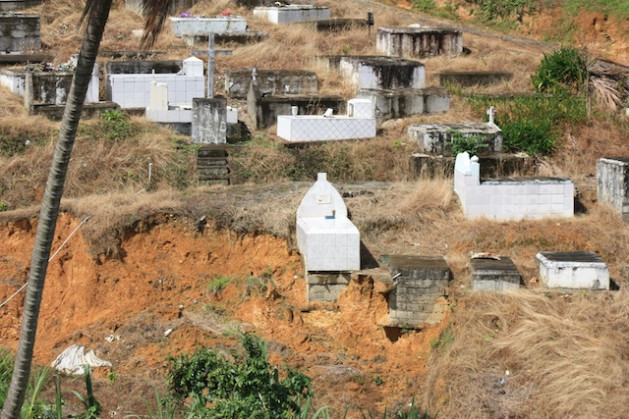 This cemetery in St. Lucia was among the sites which suffered damage when Hurricane Tomas hit the island in 2010. The Oct. 31 hurricane killed 14 people in St. Lucia. Credit: Desmond Brown/IPS

MOCHO, Jamaica, Dec 10 2013 (IPS) - The Mocho Mountains that run through the centre of Jamaica were once covered by lush tropical forests that helped control rainfall. Now, much of the forests and farmlands have been destroyed and the community is hard hit by the resultant extreme weather.

“[The area] is one of those that was severely mined for bauxite and so the trees were lost and so too was the arable land for farming,” Indi McLymont-Lafayette, the regional coordinator for Panos Caribbean, told IPS. Panos, a global network of institutes, works to give a voice to poor and marginalised communities.

McLymont-Lafayette, who grew up in Mocho, said the community was now very vulnerable to climate change.

“They were very hard hit by hurricanes Ivan and Dean [in 2004 and 2007 respectively]. There are longer droughts and the farmers are grappling with issues of trying to access water because the community is primarily rain-fed,” she said.

In the past, Mocho, which is about one and a half hour’s drive from the capital, Kingston, was well known as the breadbasket of the central parish of Clarendon.

“And if [there is] sporadic rainfall, which is also predicted under the climate change umbrella, it’s harder for the farmers on the ground to regularise their planting season so that means it has implications for the food security of Jamaica,” McLymont-Lafayette added.

She said she clearly remembered the first time she experienced a natural disaster. It was in 1988, when Hurricane Gilbert made landfall on the island. Before that, the last hurricane had occurred 37 years previously, in 1951.

“When I was growing up in my teens there was only one hurricane, which was Gilbert in 1988. It was an exciting thing for me then because it was the first hurricane we’d had since 1951 and I heard about that from my grandparents,” she said.

But when it came, the devastation it caused made her “never want to see a hurricane again”.

“But of course that has not been the case. And over the past 15 years, almost every year we’ve had tropical storms or some hurricanes.

“I think if you look at the statistics between 2002 and 2007, up to 70 million dollars [was] lost due to extreme weather events, and that is a lot of money for a developing country like Jamaica. So I know it’s a serious concern for us and many of the small islands in the Caribbean,” she said. 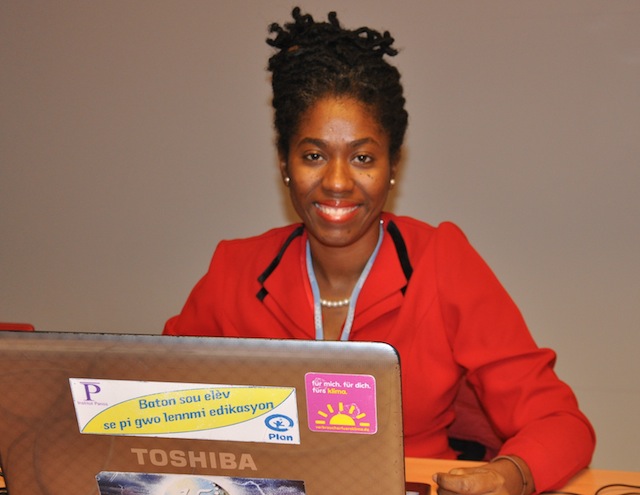 Indi McLymont-Lafayette, the regional coordinator for Panos Caribbean, said that Jamaica had put a lot of focus on preparing for climate change. Credit: Desmond Brown/IPS

“That’s a point that we’ve been at pains to [explain] to the international community – that while for some of them climate change is an academic discussion or some sort of esoteric concept, for us in the Caribbean we are living climate change,” Fletcher said.

“Fishers are seeing their fish catches affected because the oceans are warmer, coral reefs are bleaching and fishery is not as productive as it used to be. People are seeing coastlines now being inundated and the sea encroaching further inland.”

He said that St. Lucia was still recovering from Hurricane Tomas, which hit the island on Oct. 31, 2010 and killed 14 people, and explained that the government was still repairing much of the damage it caused.

He also lamented that the bread and butter industries for most Caribbean countries, like agriculture and tourism, were already being affected and stood to be affected even further.

“Very soon I think we will start seeing differences in fertility for some of our agricultural lands, because for us in the Caribbean there isn’t any place that isn’t too far away from the sea,” Fletcher explained. “As salt water starts coming inland, then it starts having impacts on the fertility of your agricultural lands so we are experiencing climate change in so many different ways.”

For Antigua and Barbuda, McLymont-Lafayette pointed to the climate prediction in Germanwatch‘s 2008 climate risk index that Barbuda would probably sink in another 40 years.

“When I heard that, as a Caribbean person, I was devastated because I primarily thought of climate change as impacting the Pacific and those places,” she said.

But Caribbean countries are fighting back and have recognised the importance of adaptation to cope with the impact of climate change.

Just last week the Barbados House of Assembly gave the green light for government to utilise 13.3 million dollars from the consolidated fund for an on-going project to battle climate change and protect the country’s coastline.

Minister of Environment and Drainage Denis Lowe said Barbados needed to fight back, since climate change was already leading to dying and bleached coral.

“We believe that there is a direct correlation between the state of the corals around the island and the intensity of weather patterns and weather systems, including sea level rise and temperature of water,” he said.

The minister explained that there were 20 coral reef sites around the island that were in need of protection.

McLymont-Lafayette said that Jamaica had put a lot of focus on preparing for climate change. “Last month, we tabled a climate change policy in cabinet and Jamaica has established a Climate Change Ministry, which is one of the few in the world, so we are taking this very, very seriously,” she said.

Jamaica’s Ministry of Water, Land, Environment and Climate Change was created in January 2012. It has responsibility for the formulation and implementation of policy relating to its related subject areas.

Seventy percent of Jamaica’s infrastructure is along the coast.

“Our airports, our hotels are on the coast and in Negril where we advertise seven miles of beautiful beaches there has been significant beach erosion partly due to sea level rise and other factors,” McLymont-Lafayette said.

“So the bottom line is that we have to put measures in place to restore the coastline if we want tourism to continue to be sustainable.”