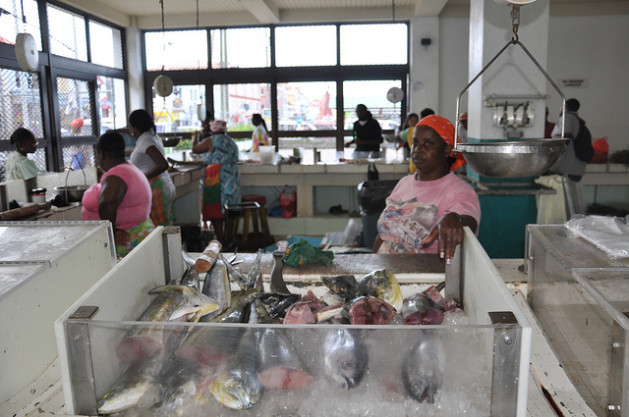 A vendor selling fish at a market in Grenada. Credit: Desmond Brown/IPS

WARSAW, Nov 15 2013 (IPS) - Eating fish has been an integral part of the Caribbean’s cultural traditions for centuries. Fish is also a major source of food and essential nutrients, especially in rural areas where there are scores of small coastal communities.

“That is the protein that they have to put in their pot, and sometimes it has to stretch for very many mouths,” Dr. Susan Singh-Renton, deputy executive director of the Caribbean Regional Fisheries Mechanism (CRFM), told IPS.

"Globally we have to be prepared for significant economic and ecosystem service losses." -- Ulf Riebesell

For people who rely on the ocean’s ecosystem services – often in developing countries like those of the Caribbean Community (CARICOM) – a major new international report on the world’s oceans is particularly worrying.

Experts warn that the acidity of the world’s oceans may increase by 170 percent by the end of the century, bringing significant economic losses. People who rely on the ocean’s ecosystem services – often in developing countries – are especially vulnerable.

The group of experts has agreed on “levels of confidence” in relation to ocean acidification statements summarising the state of knowledge.

The summary was led by the International Geosphere-Biosphere Programme and results from the world’s largest gathering of experts on ocean acidification ever convened. The Third Symposium on the Ocean in a High CO2 World was held in Monterey, California in September 2012, and attended by 540 experts from 37 countries. For the benefit of policymakers, the summary will be launched on Nov. 18, at the U.N. climate negotiations known as COP19 under way here at the national stadium of Poland.

Scientists say that marine ecosystems and biodiversity are likely to change as a result of ocean acidification, with far-reaching consequences for humans. Economic losses from declines in shellfish aquaculture and the degradation of tropical coral reefs may be substantial owing to the sensitivity of molluscs and corals to ocean acidification.

“What we can now say with high levels of confidence about ocean acidification sends a clear message. Globally we have to be prepared for significant economic and ecosystem service losses,” said one of the lead authors of the summary and chair of the symposium, Ulf Riebesell of GEOMAR Helmholtz Centre for Ocean Research.

“But we also know that reducing the rate of carbon dioxide emissions will slow acidification. That has to be the major message for the COP19 meeting,” he said.

Singh-Renton told IPS that the socioeconomic impacts for the Caribbean region from this and other climate-related activities would be on two fronts – revenues and costs.

“In terms of revenues, this is linked of course to provision of incomes and livelihoods. It’s linked to food security at the consumer end,” she explained. “If you are normally taking 1,000 tonnes a year as a fisherman, you could be taking much less than that and that will decrease your catch rates and also your food supply to the local population and the revenues associated with that.”

Antiguans, for example, annually consume more fish per capita (46 kg) per year than any other nation or territory in the Caribbean.

Permanent Secretary in the Ministry of Trade for Antigua and Barbuda, Ambassador Colin Murdoch, said a decrease in fish stocks could also see small island states missing out on significant amounts of potential foreign exchange from the fisheries sector.

“We are geographically close to some very large markets for fisheries products,” he said of his home country.

The main fishing waters are near shore or between Antigua and Barbuda. The government has encouraged modern fishing methods and supported mechanisation and the building of new boats. Exports of fish commodities is valued at 1.5 million million dollars per year.

One outcome emphasised by experts in the report is that if society continues on the current high emissions trajectory, cold water coral reefs, located in the deep sea, may be unsustainable and tropical coral reef erosion is likely to outpace reef building this century. However, significant emissions reductions to meet the two-degree target by 2100 could ensure that half of surface waters presently occupied by tropical coral reefs remain favourable for their growth.

“Emissions reductions may protect some reefs and marine organisms but we know that the ocean is subject to many other stresses such as warming, deoxygenation, pollution and overfishing,” said author Wendy Broadgate, deputy director at the International Geosphere-Biosphere Programme.

“Warming and deoxygenation are also caused by rising carbon dioxide emissions, underlining the importance of reducing fossil fuel emissions. Reducing other stressors such as pollution and overfishing, and the introduction of large scale marine protected areas, may help build some resilience to ocean acidification.”

The CFRM deputy executive director said storms and windy conditions have also been taking a toll on the vital fishing sector in the Caribbean and climate change impacts in other sectors have in the past caused increased dependence on the fishing sector.

“We have been seeing less fishing days so instead of being able to fish 200 days a year you might be able to fish for only 150 days in a year,” she told IPS.

“In terms of the impacts, Caribbean fishing boats and coastal infrastructure are vulnerable to storm damage hence it can disrupt industry operations. The rural poor are going to be directly affected by this [because] artisanal, small-scale fishing employ and feed much of the world’s rural poor.

“If we really care about poverty eradication and lifting the quality of livelihoods, we have to take care of what is accessible to the poor man in terms of food supply and quality, not just what he gets but the quality of it,” Singh-Renton added.