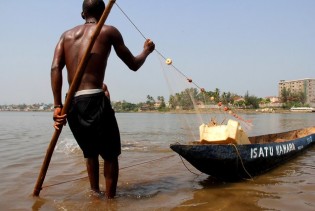 What Lies Ahead for Oceans, Seas and Marine Resources

By Andrew Hudson
In September 2015, the international community adopted 17 Sustainable Development Goals, including Goal 14: Conserve and sustainably use the oceans, seas and marine resources for sustainable development.

By Manipadma Jena
The eleventh meeting of the Conference of the Parties to the Convention on Biological Diversity (COP 11 CBD) approaches amidst a hailstorm of public protest against the ‘tragedy of the commons’ – the rapid loss of biodiversity in forests, oceans and indigenous community farmlands.

By Stephen Leahy
The 43rd Pacific Islands Forum was held in Rarotonga, Cook Islands, from 28 to 30 August 2012 involved leaders from the 16 member Pacific nations including Australia and New Zealand. This year's theme: “Large Ocean Island States – the Pacific Challenge” with major topics including climate change, trade and fishing. US Secretary of State Hillary Clinton along with more than 500 officials from nearly 60 countries including China, and European Union attended as observers and participated in other meetings in the Cook Islands, some 3000 km northeast of New Zealand.
Next Page »
ADVERTISEMENT ADVERTISEMENT