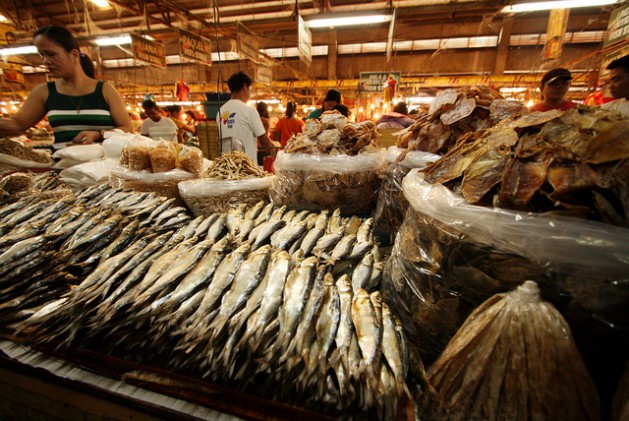 A fish market in the Philippines. Credit: Kara Santos/IPS.

“Life below water, which the Sustainable Development Agenda commits us to conserve, is a major ally in our effort to meet a host of challenges, from food security to climate change,” said FAO Director-General José Graziano da Silva.

The FAO’s annual report on The State of World Fisheries and Aquaculture (SOFIA) found that global supply of fish for human consumption has outpaced human population growth in the past five decades, and is double the level of the 1960s.

The growth in consumption is largely due to aquaculture: the farming of freshwater and saltwater populations under controlled conditions, rather than harvesting of wild species. Aquaculture now provides half of all fish for human consumption.

Some 57 million people were engaged in the primary fish production sectors, a third of them in aquaculture.  “Developing countries were the source of $80 billion of fishery exports, providing higher net trade revenues than meat, tobacco, rice and sugar combined,” said the FAO.

Because of this, the report found that a large amount of harvested fish are spoiled and wasted. In Africa, some estimates put post-harvest losses at 20–25 percent, and even up to 50 percent.

In the Mediterranean and Black Sea, it found an alarming 59 percent of assessed stocks are fished at biologically unsustainable levels.

In the Northwest Atlantic, the annual catch is now less than half the level of the early 1970s, but Halibut, flounder and haddock stocks in that area are showing signs of recovery after the implementation of effective management regulations.

“This report shows that capture fisheries can be managed sustainably, while also pointing to the enormous and growing potential of aquaculture to boost human nutrition and support livelihoods with productive jobs” said da Silva.