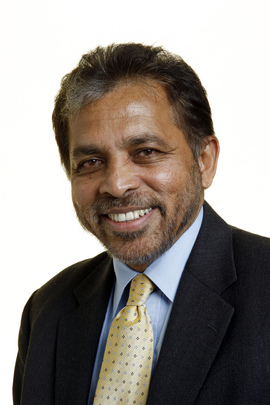 But despite progress made over the last two decades, says FAO, some 870 million people still suffer from chronic hunger.

What if the earth’s finite agricultural resources run out as a result of drought, desertification, climate change and natural disasters?

There is always the high seas and ocean floors, says Ambassador Palitha Kohona, who co-chairs a U.N. Working Group on the Conservation and Sustainable Use of Marine Biological Diversity Beyond Areas of National Jurisdiction.

The seas and oceans, which cover 70 percent of the planet, are probably the last frontier on earth with vast areas still to be explored and life forms still to be discovered, he told IPS. And 65 percent of the oceans are beyond national jurisdiction, he added.

The mandate of the Working Group, co-chaired by the Legal Adviser to the Netherlands, covers the conservation and sustainable use of marine biological diversity beyond areas of national jurisdiction, and includes genetic resources, said Dr Kohona, who is also Sri Lanka’s Permanent Representative to the United Nations and former chief of the U.N. Treaty Section.

In an interview with IPS, he said, “We have a better knowledge of outer space than of the oceans which provide sustenance to over a billion people, mostly in developing countries.”

But global fisheries are under serious threat of collapsing mainly due to industrialised fishing.

"We have a better knowledge of outer space than of the oceans, which provide sustenance to over a billion people." -- Dr. Palitha Kohona

For example, he said, stocks of cod, southern blue fin tuna and orange roughy are down to critical levels. And coral reefs are affected by ocean warming and acidification.

The new frontier opening up in the oceans is bio-prospecting and bio-harvesting, he added.

“It is now firmly believed that many new pharmaceuticals and other products can be developed from the genetic material available in the seas, especially in the deep seas, on the sea bed and in the sub surface of the sea bed,” Kohona noted.

Q: How far have we gone in exploiting these rich resources?

A: So far, only a handful of advanced countries possess the vessels capable of harvesting genetic material, especially from deep sea trenches and hydrothermal vents.

Even less have the ability to conduct research and analysis on this material and basic research is mainly funded by industrialised states.

Developing countries argue that the benefits arising from developments made from material obtained from areas beyond national jurisdiction should be shared equitably through a global convention since the source of this material was probably in the area recognised as the common heritage of mankind.

Q: What are the primary objectives of your Working Group?

A: The Working Group is required to make recommendations to the General Assembly with a view to ensuring that a future legal framework will address the complex issues raised.

In fact, it is the expectation of many delegations that a legal instrument will result from these discussions.

Q: In its report last month, the High Level Panel of Eminent Persons predicted that extreme hunger — and poverty — could be eradicated by 2030? If so, what role can the high seas and oceans play in alleviating the world’s food crisis?

A: With extreme hunger, globally a billion people go to sleep every night without eating dinner, and extreme poverty, 1.2 billion people live on less than 1.25 dollars a day, our resources need to be more efficiently and equitably distributed.

Nearly 30 percent of available food goes to waste in developed countries due to wasteful consumption patterns. Global fisheries employ and provide nutrition to, including proteins, over a billion people.

It is a worrying reality that 70 percent of fish stocks are in serious risk of collapsing due to over fishing. If fish stocks collapse, the consequences will be disastrous.

In addition, the warming and increasing acidification of the oceans, rising sea levels, and coral bleaching will affect fish stocks and other life forms in the seas, in some cases pushing stocks to new habitats, especially tropical fish stocks.

While we focus on protecting whales, which we must also do, economically relevant stocks are reaching extinction point. It is imperative that we properly manage, conserve and sustainably use what is an essential but rapidly diminishing resource.

Q: What progress has been achieved in the negotiations on marine biological diversity beyond national jurisdiction?

A: Progress has been slow. While developing countries have been actively advocating the equitable sharing of the benefits arising from research into genetic material derived from areas beyond national jurisdiction, the sharing of information and technology and capacity building, the countries that conduct the research are reluctant to concede these readily.

They argue that it costs over one billion dollars to develop and bring a single new product to the market. Many products never reach the market despite the millions spent to develop them.

In the meantime, 4,000 marine organisms have been identified in relation to 40,000 new patents filed. Sometimes it is difficult to determine the actual origin of such material. But I believe an equitable formula for benefit sharing can be developed.

Q: How interested are member states in exploiting marine resources?

A: The major maritime countries, including the United States, Japan, Russia, member states of the European Union, India, Argentina, Brazil and over 120 other states participated in the discussions, along with civil society and academics. Our next sessions will take place at the United Nations, Aug. 19 to 23 this year.