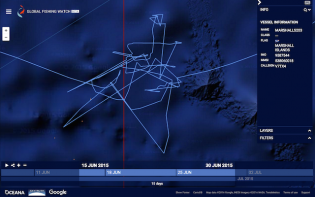 By Manipadma Jena
When Olive Ridley sea turtles nest on the beach in his village, little Warthy Raju can barely wait for the millions of hatchlings, with their three-inch shells and thumb-sized heads, to scramble out.

By Amantha Perera
Somali pirates on the southwest Indian Ocean have become one of the biggest security risks for commercial maritime shipping over the last several years. But even as piracy gave rise to international furore, an unlikely benefactor emerged: bluefin tuna stocks in the Indian Ocean.

By Emilio Godoy
The authorities in Mexico seem to have thrown in the towel in the fight against illegal fishing, which is hurting fisheries, the environment, and incomes.
Next Page »
ADVERTISEMENT ADVERTISEMENT