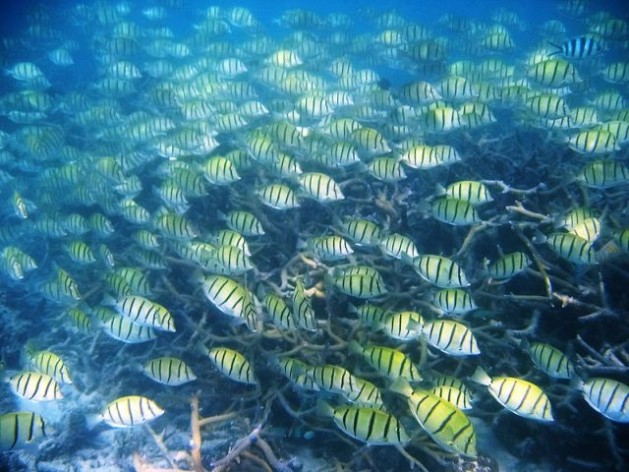 UNITED NATIONS, Apr 3 2014 (IPS) - At a political level, when the United Nations speaks of a “high seas alliance”, it is probably a coalition of countries battling modern piracy in the Indian Ocean.

But at the environmental level, the High Seas Alliance (HSA) is a partnership of more than 27 non-governmental organisations (NGOs), plus the International Union for the Conservation of Nature (IUCN), fighting for the preservation of marine biodiversity.

As a U.N. working group discusses a proposed “international mechanism” for the protection of oceans, the HSA says high seas and the international seabed area, which make up about 45 percent of the surface of the planet, “are brimming with biodiveristy and vital resources.”

But they are under increasing pressure from threats such as overfishing, habitat destruction and the impacts of climate change.

The HSA has expressed its strong support for negotiations to develop a new agreement to establish a legal regime to safeguard biodiversity in the high seas.

Fisheries at the Tipping Point

According to the Food and Agriculture Organisation (FAO), cited by Greenpeace International, around 80 percent of the world's fisheries are fully exploited, over exploited or significantly depleted.

Some species have already been fished to commercial extinction; many more are on the verge.

And according to the World Bank, the lost economic benefits due to overfishing are estimated to be in the order of 50 billion dollars annually.

The value of illegal, unreported and unregulated fishing (IUU) on the other hand is currently estimated to amount to 10-23.5 billion dollars per year.

The deep ocean seafloor has also become the new frontier for major corporations with mining technology, promising lucrative returns, but not counting the impacts of such a destructive activity on other sectors, ecosystem services and coastal communities.

Meanwhile, Greenpeace says, the impacts of climate change are causing dead zones in the ocean, increasing temperatures and causing acidification.

Any such treaty or convention will be a new implementing agreement under the 1994 U.N. Convention on the Law of the Sea (UNCLOS).

The Working Group, which is expected to conclude its four-day meeting Friday, says it is at a critical juncture of its work, and discussions are expected to continue into the future.

“The next three meetings present a clear opportunity to try and overcome remaining differences and to crystallise the areas of convergence into concrete action,” U.N. Legal Counsel Miguel de Serpa Soares said in his opening remarks Monday.

Sofia Tsenikli, senior advisor on Oceans Policy at Greenpeace International, told IPS, “Our oceans are in peril and in need of urgent protection.”

Faced with multiple threats, including climate change, ocean acidification and overfishing, the oceans can only provide livelihoods in the future if governments establish a global network of ocean sanctuaries today, she added.

“It’s simply scandalous that still less than one percent of the high seas is protected,” Tsenikli said.

She said governments must listen to the call by U.N. Secretary General Ban Ki-moon and act urgently to protect marine life in the oceans by setting up a U.N. high seas biodiversity agreement.

On Monday, Ban said, “If we are to fully benefit from the oceans, we must reverse the degradation of the marine environment due to pollution, overexploitation and acidification.”

He urged all nations to work towards that end, including by joining and implementing the existing UNCLOS.

Friedrich Wulf, international biodiversity campaigner at Friends of the Earth (FoE) Europe, told IPS, “I can say the open sea is an area of dispute and is a major obstacle for designating the 40 percent protected areas target” – called for by the 1993 Convention on Biological Diversity (CBD) – “and that this area is not feasible under this convention.”

“The issue has now been moved to the rather old UNCLOS but was quite heavily debated and I am not sure UNCLOS covers it well,” he said.

“So I think a new effort to have a U.N. regulation is very helpful. I don’t think it will be possible to reach Aichi target 6 on marine biodiversity without it, as there is a legislative gap in the open sea,” he added.

Aichi targets were adopted at a conference in Aichi, Japan, back in 2010.

Target 6 reads: By 2020, all fish and invertebrate stocks and aquatic plants are managed and harvested sustainably, legally and applying ecosystem based approaches, so that overfishing is avoided, recovery plans and measures are in place for all depleted species, fisheries have no significant adverse impacts on threatened species and vulnerable ecosystems and the impacts of fisheries on stocks, species and ecosystems are within safe ecological limits.

At the June 2012 Rio+20 conference on the environment in Brazil, member states made a commitment to address the conservation and sustainable use of marine biodiversity beyond areas of national jurisdiction on an urgent basis.

“Healthy, productive and resilient oceans, rich in marine biodiversity, have a significant role to play in sustainable development as they contribute to the health, food security and livelihoods of millions of people around the world,” the meeting concluded.

The Working Group says it will present its recommendations on the scope, parametres and feasibility of the instrument to the General Assembly to enable it to make a decision before the end of its 69th session, in September 2015.

The meetings are being co-chaired by the Permanent Representative of Sri Lanka to the United Nations, Ambassador Palitha T. B. Kohona, and the Legal Adviser of the Ministry of Foreign Affairs of the Netherlands, Liesbeth Lijnzaad.