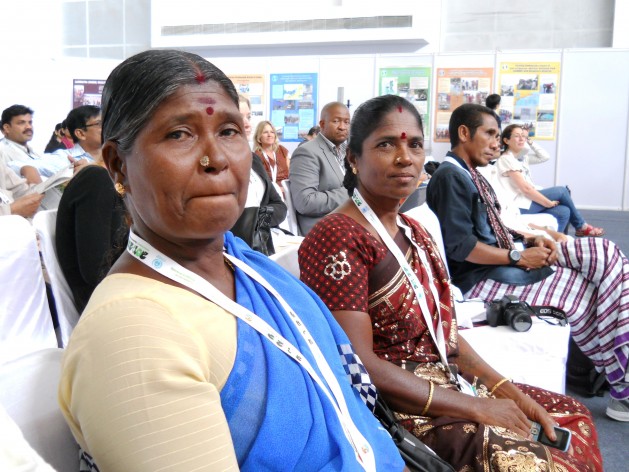 HYDERABAD, India, Oct 12 2012 (IPS) - Indian civil society organisations see in the 11th United Nations Conference of the Parties (COP11) to the Convention on Biodiversity (CBD), underway in this south Indian city, a rare opportunity to highlight alleged neglect of biodiversity along the country’s extensive coastal and marine areas.

No fewer than 15 power plants, six captive ports and six mega shipyards are coming up along a small 150 km stretch on the western coastline in the state of Maharashtra alone, delegates to the Oct. 8-19 international conference were told.

On the eastern coastline of this peninsular country, in the state of Andhra Pradesh, host to COP11, there are 10 new ports and 15 thermal power projects on the anvil.

Additionally, Andhra Pradesh has proposed 70 ‘special economic zones’ in 15 of its 23 districts, including a staggering five million acres in a coastal corridor that will include airports, seaports, ship breaking units, petrochemical complexes and other polluting industries.

“None of India’s environmental impact assessments (EIA), conducted by the ministry of environment and forests, take thermal pollution of sea water into account, while existing policy does not make cumulative assessments  mandatory,” says Ashish Kothari of Kalpavriksh, a leading non-governmental organisation (NGO).

“Our EIA system itself is essentially flawed,” Kothari, tells IPS.

Whenever marine conservation actually happens it does not take local communities into account, says the International Collective in Support of Fishworkers (ICSF), another leading NGO that speaks for artisanal fishing communities.

In the southeastern coastal state of Tamil Nadu, near the Gulf of Mannar, an entire community stands threatened because its women have been barred from pursuing their traditional occupation of diving for seaweed.

The area has now been declared a marine national park and comes under the protection of the forest department, leaving communities that depend on the collection of seaweed for their livelihood stranded.

Collecting seaweed has been banned by the department on the grounds that it may be detrimental to corals – though officials have little to say about a major nuclear park coming up in nearby Koodankulam that could raise the temperature of coastal waters.

Seaweed, used in cosmetic and lifestyle health products, grows on dead coral underwater and is sustainably harvested by the nimble fingers of women divers to supplement family incomes.

“We have been collecting seaweed since our forefathers’ time,” Lakshmi, 52, from Ramanathapuram district, told rapt audiences on the sidelines of the COP 11 deliberations.

“We depend on harvesting seaweed for our livelihoods, why should we destroy live coral?” she asks.

The women said they were not consulted when the park’s boundaries were demarcated, and accused forest department officials of undue harassment such as by interfering with or preventing artisanal fishing.

“They (forest department) had to seek our help recently to put out a fire probably started by a carelessly thrown cigarette butt by one of their guards,” Lakshmi said, explaining the community’s local knowledge and experience in natural resource maintenance.

“You cannot preserve an ecosystem by throwing people out,” says V. Vivekanandan of the South Indian Fisheries Federation. “The department needs to use local strength in fisheries management.”

The M.S. Swaminathan Research Foundation, begun by India’s best-known agricultural scientist and named after him, has spearheaded several initiatives on coastal biodiversity conservation.

Notable among these is one to promote the growth of mangroves that has led to a national consultation called ‘Securing Coastlines and Securing Livelihoods’ earlier this year.

The consultation has recommended a new approach to coastal and marine conservation, taking biodiversity issues into account and linking them integrally to the wellbeing of local communities. However, the consultation still needs to find a place in policymaking.

While laying down the principle of national sovereignty over biological resources, the CBD expected this to translate into community sovereignty with farmers, fishers and pastoralists placed at the centre of preserving biodiversity – not just their knowledge, innovations and practices.

India’s own Biodiversity Act, devised to be in line with the CBD, requires “consultation” with local communities, but there are too many instances of populations being forcibly dislocated from their traditional farming or fishing lands to make way for mega projects.

Chandrika Sharma, executive secretary of ICSF, pointed to the irony of poor coastal people, especially women, being adversely affected by development and conservation policies, while lip service is paid to empowering them in the interests of conserving biodiversity.

“Their activities are affected by government policies banning fishing in protected areas while development projects are allowed to come up,” Sharma said. “Local communities can play an important role in governing resources as they have been around for generations and know the ecosystem best.”