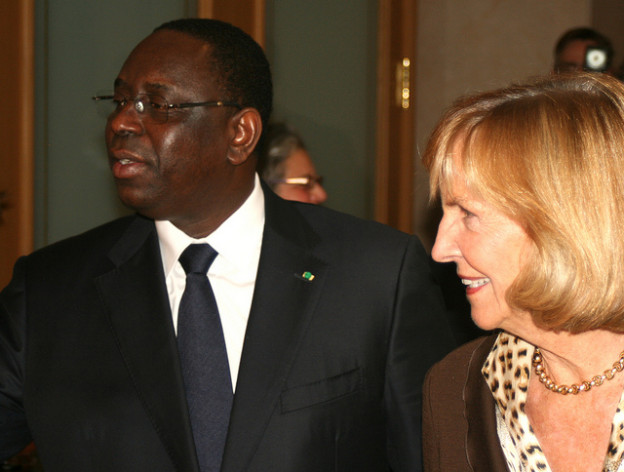 WASHINGTON, Apr 15 2013 (IPS) - Hours after President Macky Sall of Senegal met in Washington with President Barack Obama late last month, he stepped into a brightly lit hotel meeting room to accept the Peter Benchley Award for National Stewardship of the Ocean, the only prize for ocean conservation given to heads of state.

As he had promised during his campaign, Sall, upon his election a year ago, voided a series of unpopular contracts his predecessor had signed with foreign industrial vessels that catch huge amounts of sardinella, a depleted seagoing fish that is now West Africa’s main source of animal protein, and turn it into fishmeal for foreign aquaculture.

“President Sall is now moving forward with plans to assure a sustainable domestic fishery free of foreign exploitation, creating a model for West Africa and the world,” said Wendy Benchley, widow of “Jaws” author Peter Benchley, before handing him the award as representatives from Greenpeace and the World Bank applauded.

But in an interview just before the ceremony, Sall said the ban was not permanent and he was planning to bring back the foreign sardinella trawlers in six months. “We’re giving the stock a year and a half to recover,” he told IPS. “Now we need to find a responsible approach to managing this fishery sustainably so that our fishermen can fish and foreign trawlers can also fish in strictly controlled conditions.”

“That would be suicide,” says Philippe Cury, who heads a fisheries research institute in Sète, France, and has studied West African fisheries. “There’s already not enough sardinella as it is.”

The foreign sardinella vessels have significantly depleted the population, which travels between Senegal and Mauritania, fishing more than twice as much as they can sustain without shrinking, according to a scientific report by the Fishery Committee for the Eastern Central Atlantic, he said.

The report, which came out last month, a year after the Russian trawlers left, said that even Senegal’s fleet of dugout canoes was taking too much fish and should be restrained.

“It’s very hard to tell local fishermen to stop fishing to feed their country when foreign industrial trawlers are allowed to take away a big catch,” said Daniel Pauly of the University of British Columbia, Canada, who studies developing world fisheries. “Now that that’s been done, Senegal can try to reduce its own take so the sardinella populations can recover.”

Didier Gascuel of the European University of Brittany in Rennes, France, who is one of the authors of the report, said that, “Even if the artisanal catch stays at that level, the sardinella have a chance to recover.”

Noting that the populations of sardinella grow and shrink naturally based on differences in currents and weather, he added, “But if they bring back the industrial trawlers, all it would take is one bad year for the stock to be wiped out.”

Northern West Africa, where nutrient-rich currents well up from the deep, boasts one of the richest fishing grounds in the world, historically affording a bountiful catch to its coastal population and providing tens of thousands of jobs. Senegal’s fishermen are among Africa’s most accomplished and the national dish, the Thiéboudienne, is based on a succulent grouper called the thiof. Other valuable fish as well as lobster and shrimp were also abundant.

But starting in the 1960s, European and Soviet trawlers moved in, scraping rakes fitted with nets along the bottom and destroying the habitat that fish and crustaceans depend on. They sold the fish abroad after paying governments a tiny percentage of its value for the right to catch it.

“Up until the 1980s, the catch was 80 percent bottom fish and 20 percent sardinella, which was known as the fish of the poor,” said Cury, the French scientist. “Now the proportions are reversed.”

“There’s no more bottom fish,” said Abdou Karim Sall, head of the main association of fishermen and no relation to the president. “The sardinella is all we have left.”

Most of the sardinella is soaked in brine and dried, which allows it to keep its nutritional value for long periods without refrigeration. It is sold throughout the arid Sahel region, where the growing season lasts only three months. It’s the main source of animal protein for tens of millions of poor Africans, according to Birane Samb, a Senegalese fisheries scientist.

In 1994, public indignation in Europe and demonstrations in Senegal led to the non-renewal of fishing permits to foreign-flagged trawler fleets. Other countries in Africa followed suit and today, Mauritania and Morocco are the last to have agreements with the EU, and these may not be renewed.

The much-reduced catch eliminated the livelihood of many fishermen, said Sall of the fishermen’s association. “Most Senegalese immigrants to Europe are fishermen,” he said.

But in a move repeated throughout Africa, the owners of many foreign vessels – more than 100 in Senegal alone – simply created joint ventures with locals, took up the local flag, continued bottom-trawling and sent their best catch to Europe. Meanwhile, prices there have increased far beyond what Senegalese can pay, so nearly all of the shrimp, grouper and octopus that the artisanal fishermen can catch is sold right on the beach to middlemen who pack them in ice and put them on planes for Europe a few hours later.

“Sardinella has become rare on our markets, and we have not had any big fish for many years,” President Sall said in his acceptance speech. “And if you can’t even get sardinella for the Thiéboudienne, that’s a problem.”

Ahmed Diame, a Senegalese Greenpeace ocean campaigner, said Sall, a geological engineer, understands science. “If the scientific community can prove to him that bringing back the foreign trawlers will deplete the stocks and the catch, I think he’ll hold off,” he said. “He’s kept his promises so far. The problem is that this is a coalition government and the fisheries minister, who is pushing for foreign permits, is from another party.”