Net Tightens Around Fishing in Egypt 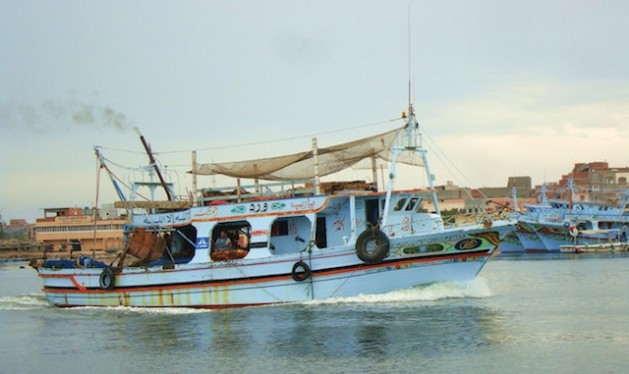 As fishing gets tougher at home, Egyptian boats are venturing into troubled waters. Credit: Cam McGrath/IPS.

ALEXANDRIA, Egypt, Mar 24 2013 (IPS) - For Egypt’s commercial marine fishermen, making a living has never been more dangerous. Egyptian crews driven further afield in search of fish have faced pirate attacks, spent months in dingy foreign prisons, and come under fire from coast guard vessels. Dozens of fishermen have been held for ransom, abused by authorities, or shot and killed.

“Fishing is very difficult in Egypt and often doesn’t cover the cost of fuel and supplies,” Ayman says. “We can catch more fish in Libya (and other countries), but the journey there is risky. We know their coast guard can sink our boat, imprison us, or worse. But we must find fish to support our families.”

Annual production from Egypt’s marine capture fisheries has remained around 125,000 metric tonnes for nearly a decade. But the figures conceal the impact of pollution and overfishing on fish stocks. A significant portion of production now comes from remote fisheries and extra-territorial waters.

Competition has increased as Egypt’s fleet has grown. More than 4,000 commercial fishing boats are licensed to operate in Egypt’s Mediterranean waters and 120 in the Red Sea. Another 40,000 motorless vessels ply the country’s 2,500-kilometre coastline.

Madani Ali Madani, fisheries expert at Egypt’s General Authority for Fisheries Resources Development (GAFRD) says the problem is not overfishing, but rather poor distribution. The vast majority of Egypt’s fishing fleet operates from a cluster of ports at the mouth of the Nile River on the Mediterranean Sea, and from the port of Suez on the Red Sea.

“All these boats are concentrated in a very limited area, and operate not more than five kilometres from shore,” Madani told IPS. “Some have the ability to travel further out to sea, but they insist to work near shore, travelling parallel to the coast until they reach Libya. And that’s where the trouble begins.”

Sami Ibrahim, one of 16 fishermen arrested in 2010 when their boat crossed into Libyan waters told local newspapers he was beaten and humiliated during the nine months the Egyptian crew spent in Libyan custody. He said the fishermen had to buy food at their own expense and were only released after Egyptian authorities paid the hefty fine.

Egypt’s foreign ministry has intervened in cases where boat owners are unwilling, or unable, to secure the release of their crews. Hundreds of Egyptian fishermen have been detained and their boats impounded, according to ministry records.

Madani claims “not more than 10 Egyptian boats” are responsible for 90 percent of the sovereignty violations.

“They are repeat offenders,” he says. “We found that they work on behalf of private Libyan companies but don’t operate under the umbrella of government regulations in order to avoid paying taxes on their catch.”

Fisheries consultant Alaa El-Haweet concedes that some Egyptian crews fish illegally, but points out that many of the seized boats are captured without any nets in the water.

“For years, the western coast of Egypt was kept closed by the military,” he says. “Since it opened about 10 years ago Egyptian boats, especially trawlers, have travelled beyond to Malta, where they are allowed to fish. But to get there they must cross Libyan territorial waters.”

Egyptian fishermen say the westward journey along the North African coast has become an increasingly dangerous game of cat-and-mouse.

In September 2012, the Tunisian coast guard shot dead two Egyptian fishermen and wounded two others when their boat entered Tunisian waters. In May, a Libyan patrol boat opened fire on the ‘Eagle of the East’ after it allegedly drifted into Libyan territory. Four of the boat’s 12 crew members were seriously injured.

Earlier this month, a fisherman was shot in the leg when Yemeni gunmen stormed aboard an Egyptian fishing boat, looted its equipment and cargo, and took its crew hostage.

The “sea rage” incident was sparked after local fishermen claimed the Egyptian vessel, which was licensed to operate in Yemeni waters, had attempted to ram their shrimp trawler and sweep away its nets.

“Competition over fishing territory is fierce,” says El-Haweet. “Clashes are more likely to escalate when a foreign-flagged vessel is involved.”

The search for fish has taken Egyptian boats as far as the Gulf of Aden, where piracy is a real threat. At least a dozen Egyptian fishing vessels have been attacked or hijacked since 2005. Most incidents go unreported. [END]