ALEXANDRIA, Jul 11 2011 (IPS) - Ali Mohsen knows how to tell a good fish story. The wiry, white-haired Egyptian mariner weaves a yarn about his childhood days when the sea was so full of fish that one could simply dangle a hand net over the side of the boat and pull up a seafood dinner. This morning, his crew spent hours out at sea with only four kilos of small fish to show for it. 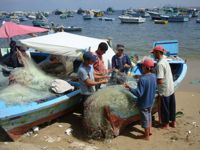 Smaller still are the fish seen in the local market. Fishmongers in this Mediterranean port city sell sardine-sized fish belonging to a species that grows to two kilos when allowed to mature. Mohsen grows visibly angry as he explains how poachers use nylon mist nets known locally as “el-shabah” (the phantom) to catch even the smallest fish, including fingerlings.

“They’re ruining the market for all of us,” he says. “If you catch baby fish, they’re not worth much, but it will keep them from growing to be adult fish and reproducing to make more fish.”

Egypt’s natural fisheries have been in decline since the late 1990s. According to the General Authority for Fisheries Resources Development (GAFRD), the state agency responsible for managing Egypt’s fisheries, Mediterranean fishermen landed 81,000 tonnes of finfish in 2009, a 10 percent decrease from the previous year. Unpublished reports indicate the 2010 catch was even lower.

Diminishing returns have given fishermen more incentive to use illegal and destructive techniques to maintain their meagre incomes. The preferred methods of poaching, according to GAFRD, involve the use of mist nets, floodlights to attract fish at night, dynamite and various fast-acting poisons.

“Some fishermen throw large amounts of insecticide powder into the water and wait a few minutes for the dead fish to float to the surface,” Mohsen explains. “Can you imagine what happens to people who eat these poisoned fish?”

Catching poachers is extremely difficult. While Mediterranean ports are tightly controlled, the vast expanse of sea that buttresses Egypt’s northern coast is beyond police purview.

The coast guard vessels that patrol these waters are on the look out for Israeli naval vessels and illegal arms shipments to Gaza. Catching a boatload of local fishermen dragging a mist net over a shoal is not a priority, nor within their jurisdiction.

“Authorities only control the landing area,” says marine biologist Alaa El-Haweet, a GAFRD consultant. “There is no control out at sea, or in the market… so fishermen can basically catch as much as they want, wherever they want.”

The government limits its regulation to licensing the 4,000 fishing vessels and 40,000 unmotorised boats that ply Egypt’s Mediterranean waters. Port authorities randomly inspect boats for permits and mandatory safety equipment, but rarely bother to search for illegal fishing tackle. Even then, infractions are usually overlooked with a small bribe.

In recent years, the government has also imposed an annual 45-day moratorium on Mediterranean fisheries aimed at protecting wild stocks. Most commercial fleet owners use the May 1 to June 15 period to perform annual maintenance on their boats, which are forbidden from leaving port during the moratorium.

“The ban coincides with the spawning season for 20 (commercially) important species of fish,” explains El-Haweet. “Actually, the spawning season lasts three months, but we couldn’t make the ban any longer because fishermen have to feed their families.”

Fisheries officials say they faced ferocious resistance when they attempted to enforce the moratorium earlier this year. The uprising that forced Hosni Mubarak from power in February is said to have distorted prices and pushed fishermen deeper into poverty, heightening their contempt of regulatory powers. When protests by angry fishermen turned violent, GAFRD decided to abandon the fishing ban altogether.

Madani Ali Madani, a fisheries specialist at GAFRD, says unregulated fishing during the critical spawning season will augment fish production this season, but could harm wild stocks for years to come.

“We tried to clarify that the ban was for their benefit, but fishermen have used the opportunity of the revolution to disobey all regulations,” Madani told IPS. “Some told us they wouldn’t stop fishing because they were using long lines, which they claim do not affect spawning fish. Then the purse seiners said they wouldn’t stop if the long liners didn’t, and the trawlers followed the purse seiners, and so on.”

While commercial fishermen have reportedly targeted fish congregating over their spawning grounds, Madani denies rumours that the absence of authority following Mubarak’s departure prompted a large number of boat captains to switch to mist nets.

“A fishing net is one of the most expensive items in any fishing operation,” he says. “Usually a boat that has a net will use it until it is completely destroyed in about two to four years. We’ve seen no evidence of fishermen changing their gear early.”

However one veteran fisher, who gave his name as Gomaa, told IPS that since the revolution five months ago Egypt’s Mediterranean coastal waters have become a “battle zone.” Competing captains are using mist nets, long-lines, bottom trawling and other destructive fishing methods to land a larger catch.

And while Gomaa acknowledges the damage that these methods cause, he says he too will resort to them if his catch continues to decline.