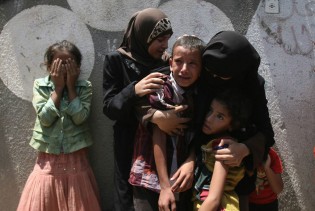 By Thalif Deen
When U.S. President Barack Obama addressed the U.N. General Assembly Wednesday, he was outspoken in his criticism of Russia for bullying Ukraine, Syria for its brutality towards its own people, and terrorists of all political stripes for the death and destruction plaguing Iraq, Syria, Yemen and Somalia.

By Humberto Márquez
Latin America is the region whose governments have taken the firmest stance in support of Gaza in face of the battering from Israel, withdrawing a number of ambassadors from Tel Aviv and issuing harsh statements from several presidents against the attacks on the Palestinian people.

By Barbara Slavin
With U.S.-mediated Israel-Palestinian peace talks once again dangling over the abyss, a new book has kicked up controversy over the roots of U.S. policy toward Israelis and Palestinians.

By Emile Nakhleh
Saudi Arabia’s public anger against the United States masks the kingdom’s growing concern about its diminishing influence in the Persian Gulf and the wider Arab world.
Next Page »
ADVERTISEMENT ADVERTISEMENT