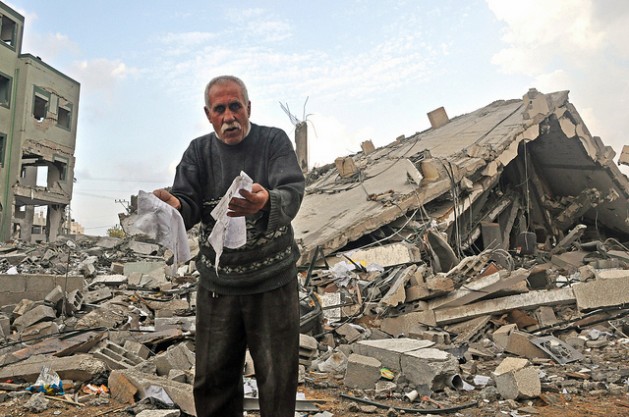 Abu Mohammed, whose family of 15 lost their home after an Israeli bomb attack, unearths papers from the rubble of a civil government office building in Gaza. Credit: Eva Bartlett/IPS

UNITED NATIONS, Sep 26 2014 (IPS) - When U.S. President Barack Obama addressed the U.N. General Assembly Wednesday, he was outspoken in his criticism of Russia for bullying Ukraine, Syria for its brutality towards its own people, and terrorists of all political stripes for the death and destruction plaguing Iraq, Syria, Yemen and Somalia.

But as the New York Times rightly pointed out, Obama made only a “fleeting” reference to Israel and Palestine in his 40-minute speech to the world body.

Nadia Hijab, executive director of Al-Shabaka: The Palestinian Policy Network, told IPS much of what Obama said about the “brutality” of the Assad regime in Syria and his criticism of “a world in which one nation’s borders can be redrawn by another” applies directly to Israel.

"What is remarkable and [bears] mentioning is that despite the tension in the region, despite the Israeli bombardment of Gaza, despite the long and forbidding occupation, despite all this, the Palestinians are yet reasonable and willing to sit and have a debate." -- Vijay Prashad, author of 'Arab Spring, Libyan Winter'
But he simply paid lip service to “the principle” that two states would make the region and the world more just without any indication of what the U.S. might do – or stop doing, she added.

Addressing the U.S. president directly, Hijab said: “Mr. Obama, the world would be a lot more just, if the U.S. just stopped footing the bill for Israel’s gross violations of human rights and international law.”

In his speech, replete with political double standards and hypocrisy, Obama avoided mentioning the killings and devastation caused by Israel with its relentless bombings and air strikes in Gaza – deploying weapons provided mostly by the United States.

“Russian aggression in Europe”, he said, “recalls the days when large nations trampled small ones in pursuit of territorial ambition” (reality check: Israel and its illegal settlements in the occupied territories).

“The brutality of terrorists in Syria and Iraq forces us to look into the heart of darkness” (reality check: the brutality of Israel in Gaza in 2014 and the killings of over 2,100 Palestinians, mostly civilians).

Each of these problems demands urgent attention. But they are also symptoms of a broader problem – the failure of our international system to keep pace with an interconnected world, he added.

Obama also told delegates there is a vision of the world in which might makes right – a world in which one nation’s borders can be redrawn by another (reality check: Israel after the 1967 Six-Day War and its determination to hold onto the spoils of war despite Security Council resolutions to the contrary.)

Obama said: “America stands for something different. We believe that right makes might — that bigger nations should not be able to bully smaller ones, and that people should be able to choose their own future” (reality check: a U.S.-armed Israel, which used its prodigious military strength to prove might is right).

And these are simple truths, but they must be defended, he added.

Obama also said America is pursuing a diplomatic resolution to the Iranian nuclear issue, as part of its commitment to stop the spread of nuclear weapons and pursue the peace and security of a world without them (reality check: Israel, the only country in the Middle East with nuclear weapons and the U.S.’ refusal or reluctance to push for a nuclear-weapons-free zone in the Middle East.).

Vijay Prashad, professor of international studies at Trinity College in Hartford, Connecticut, told IPS it is interesting that Obama wants to insulate the Israel-Palestine conflict from the recent crises in the Middle East.

“Is that possible?” he asked.

“Has Israeli occupation of Palestine not been one of the main points of radicalisation of young people in the region?” asked Prashad, referring to Obama’s concern over the rise in radicalism among youth, specifically in the Middle East.

“What is remarkable and [bears] mentioning is that despite the tension in the region, despite the Israeli bombardment of Gaza, despite the long and forbidding occupation, despite all this, the Palestinians are yet reasonable and willing to sit and have a debate,” said Prashad, author of ‘Arab Spring, Libyan Winter’.

He said there remains, even in psycho-socially battered Gaza, a consensus for a political solution. This the President should have mentioned, he added.

At the conclusion of his speech, Obama said the status quo in the West Bank and Gaza is not sustainable.

“We cannot afford to turn away from this effort – not when rockets are fired at innocent Israelis, or the lives of so many Palestinian children are taken from us in Gaza.”

“So long as I am President, we will stand up for the principle that Israelis, Palestinians, the region and the world will be more just and more safe with two states living side by side, in peace and security,” he added.

Prashad told IPS Obama addressed the rightward turn in Israeli society, and spoke to this toxic social agenda that is against peace and against negotiations.

This second part, which he did say, is very important.

“But it is lessened by the lack of the first point: that the Palestinians remain reasonable despite the war that batters them and the crises around them.”

The writer can be contacted at: thalifdeen@aol.com