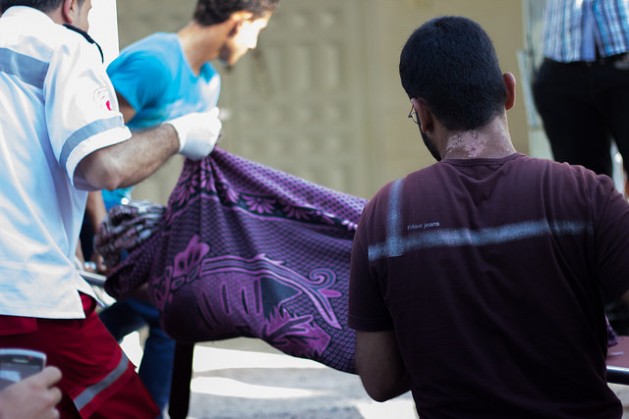 The two-week long conflict has claimed the lives of more than 620 Palestinians, mostly civilians, including over 230 women and children, and over 3,700 wounded, while the Israeli death toll is 27 soldiers and two civilians. Credit: Syeda Amina Trust Charity/cc by 2.0

UNITED NATIONS, Jul 23 2014 (IPS) - The overwhelming Israeli firepower unleashed on the Palestinian militant group Hamas in the ongoing battle in Gaza is perhaps reminiscent of the Algerian war of independence (1954-1962) when France, the colonial power, used its vastly superior military strength to strike back at the insurgents with brutal ferocity.

While France was accused of using its air force to napalm civilians in the countryside, the Algerians were accused of using handmade bombs hidden in women’s handbags and left surreptitiously in cafes, restaurants and public places frequented by the French.

"Unless you have been on the street facing Israeli troops in Gaza, or sleeping on the floor under an Israeli aerial assault, as I have several times while delivering aid in 1989, 2000, and 2009, it's impossible to imagine the total disproportion of power in this conflict." -- Dr. James E. Jennings

In one of the memorable scenes in the 1967 cinematic classic “The Battle of Algiers,” a handcuffed leader of the National Liberation Front (NLF), Ben M’Hidi, is brought before a group of highly-partisan French journalists for interrogation.

One of the journalists asks M’Hidi: “Don’t you think it is a bit cowardly to use women’s handbags and baskets to carry explosive devices that kill so many innocent people?”

The Algerian insurgent shoots back with equal bluntness: “And doesn’t it seem to you even more cowardly to drop napalm bombs on unarmed villages, so that there are a thousand times more innocent victims?”

Then he delivers the devastating punchline: “Of course, if we had your fighter planes, it would be a lot easier for us. Give us your bombers, and you can have our handbags and baskets.”

In the current conflict in Gaza, a role reversal would see Hamas armed with fighter planes, air-to-surface missiles and battle tanks, while the Israelis would be hitting back only with homemade rockets.

But in reality what is taking place in Gaza is a totally outmatched and outranked Hamas fighting a country with one of the world’s most formidable and sophisticated military machines, whose state-of-the-art equipment is provided gratis – under so-called “Foreign Military Financing (FMF)” – by the United States.

According to the latest figures, the two-week long conflict has claimed the lives of more than 620 Palestinians, mostly civilians, including over 230 women and children, and over 3,700 wounded, while the Israeli death toll is 27 soldiers and two civilians.

Speaking of the military imbalance, Dr. James E. Jennings, president of Conscience International and executive director of U.S. Academics for Peace, told IPS, “Unless you have been on the street facing Israeli troops in Gaza, or sleeping on the floor under an Israeli aerial assault, as I have several times while delivering aid in 1989, 2000, and 2009, it’s impossible to imagine the total disproportion of power in this conflict.

“I saw boys who were merely running away shot in the back by Israeli soldiers with Uzi [submachine guns] and arrayed in body armour, and in 2009 and 2012 at Rafah witnessed Israel’s technological superiority in coordinating sophisticated computers, drones, and F-15s with devastating effect,” he said.

The repeated missile strikes ostensibly targeted youths scrambling through tunnels like rats to bring food and medicine to the trapped population, but often hit helpless civilians fleeing the bombing as well, said Jennings.

He also pointed out that in terms of the imbalance in the number of casualties in this so-called “war”, statistics speak for themselves. However, numbers on a page do not do justice to the up-close reality.

“In my work I have visited wounded women and children in hospitals in Rafah and Gaza City and helped carry out the bodies of the dead for burial,” Jennings said.

When military capabilities are that asymmetrical, he said, shooting fish in a barrel is the best analogy.

As for the largely homemade Qassam rockets launched by Hamas, their ineffectiveness is apparent in the statistical results: over 2,000 launched, with only two unlucky civilians killed on the Israeli side.

“That is far less than the eight Americans killed accidentally last year by celebratory rockets on the 4th of July,” Jennings noted.

The billions of dollars in sophisticated U.S. weapons purchased by Israel are under non-repayable FMF grants, according to defence analysts.

And according to the Congressional Research Service (CRS), Israel is also the largest single recipient of FMF, and by 2015, these grants will account for about 55 percent of all U.S. disbursements worldwide, and represent about 23-25 percent of the annual Israeli military budget.

Nicole Auger, a military analyst who covers the Middle East and Africa at Forecast International, a leader in defence market intelligence and industry forecasting, told IPS Israel imports practically all its weapons from the U.S. – and this largely consists of sophisticated equipment it does not produce domestically, or equipment it finds more expedient to buy with U.S. assistance funding.

She said despite a proposed shift in emphasis from air and naval power to ground strength, Israel continues to place priority on maintaining air superiority over all its regional neighbours.

The emphasis on air supremacy and strike capability has resulted in an additional order for F-15I fighters to serve as the lead fighter until the F-35 Joint Strike Fighter is brought into service with the Israeli Air Force (IAF), she said.

The F-15I and F-16I jets, some of which are being used for aerial bombings of Gaza, are customised versions of the American fighters tailored to specific Israeli needs.

Israel has also completed a major upgrade to its fleet of Bell AH-1E/F/G/S Cobra attack helicopters and its Boeing AH-64A Apache helicopters has been converted to AH-64D Longbow standards.

In terms of vehicles, she said, Israel manufactures the majority of its own.

Jennings told IPS two facts are largely missing in the standard media portrayal of the Israel-Gaza “war:” the right of self-defence, so stoutly defended by Israelis and their allies in Washington, is never mentioned about the period in 1948 when hundreds of thousands of Palestinians were forced from their homes and pushed off their land to be enclosed in the world’s largest prison camp that is Gaza.

Secondly, the world has stood by silently while Israel, with complicity by the U.S. and Egypt, has literally choked the life out of the 1.7 million people in Gaza by a viciously effective cordon sanitaire, an almost total embargo on goods and services, greatly impacting the availability of food and medicine.

“These are war crimes, stark and ongoing violations of international humanitarian law perpetuated over the last seven years while the world has continued to turn away,” Jennings said.

“The indelible stain of that shameful neglect will not be erased for centuries, yet many people in the West continue to wonder at all the outrage in the Middle East,” he added.