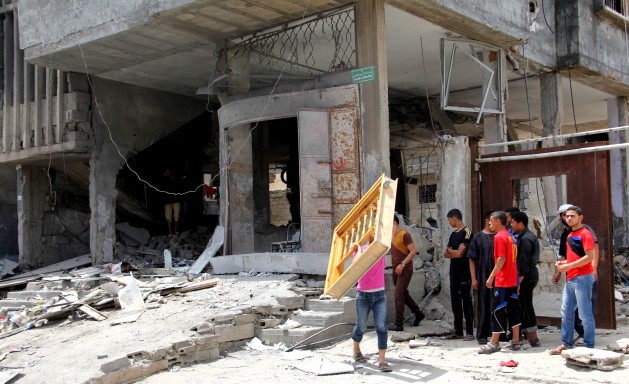 GAZA CITY, Jul 22 2014 (IPS) - As a result of over two weeks of Israeli bombardment, thousands of Palestinian civilians have fled their homes in the north of Gaza and sought refuge in schools run by the UNRWA, the U.N. agency for Palestinian refugees.

Among the worst affected are Gazan children who have been forced to live in constant fear and danger, according to Dr. Sami Awaida, a specialised child psychiatrist for the Gaza Mental Health Programme – a local civil society and humanitarian organization that focuses on war trauma and mental health issues concerning children and adults in Gaza.

“Children in Gaza have already suffered from two recent violent and shocking experiences in 2009 and 2012 … This trauma now re-generates previous pain and shock and also leads to a mental state of permanent fear and insecurity among children here” – Dr. Sami Awaida, a specialised child psychiatrist for the Gaza Mental Health Programme

Describing the impact of the current trauma, Awaida told IPS:  “Children in Gaza are suffering from anxiety, fear and insecurity because of this war situation.  The challenge we now face as mental health practitioners is ‘post-traumatic disorder’.”

“This means that children in Gaza have already suffered from two recent violent and shocking experiences in 2009 and 2012,” he continued. “This trauma now re-generates previous pain and shock and also leads to a mental state of permanent fear and insecurity among children here.”

Since Monday July 7, Israel has subjected the Gaza Strip to a severe military assault and engaged with the Palestinian factions in a new round of violence.

The Palestinian Ministry of Health has so far reported 230 Palestinians killed; most of them are entire families who were killed in direct shelling of Palestinian houses. Meanwhile, the number of injured has risen to 2,500. Many of the injured and the dead are children.

Hospitals in Gaza are currently suffering from a severe shortage of medical supplies and medicines. Ashraf Al-Qedra, spokesperson for the Gaza Ministry of Health, has called on the international community “to support hospitals in Gaza with urgent medical supplies, as Israel continues its military attacks, leaving more than 800 houses completely destroyed and 800 families without shelter.”

Since Israel began its current offensive against Gaza, its military forces have been accused of pursuing a policy of destroying Palestinian houses and killing civilians. Adnan Abu Hasna, media advisor and spokesperson for UNRWA in Gaza, told IPS that “UNRWA has officially demanded from Israel to respect international humanitarian law and the neutrality of civilians in the military operation.”

He added: “UNRWA stresses the need to fulfill the obligations of the U.N. Secretary-General Ban Ki-Moon to immediately stop violence, due to the increasing number of children and women killed in the Israeli striking and bombardment of Gaza.”

Assam Yunis, director of the Al-Mezan Centre for Human Rights in Gaza, spoke to IPS about the stark violations of human rights and the urgent need for justice and accountability. “The current situation is catastrophic in every aspect,” he said.

“Human rights abuses are unbelievable and these include targeting medical teams and journalists, in addition to targeting children and women by Israel.  This points to clear violations of international law as well as war crimes.  Israel must be held legally accountable at the international level.”

He told IPS that the consequences for the Palestinians at the internal level after this military aggression ends will be critical, including “a split between the Palestinian people and the Palestinian Authority; many people will be outraged with the Palestinian leadership, and this of course will leave Gaza in a deplorable state.”

This critical crisis in Gaza comes against a backdrop of a continued blockade imposed on the territory by Israel, widespread unemployment, severe poverty, electricity cuts, closure of borders and crossings since 2006, destroyed infrastructure and a stagnant Gazan economy, combined with a lack of political progress at the Israeli-Palestinian political level.

The real truth that no one can deny is that the civilian population, including women and children, in Gaza are the real victims of this dangerous conflict.