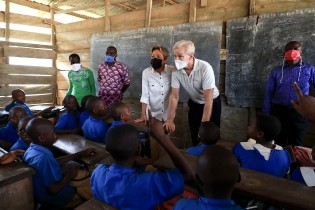 By Marilena Crosato
Ismaila Badji could not bring himself to leave his house for weeks after returning to Senegal. “I failed twice; at school and on the road,” he said. “What's wrong with me? I'm still looking for the answer." After spending time in a Libyan detention centre, Badji returned to where he came from. He did not feel like himself, he lacked motivation and he suffered from stigma from the local community.

By Samira Sadeque
The current pandemic is not only heightening mental health concerns, but might also put many at risk of becoming institutionalised or being neglected by the system.

By Stephen Leahy
About 50 percent of Afghanis over 15 years of age suffer from mental health problems - depression, anxiety or post-traumatic stress disorder. In northern Uganda, nearly every family suffered during the vicious 20-year rebellion during which thousands of children were kidnapped and turned into child soldiers in the Lord's Resistance Army.

By Inés Benítez
Rising rates of depression and suicide are among the most obvious signs of the increase in mental illness resulting from the economic crisis in Spain.

By Emilio Godoy
Since the forced disappearance of his son Jethro in May 2011, Héctor Sánchez has found an outlet for his grief in activism. So far he has turned down psychological support offered by the Mexican Attorney-General's Office and human rights organisations.
Next Page »
ADVERTISEMENT ADVERTISEMENT