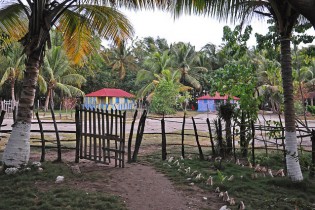 By Judith Scherr
Rodrigo Javier Diaz Guzman was a fairly typical Berkeley, California kid. He loved playing baseball and video games, enjoyed school and got good grades, watched Ninjago on TV, and ate take-out burritos and Chinese food whenever he could.

By Judith Scherr
Several dozen people filled the seats in a downtown storefront Tuesday night to plan how to save a landmark they say belongs to the community - a 99-year-old post office the United States Postal Service wants to sell.

By Judith Scherr
Haiti’s brutal army was disbanded in 1995, yet armed and uniformed paramilitaries, with no government affiliation, occupy former army bases today.

By Judith Scherr
Amber, 24, who’s been living on the streets half her life, was sitting on a sunny sidewalk in downtown Berkeley last week, cuddling her three-month-old puppy and talking to a friend. But if voters approve a measure the city council placed on the November ballot, sitting on the sidewalk – after a warning – could cost her 75 dollars.

By Judith Scherr
The city of Berkeley, California has long been regarded as a leader in the movements for peace, free speech and civil liberties. But this very city is now poised to follow the lead of hundreds of others around the United States where local police deploy armoured vehicles to fight crime and terrorism.

By Judith Scherr
More than 100 people gathered Wednesday outside the gates of Chevron's sprawling headquarters in upscale San Ramon in the San Francisco Bay area of California, where police and security barred those without passes to the shareholder meeting from entering.

By Judith Scherr
With hoes, shovels, some 15,000 seedlings and a bolt cutter to break the locks that kept them out, students, community members and participants from nearby Occupy movements have laid claim to an undeveloped 10-acre parcel since Earth Day, Apr. 22, in Albany, California.

By Judith Scherr
It was May Day and Oakland was bathed in sunshine. Union workers staged militant actions; immigrants and allies marched for justice with brass bands and drummers; spontaneous street parties erupted.

By Judith Scherr
More than 1,000 people took the Occupy Wall Street Movement message straight to the one percent Tuesday, most of them rallying outside the Wells Fargo stockholders meeting in the heart of San Francisco's financial district - and some 30 of them "mic-checking" inside the meeting.

By Judith Scherr
This year, Earth Day in Richmond, California was more than planting organic gardens or exploring solar panels.

By Judith Scherr
A dozen or so people in the Wednesday night crowd of around 150 at the amphitheatre in the public plaza at Oakland City Hall covered their faces with masks or bandanas.