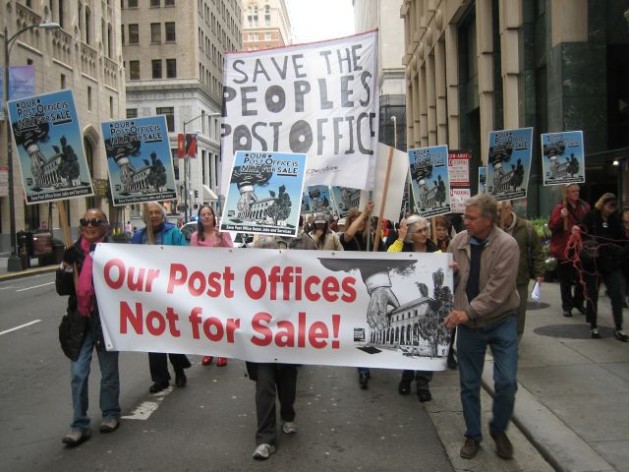 Berkeley activists march in San Francisco from the offices of Richard Blum, chair of realty giant CBRE which is selling post offices for the U.S. Postal Service, to the office of Blum’s wife, Sen. Dianne Feinstein. Credit: Harvey Smith/IPS

BERKELEY, California, Jan 31 2013 (IPS) - Several dozen people filled the seats in a downtown storefront Tuesday night to plan how to save a landmark they say belongs to the community – a 99-year-old post office the United States Postal Service wants to sell.

Berkeley is just one of thousands of cities across the U.S. that has lost or is facing the loss of its post office. For tiny hamlets, such as Deadwood, Oregon with a population of 200, the crisis is not about losing a historic landmark, it’s about losing the community’s gathering place.

Community and postal worker activists disagree. “These (post offices) are the commons,” said Dave Welsh, a Berkeley resident and retired letter carrier. “These are buildings paid for by our parents and our grandparents and our great grandparents. It’s public space. It’s taking our commons away from us.”

No one disputes that the post office is bleeding red ink. Most evident is the increase in electronic communications and decrease in first-class mail. Less known is a 2006 law requiring the Post Office to prepay 75 years of retiree health benefits over 10 years. That costs the USPS about 5.5 billion dollars annually. Adding to the deficit, the USPS has overpaid billions of dollars into pension funds.

Postmaster General Pat Donahoe has asked Congress to adopt legislation that would reverse the requirement to prepay retiree benefits and rectify the pension fund overpayment. He also wants legislators to allow cuts in postal delivery from six days to five – a move that would cut 25,000 jobs according to the National Association of Letter Carriers – and to increase prices on postal products based on market demand.

Speaking at a legislative hearing, the postmaster general underscored the contradiction: Congress expects the post office – which gets no taxpayer subsidies – to perform as a for-profit business, but at the same time Congress has imposed restrictions on pricing and product sales.

While they support the postmaster’s demand to stop prepayment of retiree benefits and rectify overpayments, post office activists and union workers have spoken out against the closures, consolidations and plans to privatise functions.

Some communities are resigned to closure of their post offices or cuts in postal hours, but others are choosing to protest.

Berkeley activists took their protest across the Bay to San Francisco, marching from the offices of Richard Blum, chair of the commercial real estate giant Coldwell Banker Richard Ellis which brokers USPS post office sales, to the office of Blum’s spouse, Sen. Dianne Feinstein. They’re planning a rally at the end of February to greet USPS officials.

The Rural Organizing Project website describes a protest in tiny Deadwood, Oregon: “The Deadwood Pony Express – a pair of giant draft horses – pulled into the parking lot from 10 a.m. to noon while 80 locals rallied to save their Post Office! Everyone in town came, even the local loggers and construction workers. One local construction worker parked their backhoe in the parking lot and put an ‘Occupied’ sign in the bucket! Families shared how important the post office is, ate cookies, signed the petition, and gave the Postmaster gifts of appreciation.”

Jessica Campbell of Oregon’s Rural Organizing Project says downsizing leads to poor service and pressure to privatise. “It’s like the process that privatisers take to privatise social services,” Campbell told IPS. “They defund it or they disable it in some manner and then they can point at it and say, ‘Look how this service is failing. And wouldn’t a private alternative serve us better?’”

In fact, some 800 USPS truck drivers in California are currently in federal court fighting a move by USPS to turn their routes over to private companies. “Some of the big trucking companies – their mouths are watering at the prospect,” Welsh said.

Tom Dodge, a USPS truck driver in Baltimore, Maryland, said the California case is just the beginning of an attempt to privatise 6,900 union trucking jobs across the country. He said trucking companies motivated by profitability, won’t respect the post office mission of delivering mail to customers quickly.

“In the trucking industry, the way they make money, is by running full trucks down the road, so they use the least amount of fuel, and the maximum load in a certain period of time,” Dodge told IPS.

“Applying that to the mail industry isn’t going to work. If you have a scheduled time to get people’s mail delivered, you have to be able to pick that mail up quickly and get it to a sorting facility and back out on airplanes and across the country.”

The service cuts will cost jobs. Postal jobs have declined from 750,000 two decades ago, to about 550,000 today. Union contracts prohibit layoffs for workers on the job for six years, but relocation to available positions is not an option for everyone.

“In this time of high unemployment, the federal government should be creating jobs, not destroying them,” Welsh said.

Steven Pitts, labour policy specialist at the University of California Berkeley Labor Center, said one should look at how cuts at the post office impact whole communities, especially the African American community, given the “greater openness in the public sector” to employ racial minorities.

“We have clear sectors where African Americans are employed,” Pitts told IPS, “and when those sectors get destroyed, that’s what we mean by structural unemployment, structural racism. What’s frustrating is, when people look at the well-being of the Black community, and they look at outcomes in terms of crime and the larger issue of poverty, what people fail to do is look at what’s done to destroy those pillars of success.”

Some activists fear dismantling the post office will eventually lead to privatisation, as has happened in public education and prisons. A recent white paper, “Restructuring the U.S. Postal Service: The case for a Hybrid Public-Private Partnership,” calls for privatising all postal functions except the “last mile” mail delivery.

The “hybrid” post office would slash the number of union workers: “The new system accommodates the ongoing loss of tens of thousands of employees through retirement and separation incentives, including nearly 50,000 mail handlers, more than 100,000 postal clerks, tens of thousands of managers and supervisors, and thousands of other support and overhead personnel,” the paper says.

Edward Hudgins, director of advocacy at the Atlas Society, participated in writing the paper. He told IPS that because the post office is a monopoly, people don’t have the choice of a less expensive vendor. People prefer shopping at Walmart rather than going to a “cute little mom and pop store,” because Walmart goods cost less, he said.

“If you want to have a government monopoly that guarantees extra-high pay – higher than what the market would allow for – that is a problem,” he said.

But Sally Davidow, spokesperson for the American Postal Workers Union, believes the calls for privatisation are disingenuous. “There are people who can’t wait to get their hands on the publicly-owned post office,” she said.