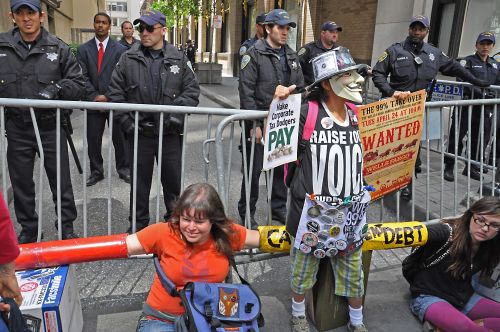 SAN FRANCISCO, U.S., Apr 25 2012 (IPS) - More than 1,000 people took the Occupy Wall Street Movement message straight to the one percent Tuesday, most of them rallying outside the Wells Fargo stockholders meeting in the heart of San Francisco’s financial district – and some 30 of them “mic-checking” inside the meeting.

Protesters, many of whom had come from out of state, targeted what they said was Wells Fargo’s high rate of foreclosure, predatory lending practices, tax dodging and investing in private immigrant detention centres. Wells Fargo is the nation’s largest mortgage lender.

Rev. Gloria Del Castillo, of the Buen Samaritano church in San Francisco’s largely Latino Mission District, came to the protest as part of an interfaith organisation working for economic and social justice. Her understanding of the mortgage crisis is not theoretical.

“I’m here today, not only as a faith leader in this city,” Del Castillo said, before marching to the Merchants Exchange Building, where the shareholder meeting was to be held. “Myself, I’m going through foreclosure right now, thanks to Wells Fargo. I asked them three times for a loan modification so that I could stay in my home, and they refused.”

Barbara Casey was among the limited number of protesters who were able to tell Wells Fargo CEO John Stumpf to his face what they thought. Casey, secretary treasurer of SEIU 503 trade union in Portland, Oregon, was one of the 100 or so demonstrators who had bought single Wells Fargo shares or obtained proxies, allowing them, in principle, to go into the shareholder meeting. And she was one of about 30 who actually made it into the meeting.

Under the banner of the 99 Percent Coalition, one of the organisers of the Wells Fargo protest, actions are being planned to disrupt other shareholder meetings:

May 3, they will target the Verizon shareholder meeting in Huntsville, Alabama;

May 9, the Bank of America Shareholder meeting, Charlotte, North Carolina;

She described the scene inside: “Mr. Stumpf was about to go into the board proposals, but meanwhile he was showing clips about all their profits.”

(According to the Wall Street Journal, Wells Fargo’s profits last year were at 4.25 billion dollars, up from the previous year’s 3.76 billion dollars.)

“As we each made a different remark, the rest of us chanted – that kind of…mic check kind of scenario,” Casey said. “So as we were either initiating a remark or chanting one, one by one, a policeman came for each one of us.” Casey said the officer was polite and said he wouldn’t cite her if she left quietly, which she did.

About a dozen people were reportedly arrested inside the shareholder meeting after Casey and others were removed. Another group of protesters who had blocked entrances were also arrested.

Claudia Reyes was standing with the California Coalition of Domestic Workers and others blocking one of the streets through which shareholders would have had to pass, if they wanted to get into the meeting. (It seems that at least some 250 who were not protesters found ways into the building.)

Reyes said she came to the march and rally both because the domestic workers coalition is concerned that Wells Fargo “is supporting immigrant detention” and because her family had lost their home last year.

“We had been living in it for eight years,” she said. “That was our American dream.” The mortgage doubled at the same time her brother lost his job, and they couldn’t afford it. Bank of America foreclosed.

Reached by phone after the protest, Wells Fargo spokesperson Ruben Pulido said he wanted to correct the record. He said the company didn’t intentionally keep protesters with proxies out of the meeting, but said “there was limited space and we allowed only 250 in.”

Protesters claimed Wells Fargo was an investor in detention centres for immigrants, but Pulido said Wells Fargo doesn’t own stock in companies that manage detention centres. Rather, it “serves as an adviser to a mutual fund” that includes the GEO Group, which manages private prisons, he said. He added that immigration policy is made in Washington and Wells Fargo “doesn’t take a position on immigration.”

Protesters called Wells Fargo “tax dodgers”, and placards read, “Make corporate tax dodgers pay.” According to a report by Citizens for Tax Justice, Wells Fargo paid 3.8 percent in federal taxes between 2008 and 2011. Pulido said the company paid six billion dollars in taxes for 2011 and 33 billion in federal taxes over the previous 10 years.

As for foreclosures, Pulido said they’ve been able to resolve issues with people whose loans are 60 days past due in seven out of 10 instances. Citizens for Tax Justice says “Wells Fargo is one of the top banks foreclosing on Californians and had 17.5 billion dollars worth of foreclosed homes on its books nationally as of June 2010.”

Pulido added that he was “pleased that we were able to complete all the business items on the agenda as planned.”

John Shaban was among the protesters who own one share of Wells Fargo stock and was ready to go into the shareholder meeting. Interviewed early in the morning, just after Shaban had completed training that was aimed at helping people make non-violent decisions about what to do when faced with possible arrest, he said he hoped to tell Wells Fargo officials and stockholders that they should make better decisions when it comes to foreclosing on properties.

Foreclosure takes the property off the tax rolls and lowers property values in the entire community, he said.

Interviewed later in the day, Shaban said he wasn’t among those who made it into the meeting. But he said nonetheless that the day of protest was a success. “It sent a message loud and clear to Wells Fargo and the giant banks that the 99 percent has had enough,” he said. “By any means necessary, we’re going to get that message across to the banks.”