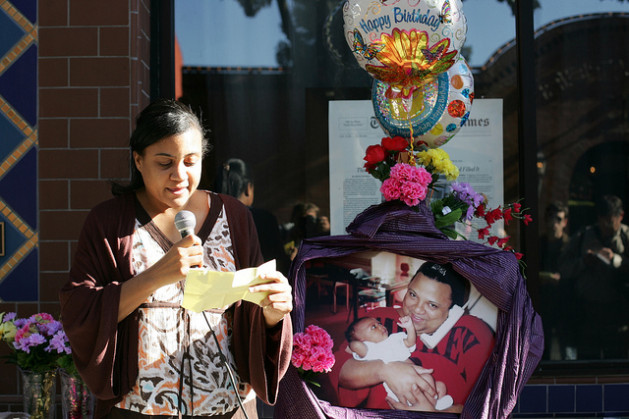 Kayla Moore, in photo with her infant niece, suffered a mental health crisis and died in police custody. She is remembered in a community birthday celebration by her sister, Maria Moore. Credit: Doug Oakley/IPS

BERKELEY, California, U.S., Nov 26 2013 (IPS) - Just before midnight on Feb. 12, Kayla Xavier Moore’s roommate dialed 911. Moore, 41, a paranoid schizophrenic, was off her prescription meds and highly agitated. The roommate thought he knew the drill – Moore would be taken to a psychiatric hospital, stabilised with medication and allowed to go home in 72 hours.

That’s not what happened. Finding Moore had an outstanding warrant, Berkeley police decided to take her to jail. When they tried to handcuff her, Moore, who was also African American and transgender, resisted – and died.

"All of a sudden there would be these invisible people in the apartment coming after her and she’d have to move again.” -- Elysee Paige-Moore

Moore was not creating a disturbance and presented no threat, her sister Maria Moore told the community at a meeting on the incident.

“When you put your hands on someone who is a paranoid schizophrenic, who does not trust police, they are going to fight that,” she said. “If [police] had just stopped for a minute instead of trying to be enforcers, had listened and found out what the situation was about, Kayla would be alive.”

Police involvement in the death of people with mental health emergencies is not uncommon. In fact, an investigation by the Portland Press Herald/Maine Sunday Telegram one year ago estimated that at least half of the 375 to 500 people shot and killed by police in the United States annually suffer from mental health issues.

Arthur Moore remembers the day he brought his first-born child home from the hospital and the joy Xavier brought the family. (This article refers to Xavier, the child, in the masculine and to Kayla, the adult, in the feminine.)

“Xavier was always a happy child. Whatever he focused on, he would focus on it with a lot of joy and a lot of intensity,” Arthur Moore said in an interview at the family home. “He was very bubbly and curious about everything.”

On Nov. 6 in Burlington, Vermont, Wayne Brunette’s mother called the police and told them her adult son, who had a history of mental illness, was acting irrationally. The police chief told the Burlington Free Press that when officers arrived, Brunette came from the house “brandishing a long-handled pointed spade shovel and advanced toward the officers in a threatening manner.” Two minutes later, police shot and killed Brunette, a father of two.

In May of this year, Else Cruz of New Rochelle, New York called 911 seeking medical help for her husband, who had become agitated. When police arrived, she told them that he had schizophrenia and bipolar disorder, but did not have a weapon. Minutes later he was fatally shot in the chest.

On Sep. 25, 2012, Mohamed Bah, 28, a student in finance at Bronx Community College, was shot and killed by New York City police officers in Harlem. As in other cases, the incident was triggered because Bah's mother had called 911 for medical assistance, expecting an ambulance.

As he grew older, Xavier was found hiding twice for extended periods, something the family would come to see as an early sign of his illness.

As an adult, Kayla Moore was haunted by voices and often chose street drugs over prescribed medicines. Known by friends and family as a poet, talented cook and hilarious impersonator, Moore lived in shelters, the streets, cheap hotels, the family home and finally in a subsidised apartment.

She’d settle in a new place, “then all of a sudden there would be these invisible people in the apartment coming after her and she’d have to move again,” said Elysee Paige-Moore, Kayla’s stepmother.

Police reports indicate that Kayla Moore initially cooperated with police on the night she died, stepping outside the apartment to speak with officers. But when they told Moore she was going to jail, she rushed inside, demanding to speak with the FBI for confirmation.

Police called for backup. Officers struggled with the 347-pound Moore until she lay on her stomach on a mattress on the floor, with several officers straddling her to place her in handcuffs and ankle restraints. When she stopped struggling, officers rolled Moore to her side. Police say she was breathing then, but soon stopped breathing and could not be revived.

Some Berkeley police have completed 40 hours of specialised Crisis Intervention Training, but no CIT officer was available when Moore was in crisis, and Berkeley’s Mobile Crisis Team of mental health clinicians clocked out at 11 p.m.

“If you’re going to be in a mental health episode in Berkeley, make sure you’re going into it during business hours,” Berkeley Mental Health Commissioner Paul Kealoha Blake quipped at a community meeting.

Shifting out of “cop mode”

Crisis Intervention Training is premised on the principle that people experiencing mental health distress need compassion and treatment, not jail.

“The tactics we are taught in the academy often are not the best tactics for dealing with someone in crisis,” Philadelphia Police Captain Fran Healy says in “An Integrated Approach to De-escalation and Minimizing Use of Force,” published by the Police Executive Research Forum.

“We reiterate to our officers that they need to shift out of ‘cop mode’ in these situations…[CIT] gives the officers an awareness of when they have to change their approach and shift more to ‘social worker mode,’” Healy writes.

Initiated in Memphis, Tennessee in 1988, Crisis Intervention Training teaches officers recognition of mental illnesses, de-escalation techniques, and the principle of “diverting people that have serious mental illnesses away from the criminal justice system and back into the community system of care,” said Officer Jeffrey Shannon, Berkeley’s CIT coordinator.

Just eight percent of Berkeley police are CIT trained, though Shannon hopes that will grow to 20 percent. Most of the 2,000 communities with CIT programmes train a fraction of the force; Portland, Oregon trains the entire department.

Partnership with the mental health community is the heart of CIT training, said Laura Usher, CIT programme manager with the National Alliance on Mental Illness, which co-founded the Memphis CIT.

Many communities have Mobile Crisis Teams of mental health professionals who respond to people experiencing mental health distress. The downtown Oakland, California MCT partners with police and is available weekdays for about nine hours each day.

Stephanie Lewis, who heads the team, explains that when police get a call saying, for example, that a loved one is agitated, pacing or yelling, the MCT will respond. First police make sure the situation is safe, then clinicians try to connect with the individual, calling the person by a name they prefer, modulating their tone of voice, and, especially, showing respect, Lewis said.

Collaboration with police has been built over 10 years, said George Karabakakis, head of Health Care & Rehabilitation Services, the nonprofit that employs the embedded mental health staff.

“It’s not something you just say – ‘We’re going to embed someone in the police department,’” Karabakakis told IPS. “There has to be a lot of preparatory work to build those connections.”