This story is part two of a three-part series on the challenges faced by people living with disabilities in a world where intense storms and other natural disasters are expected to become the "new normal". 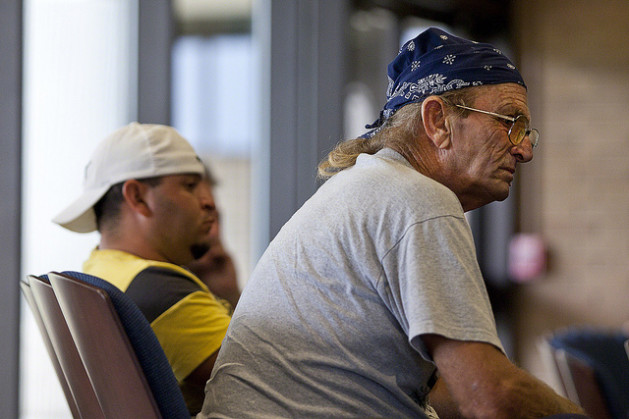 A fisherman and other Gulf Coast residents at a community meeting in New Orleans in 2010. Experts say that trauma related to the record-breaking BP oil spill in the region could last for decades. Credit: Erika Blumenfeld/IPS

NEW YORK, Aug 15 2013 (IPS) - Although Hurricane Sandy made her final sweep through the Northeastern United States nearly 10 months ago, for many people the stress caused by the storm lingers.

(See Part One and Part Three of the series)

In Lower Manhattan, two hotlines, the Disaster Distress Helpline (DDH) and Project Hope, which is part of the New York City-wide helpline Lifenet, and specifically for those affected by Sandy, are at the frontline of disaster counselling, listening to myriad concerns ranging from queries about post-storm open hours of drug rehabilitation programmes to anxious parents reluctantly sending their children back to school in the days after the Newtown, Connecticut school shooting last December. Both programmes are administered by the Mental Health Association of New York City.

Part of the Solution

As the United Nations launches the world’s first ever survey asking persons with disabilities around the world about their experience preparing for and living with disasters, IPS examines the impact of both natural and human-made disasters for people with disabilities in New York City and worldwide.

Persons with disabilities are often left out of municipal emergency planning meetings, and many believe that their voices fall silent when it comes to preparing for life-or-death situations. Over 80 percent of the world’s disabled population live in developing countries, according to the United Nations Development Programme (UNDP), and disabled people are more likely to die and become injured than non-disabled people in disasters.

Mental health during disasters is also an overlooked issue. In the United States, the Disaster Distress Helpline (DDH), first nationwide, phone-based crisis counseling service went live in 2012 and has proved to be a crucial resource for those struggling in the aftermath of hurricanes, mass shootings and terrorist activity, receiving spikes in calls and texts from people who are anxious and worried.

Building on the phrase used by the disabled community, “Nothing about us without us,” experts from FEMA to Handicap International, as well as those who specialise in emergency management training for disabled people, stress the need for more inclusive planning, and including those very people decisions are being made for in the planning process.

“Typically the kind of disasters that result in a spike of calls at the national level are those that are larger in scale. The impacts tend to be greater in terms of loss of life, loss of property or the potential for psychological distress on a sizeable population,” Christian Burgess, director of the DDH, told IPS.

Following the Sep. 11, 2001 attacks on New York City, there was a need for a nationwide, phone-based crisis counselling service, Burgess says. The Substance Abuse and Mental Health Services Administration (SAMHSA), an agency within the Department of Health and Human Services (DHHS) established the National Suicide Prevention Lifeline in 2005, but created an entirely separate hotline for disaster counselling after the 2010 BP oil spill.

Transitioning from the Oil Spill Distress Helpline, the DDH went live in February 2012, receiving its first major spike in calls following Hurricane Isaac, which tore through the Gulf Coast on the seven-year anniversary of Hurricane Katrina.

“It’s not therapy, it’s not a substitute for therapy. Really, it involves listening,” Burgess says, comparing the helpline to triage for mental health.

Counsellors are trained to listen for symptoms of distress that may indicate the need for crisis intervention, like suicidal or homicidal intent, and callers may also be at risk of depression or substance abuse.

The DDH saw spikes in calls after the Newtown shootings, in which a lone gunman killed 20 elementary school students and six staffers, and the Boston Marathon bombing in April, as well as the Oklahoma tornadoes in May.

“School shootings in particular tend to trigger stronger feelings of distress, simply because it’s easier for a large part of the population to identify with the sadness and grief,” Burgess says. “It shakes our foundation of what is supposed to happen, the order of things… especially if you were already feeling vulnerable before the event.”

Burgess says that the majority of calls following the Newtown shooting didn’t come from Connecticut, but from all over the country.

After a major disaster, repeated coverage on the 24-hour news cycle, sensationalised headlines and the easy accessibility of Internet allow for the vicarious trauma of rewatching distressing events, which adds to anxiety, Burgess says.

“The event in and of itself is traumatic… but it’s heightened by the constant media exposure, particularly for those who would have been at risk before the event,” Burgess said.

Trigger events still loom, like the State Department’s closure of 19 U.S. embassies across North Africa and the Middle East in early August. The DDH have received calls from people concerned about what the terror alert means, Burgess says.

Calls related to Hurricane Sandy marked the first time the DDH received sustained levels of calls over a period of time, Burgess says. At its peak, Sandy resulted in a 2,000 percent increase in calls from two weeks prior, before the forecasts began to take shape. Texts increased by 600 percent.

“In December we were starting to get longer calls from people, and mental health concerns were coming to the surface,” Burgess says, due to fewer resources and the emotional fatigue of still-displaced people.

Melany Avrut, programme manager for Project Hope, which has received nearly 4,000 calls since the hurricane, told IPS that the needs of callers have changed. In the weeks following the storm, callers wanted to know about filing FEMA applications, but six months later, there were more concerns about anxiety, mood and children having trouble sleeping.

“A big component of Project Hope is using your strength… recognising what [people] have used in the past to get them through a hard time,” Avrut says. “They want to talk about what it was like to go through this traumatic experience.”

The World Health Organization (WHO) recently released new guidelines on how to care for those with mental health issues following trauma. The guidelines emphasise the use of behavioural therapies, such as cognitive-behavioural therapy (CBT) and eye movement desensitisation and reprocessing (EMDR) rather than relying on medications.

Although unusual, EMDR can be effective, Dr. Mark van Ommeren, a scientist in the WHO’s department of mental health and substance abuse, told IPS.

It likely works when a patient, focusing on the traumatic event, follows a therapist’s hand with their eyes. The working memory is taxed as the patient thinks about both the event and their eyes working to track the hand. The painful memory becomes less prominent, and upon revisiting the memory, it is less vivid and emotional in the long-term memory, van Ommeren says.

For people living in disaster areas who are vulnerable to mental health issues, van Ommeren suggests that stress management is a good way to prepare, as it makes going through difficult moments a slightly easier, adding that there are no concrete studies about this.