NEW ORLEANS, Louisiana, Apr 15 2011 (IPS) - As the one-year anniversary of the record-breaking BP oil spill in the Gulf of Mexico approaches, mental health experts and social scientists warn of decades of impact on Gulf residents. 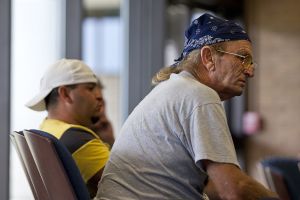 A fisherman and other Gulf Coast residents at a community meeting in New Orleans. Credit: Erika Blumenfeld/IPS

On Apr. 20, 2010, the Deepwater Horizon oil rig exploded, triggering a months-long disaster that would end only after at least 4.9 million barrels of oil, and at least 1.9 million gallons of toxic chemical dispersants, had been injected into the Gulf of Mexico.

The environmental destruction, while massive, is still only in the beginning stages, and experts warn that it will take decades to see the full consequences.

For Gulf residents, fishermen, and business owners, the same amount of time is expected for their struggles with depression, anxiety, anger, fear, and other psychological impacts directly attributed to this human-made disaster.

“People are on edge,” Dr. Janet Johnson, an associate professor of psychiatry at Tulane University, told IPS. “People are feeling grief. I’m hearing of physical illnesses related to the oil and people are worried about losing their home, their culture, their way of life.”

“People are becoming more and more hopeless and feeling helpless,” Dr. Arwen Podesta, a psychiatrist at Tulane University in New Orleans, told IPS. “They are feeling frantic and overwhelmed. This is worse than [Hurricane] Katrina. There is already more post-traumatic stress disorder (PTSD) and more problems with domestic violence, threats of suicide and alcohol and drugs.”

Dr. Podesta, who also works in addiction clinics and hospitals, said, “It’s a remarkably similar experience to that of the stressors of Katrina. There is an acute event, but then a long-term increase in hopelessness with every promise that is broken. Like a promise for money to rebuild a life, then people are put through red tape and each time they fail to move forward, they take five steps back in their psychological welfare.”

Many of the broken promises Dr. Podesta refers to stem from the lack of adequate financial compensation for those who have suffered financial losses directly because of the disaster.

Sociologists studying the current BP disaster, along with other human-made disasters, make a distinction between “natural” and “technological” catastrophes.

“What we find in our field when we study technological disasters, i.e., human-made disasters, is that the impacts are chronic,” Dr. Anthony Ladd, a professor of sociology at Loyola University, explained to IPS.

“They don’t really end,” Dr. Ladd explained. “With a natural disaster, like Hurricane Katrina, people move through it. They actually end up building a stronger community, there’s more social capital [trust] going on in the community and people find they have to rely on each other.”

“But with technological disasters, you don’t get that. It’s a very different spiral into a malaise, into anxiety, into a feeling that there is no end in sight. You don’t know when the impacts are going to stop,” he said.

Oil and tar balls continue to wash ashore across Louisiana, Mississippi, and Alabama, along with dead newborn dolphins and endangered sea turtles. The fishing and tourism industries are suffering, and residents have been shown they cannot trust their local, state, or federal government to deal adequately with this ongoing crisis.

Dr. Ladd, whose major area of research centres around the impacts of environmental disasters on communities, draws direct parallels between the BP oil disaster and the Exxon Valdez disaster.

“So on top of everything else the disaster throws at you, then you have the decade-long experience of trying to litigate your way back to your economic livelihood or trying to get some kind of economic compensation for what you’ve lost and of course that never comes,” he said.

Using the 1989 Exxon disaster as an example of this, in 2008 a corporate-friendly Supreme Court took the original five-billion- dollar judgment against Exxon from 1994 and ended up granting only one-tenth the amount, 500 million dollars, to the citizens of Cordova, Alaska.

“So they weren’t able to save their businesses and many weren’t able to stay in the community,” Dr. Ladd said. “The litigation process itself is a huge source of anxiety and we’re not anywhere near seeing what that’s going to be like in this case, given that the dimensions of this disaster are way beyond what we saw in Alaska.”

Dr. Irene McIntosh, an associate professor at the University of South Alabama, works as a counselor/educator.

“After a storm you can do something,” Dr. McIntosh told IPS. “But with this, you really are at the mercy of BP and the folks in charge, as to how much you can do. So it’s a very disempowering sense that is prevalent.”

Dr. McIntosh admits to feeling much of the same anxiety and anger that people she has listened to are experiencing.

“I don’t know that I’ve ever seen the level of distrust of any government entity in the people here,” she said, “I don’t believe any of these [officials] either. After being lied to so efficiently and thoroughly for so long, and I mean shut down and told you cannot talk about this, I’m cynical. I’m furious, and there is nothing I can do.”

Dr. McIntosh told IPS she is concerned about the long-term psychological impacts of this disaster.

“That is what I’m concerned most about because any time you’re under long-term stress, whether it’s economic, you’re losing your home or boat and your business, then those translate into experiences of depression, increased family chaos, increased difficulty with interpersonal relationships and a decrease in self-efficacy that I can take care of myself and my family,” she said.

“There is anger that exists throughout our region and it’s an anger of feeling betrayed by those who were in charge, that they didn’t make sure there were legitimate steps taken to respond to this,” McIntosh added.

“We need to stop thinking of this as a sprint and think of it as a marathon. This disaster and its impacts are going to go on for at least a decade and it could be more. It’s hard to put into words the astronomical ways in which this disaster is likely to affect the Gulf Coast.”

“The total number of years this will affect us is unknown,” Dr. Podesta said, adding, “However, it could affect us for possibly 20 to 30 years.”