Stories written by Dahr Jamail
Dahr Jamail is the IPS lead writer on Iraq. In that capacity he has covered Iraq directly and extensively on the ground, and at other times organised reporting out of Iraq. Several of his breaking news stories could not be covered by any other media organisations. Jamail is author of the eye-opening book ‘Beyond the Green Zone: Dispatches from an Unembedded Journalist in Occupied Iraq’. Besides reporting from within Iraq for eight months, he has been covering the Middle East for five years. A regular correspondent for IPS, Jamail has also contributed to The Independent, The Guardian, the Sunday Herald, and Foreign Policy in Focus, among others. His reporting has been translated into French, Polish, German, Dutch, Spanish, Japanese, Portuguese, Chinese, Arabic and Turkish. 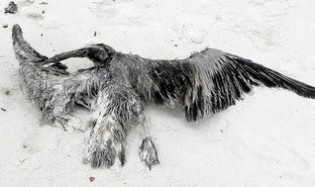 By Dahr Jamail
The aftermath of the Fukushima Daiichi nuclear crisis has been marked by an outcry in Japan over radiation leaks, contaminated food and a government unable to put the public's fears to rest.

By Dahr Jamail
Attorney Kenneth Feinberg, paid by BP to administer the firm's 20-billion-dollar compensation fund, has become the focal point of anger for Gulf residents who are angry, frustrated and desperate for help following last year's massive oil disaster.

By Dahr Jamail
As the one-year anniversary of the record-breaking BP oil spill in the Gulf of Mexico approaches, mental health experts and social scientists warn of decades of impact on Gulf residents.

‘No Safe Levels’ of Radiation in Japan

By Dahr Jamail
In a nuclear crisis that is becoming increasingly serious, Japan’s Nuclear Safety Agency confirmed that radioactive iodine-131 in seawater samples taken near the crippled Fukushima Daiichi nuclear power complex that was seriously damaged by the recent tsunami off the coast of Japan is 4,385 times the level permitted by law.

By Dahr Jamail
A first-of-its-kind lawsuit alleging gross negligence and fraud has been filed in a Florida state court against Kenneth Feinberg, the administrator of the 20-billion-dollar compensation fund for victims of BP's Gulf oil spill, and the Gulf Coast Claims Facility (GCCF).

EL SALVADOR: Women at the Forefront of Grassroots Organising

By Dahr Jamail
Women are playing a leading role in a powerful social movement addressing natural resource protection, adaptation to climate change, and corporate accountability in this coastal village in El Salvador.

By Dahr Jamail
In an emotionally charged meeting this week sponsored by the National Commission on the BP Deepwater Horizon Oil Spill, fishermen, Gulf residents and community leaders vented their increasingly grave concerns about the widespread health issues brought on by the three-month-long disaster.

By Dahr Jamail
Gulf coast fishers, conservationists, seafood distributors and oil workers rallied here at Louisiana's capital over the weekend to demand that oil giant BP be held accountable for the "ongoing" use of toxic dispersants in the Gulf of Mexico.

By Dahr Jamail
Massive slicks of weathered oil were clearly visible near Louisiana's fragile marshlands in both the East and West Bays of the Mississippi River Delta during an overflight that included an IPS reporter on Oct. 23. The problem is that, despite this, the Louisiana Department of Wildlife and Fisheries has left much of the area open for fishing.

IRAQ: After False Promises, the Heat Is On

By Dahr Jamail
Iraqis promised development with the ouster of Saddam Hussein and the arrival of the U.S. are now suffering lack of development as never before. And where it hurts every moment is through the collapse of power supply.

By Dahr Jamail
Another massive fish kill, this time in Louisiana, has alarmed scientists, fishers and environmentalists who believe they are caused by oil and dispersants.

By Dahr Jamail
The U.S. state of Mississippi recently reopened all of its fishing areas. The problem is that commercial shrimpers refuse to trawl because they fear the toxicity of the waters and marine life due to the BP oil disaster.

By Dahr Jamail
BP says it is no longer using toxic dispersants to break up the Gulf of Mexico oil spill. Gulf Coast residents claim otherwise, and say they have the sicknesses to prove it.

By Dahr Jamail
Contrary to recent media reports of a quick recovery in the Gulf of Mexico, scientists and biologists are "deeply concerned" about impacts that will likely span "several decades".

By Dahr Jamail
Shellfish in the Gulf of Mexico grow with drops of petroleum inside them, coyotes eat oil-soaked birds, and sharks suffocate when the oil coats their gills.

By Dahr Jamail
Last week, the U.S. Coast Guard, working in concert with oil giant BP, instituted new restrictions across the U.S. Gulf Coast that prevent the media from coming within 20 metres of booms or response vessels on beaches or water. But the insidiousness of the restrictions runs even deeper.

By Dahr Jamail
The assassination of Sheikh Ghazi Jabouri, a prominent Sunni Imam in the Al- Adhamiya district of Baghdad, has raised fears of renewed sectarian violence in the wake of the Mar. 7 elections.

By Dahr Jamail
The March elections have only deepened political divisions, and brought more violence.

By Dahr Jamail
Under Saddam Hussein, women in government got a year's maternity leave; that is now cut to six months. Under the Personal Status Law in force since Jul. 14, 1958, when Iraqis overthrew the British-installed monarchy, Iraqi women had most of the rights that Western women do.
Next Page »
ADVERTISEMENT ADVERTISEMENT